Newsletter
Sign Up today for our FREE Newsletter and get the latest articles and news delivered right to your inbox.
Home » Imperials Car Club – Originals – Lowrider Image 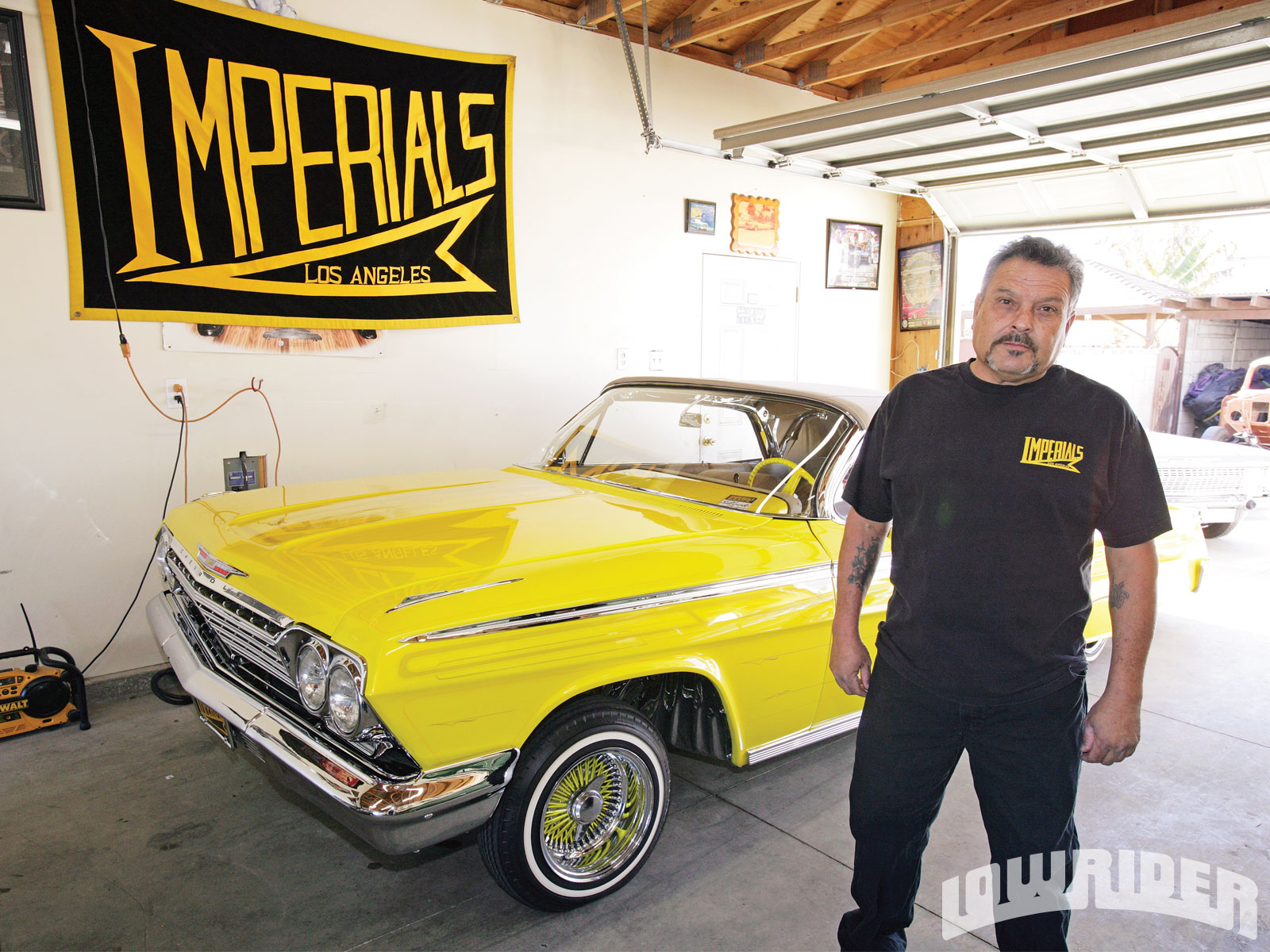 The tales of the older clubs in our Culture usually springs forth a few common names; the Dukes, Groupe, Klique, and of course, the Imperials. The Imperials are one of the few older car clubs that still influence the newer car club generations today. With that in mind, it’s safe to say that they have quite a legacy behind them; encompassing the club’s beginning, internal clashes, a lawsuit, and the eventual takeover.

Fast forward to this current generation, and you will find that the face of the Imperials is actually two faces; those of leaders Tomas Vasquez and Junior Garcia. This duo took over the club and never looked back, as they had established their leadership qualities by building several cars and helping to unify the club’s chapters into one mean, lean machine. In their own words, this is their account of the story behind the Imperials, and how they came to be a united club.

Tomas: Times are little different now. In 1968, $20 bought you a mounted 5.20; now, $100 won’t even buy you a tire! At 14 years old, I had a 1961 Impala that I used to race Mustangs, Gran Torinos, and Camaros until that Roadrunner came out. Once I lost to that car, I had to trade it in for a 1963 Impala. When I was 16 and able to have a license, I packed my stuff and left the fields of Northern California and headed to L.A. Once I got there, my cousin Sergio said ‘what are you doing with that Lowriding machine?’I looked at him and told him, ‘This is how we roll up in Northern California.’ [laughs.] A week later, the car was lowered on 5.20s and Astro Supremes, and I never turned back; it was one Lowrider after another! I got in the club in 1971 towards the end of 1972. As soon as I got in the club, I sold my 1970 Monte Carlo and bought a new 1973 Caprice. Two weeks later, it was lifted and people used to tell me, ‘You’re crazy. How are you going to put hydraulics on that new car?’ I just had to have the hydraulics; I was addicted to the juice. Then I took a leave in 1975 when the club decided to have a party with the Lady Bugs, and the club didn’t want any of our wives or girlfriends there because a lot of the guys wanted to hook up with the chicks. So, I got out and didn’t return until the ’90’s when I heard that some of the old members were coming back after the club had broken up. I checked it out and it was true. Jesse, David, and Mike Riviera had come back so I came back, too. Even during the time I wasn’t in the club, I never stopped building cars. I think I made a good decision; I’m still married to my wife, and some of those guys weren’t lucky enough. Junior: I was Lowriding in 1982 and I had a 1968 lifted front and back. We used to cruise Whittier with it, before I sold it and bought a ’64 Impala. I also lifted that car front and back and fitted it with True Spokes. Growing up in Hawaiian Gardens, I used to cruise all the time; it was a small community–I even got to hang out with the Tovars. Then I got married and sold my car to buy a house and start a business. I was sidelined until the ’90’s after I talked with my wife and I told her that it was time for me to get another toy. The kids were all doing well in school, we had bought our home, and the business was doing well enough to finally turn a profit. I thought it was the right time and I bought my ’66 Impala, which would be the car that I would get into the club with back in 1999.

Tomas: Junior and I really hit it off, and when we were ready for a road trip, neither one of us hesitated. Jesse couldn’t travel, but he was lucky enough to see some of the country while on tour with Lowrider. Naturally, when he took his “Gypsy Rose” on tour cross country, we followed suit. We just decided to take it to the next level with all of the other chapters. Being in the Mother chapter, we needed to be able to keep some kind of standards and some control within the club. Some people thought we were too strict with our chapters, but we just opened the San Diego chapter. That chapter would have never happened had we not travelled and met people the way we did.

Junior: I see the club going in the right direction now, as long as we can keep the right leaders running the club. The way the club is going currently; I think it’s a more family oriented club then it is a competitive club. I know there are other clubs that take this Lowriding lifestyle too seriously; we’d rather hang out at a park and have a good time meeting with new people. We also need to give our wives due credit for helping us to be where we are at today. My wife was my high school sweetheart; we’ve been married for over 25 years. She’s always known how much I’ve been into cars and nothing has ever changed. She’s been my backbone and support in this lifestyle that I live.

Tomas: In our club, we try to change out our officers once a year when we have elections. This year, Junior decided to step down after several years of being the Vice President, because we wanted Jesse to come back as VP. As long as I can remember, Jesse ran or was involved with the club, and he only stepped down because of his health. As Junior said, as long as the leadership is there, this club will continue for quite a long while. We have great members and the club is growing; recently, we even had WWE wrestler David Bautista join the club. What I like about Lowriding now is that Lowriding has changed and gone mainstream. I’ve been to more car shows now that I’m older than I ever had the chance to before. Now, with Lowrider Magazine reaching the status it has, we look forward to going to even more of these top-notch shows. These shows have the best cars around and the people at the shows are great, too.

LRM is proud to feature these two leaders and remains grateful for the insight they shared with us about the tradition of the Imperials throughout the years. Ride on, fellas!