Newsletter
Sign Up today for our FREE Newsletter and get the latest articles and news delivered right to your inbox.
Home » Frank Castillo – Lowrider Image 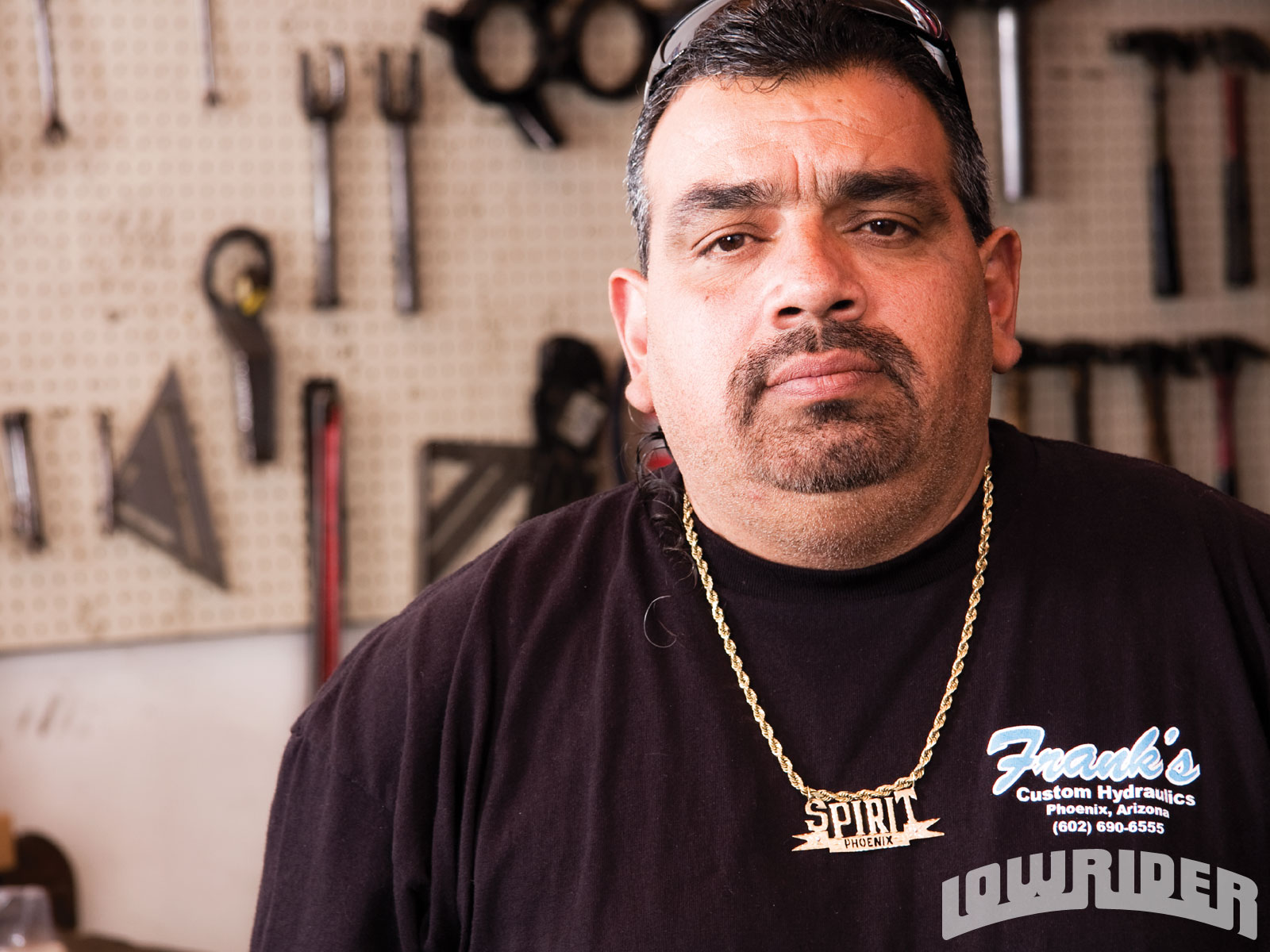 This month, LRM proudly pays tribute to Mr. Frank Castillo of Phoenix, Arizona. Frank holds the record in Arizona for the oldest Lowrider Hydraulic Shop, and though that in itself is a great accomplishment, we are paying tribute to a Lowrider Icon who has lead one of the most prominent car clubs in Arizona, Spirit Car Club of Phoenix, for three decades. As the longstanding president of Spirit, Frank is celebrating the club’s 30th anniversary this August. Frank’s Custom Hydraulics, the life blood of this Phoenix Lowrider Legend is celebrating over 25 years in business; and with good reason; he built its legacy one pump, dump, and cylinder at a time.

Born in South Phoenix, the year that the Deuce Impala made its debut, Frank was exposed to the onda first hand in the neighborhood he grew up in, while attending Carl Hayden High School. His friends, Manuel Moreno, J.R. and Bobby Gonzalez, along with Frank, later became founding members of the Sofisticated Few Car Club. Frank was part of the Few’s grand opening days, spending hours cutting out cars in his garage at home during the late ’70’s. They traveled to car shows throughout the Southwest, and while in town, cruised South Central, where O’Keefe’s Drive-in was the hop pit for many of the first hydro systems to compete. Imagine being among the first to witness premium Sportways defy gravity! This is where Frank began to fine tune his craft, and found his true passion in making Lowriders ride low and lock-up high.

All car clubs go through cycles; and a few years later, Frank began concentrating his efforts into a new business with close friend Joe Montenegro, who was a member of Spirit Car Club, Los Angeles Chapter. Once Frank and Joe opened The House of Hydraulics, the Lowrider scene in Phoenix hit a new high. Frank and Joe decided it was time to bring Spirit C.C. to la Phoeniquera and with the blessing of Lowrider Hall of Famer Buggs Ochoa, founding father of Spirit L.A., they brought the Plaque to Phoenix in August of 1980. Soon after, Frank and Joe also made their mark in Hollywood, creating special effects for movies and television shows. Frank recalls that they had a great time and had a lot of fun tearing cars apart and creating effects for Chevrolet and Ford television commercials. The two men also created special effects in the motion pictures “To Live and Die in L.A,” and “The Running Man.”. In 1985, Joe moved permanently to L.A. for his work, while Frank transitioned the shop into Frank’s Custom Hydraulics in 1986, becoming the new President of Spirit, Phoenix Chapter in the process. He strived to ensure that the Phoenix Chapter met the pre-established standards, and that he would let no one down. Frank ensured that with Spirit Car Club showing 40 plus cars deep at most every car show they participated in, they would continue to set the bar high in Phoenix. The sign you have arrived as a Class A Car Club, is the day you have a hard lineup at the Arizona Super show inside the beautiful Phoenix Civic Plaza, and with less than a few years of building this club, Spirit did just that under Frank’s leadership. Candies, flakes and pearls made up the Spirit line-up, and going head to head with their California brothers made for a great Lowrider competition. Thirty years later, Spirit continues to represent AZ and their Plaque with honor and pride.

Frank’s Custom Hydraulics became a household name in Lowrider circles around Phoenix, as well as within all the major shops in the Southwest. Whether he came and hopped at your shop, or you came to his shop, the street hop scene was extremely exciting when Frank was on the switches. Frank’s shop was also active in the Lowrider community as a sponsor for many hops in Arizona, including the sponsoring of the Mesa Super Show, where Reds, Hi-Lo, Wizards, Showtime, and countless other shops would come to Mesa and compete.

Frank’s Hydraulic credentials include hopping against, with, and for, many of the industry leaders, such as Rag top Ralph, Pump man Eddie, Steelman of Otto’s Hydraulics, Gary Mays, and countless others. Frank recalls doing hydraulic work on Ephraim Lopez’s Lowrider before Reds Hydraulics hit the Lowrider scene. Learning his trade amongst Otto’s, Orlies, Andy’s, and Rag Top Ralph aren’t exactly bad credentials! Getting to see the shops change over the past 30 years has been interesting, but Frank admits that the one thing that doesn’t change is the competiveness that flows through these hydro masters’ veins. The need to see your car fly is contagious, and undying, that’s for sure. Frank and past LRM Publisher Alberto Lopez were good friends, as it was Frank’s shop that installed the tricked-out hydraulic system in the famous Lowrider mini-truck owned by Lowrider Magazine. Frank also had a brief encounter as an Official Lowrider Magazine Hop Judge, but when Alberto gave him a yellow staff shirt to wear, Frank politely bowed out, telling Al he wears black, not yellow. To this day, Spirit C.C. shirts are black with white lettering, and Frank refuses to wear anything else. Frank currently has a few cars doing 80 plus to 100 inches, cementing his reputation as one of the fiercest street competitors to travel across the country and compete against other shops and hoppers. While he has done much in many arenas, street style is still where he has the most fun.

Frank also is active in keeping the “Spirit” of Lowriding alive by mentoring the younger members of his club, and teaching them to become leaders. He notes that his skill set is always challenged, and he keeps a watchful eye on the new technical advancements available to progress the art of hopping. Frank states that while he has met so many people throughout his career, he continues to learn by networking with his Lowrider peers, including the younger guys that have the desire to excel. He feels this philosophy has been the key to keeping his club and business alive and well for all these years.

Frank has been blessed with a successful business and Car Club, but the true blessings are his three children; his sons, Frank Jr. and Mike, and his daughter Cynthia. His family continues to flourish with his grandchildren Alice and Mike. Frank’s wife, Lisa, keeps a good eye on her grandchildren, and ensures that the family is taken care of. When the “King of the Street” doesn’t have a tool in his hand, he spends family and personal time relaxing with grandkids, camping, fishing, and playing in the dunes. You have to recharge the batteries sometime, and no one knows that better than him!