Newsletter
Sign Up today for our FREE Newsletter and get the latest articles and news delivered right to your inbox.
Home » In The World Of The Viejitos – Car Club Profile 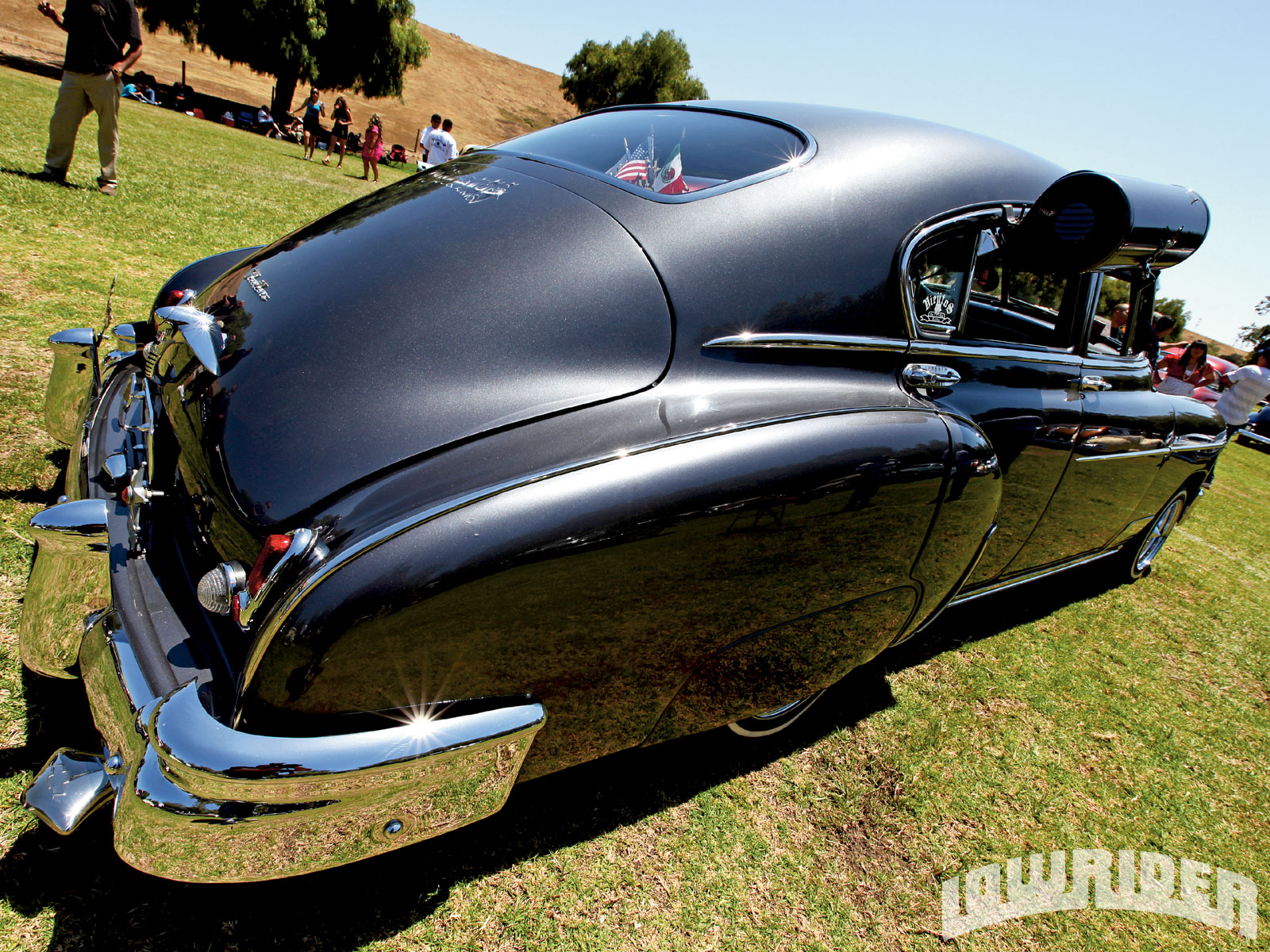 September 16th is the date that the people of Mexico celebrate Mexican Independence Day. For obvious reasons, the day is very special to the people of Mexico, and is also highly regarded by people of Mexican descent. The date is also a special date to the Viejitos Car Club, as it is on this date, back in 1985, that the club was established in Lynwood, California.

Albert “Lobo” Rivera and “Crazy” George Luna had been Lowriding for years, and decided that they needed to start a club based on the ideas the two shared and believed in. Sure, there were plenty of established car clubs around at the time, but none were attractive to them, as they did not have the structure they were looking for. They wanted to start a club that would unite owners of Bomb-type cars and trucks, who shared the same passion that they did for preserving classic automobiles.

The first order of business was to establish a club name, a plaque design, and outline some membership requirements. The word Viejito roughly translates to “old man,” so George and Albert decided to use the name to represent the type of vehicles they wanted for the for the club; “old cars.” A plaque design was drawn up for the club that incorporated an “old man” in the design. The requirements that Albert and George were seeking in potential members included respect, unity, and the value of friendship. They simply believed that club members had to respect one another and that club unity needed to be a focus, in order to have a fun atmosphere that would ensure that the club would not just be about cars, but about friendships as well. If you’re respectful and you’re dedicated to your family and club, then you’ll find a home with the Viejitos. Even though these requirements were set forth, the club runs with the “no rules, no dues” credo.

After the initial chapter was established in 1985, the Viejitos Car Club began to grow rapidly in the 1990’s. Chapters were established all over Northern and Southern California, including San Jose, Orange County, San Diego, and Oxnard. Since then, chapters have been established throughout the continental United States as well. Illinois, New Mexico, Texas, Nevada, and Oklahoma are some of the states that have become a home to Viejitos chapters. The club also has international representation with chapters in Jalisco, Mexico, and chapters in Australia and Japan. At press time, there are over 30 chapters of Viejitos worldwide. In the year 2000, Viejitos were also named club of the year by Lowrider Magazine. This legendary club has also been featured in local newspapers, automotive magazines, and television shows like “Latination.”

The club cars have to be made before 1959, although models from that year are also permitted. Potential members have to remain dedicated to restoring these classic automobiles to better than factory, or brand new condition. The stoic Chevrolet brand is a large part of the club members’ rides, however, Pontiac, Buick, Packard, Plymouth and Cadillac brands are also represented in the Viejitos. George Luna’s 1936 Packard B120, Ralph Durazo’s 1938 Cadillac LaSalle, and Jimmy Gustamantes’ 1936 right-hand drive Packard are just three of the many unique rides in the club. The club has seen its share of success through a number of show-winning rides, all of them hailing from various chapters around the world. Recently, San Jose chapter members Henry and Yolanda Palacios’ 1951 Chevy truck named “SJTrokita” took third place in the sweepstakes truck class at the 2009 Lowrider Magazine Super Show in Las Vegas. The truck features quite a bit of detail, and was completed in a 10-month period. The finishing touch on every Viejitos club car is the siren. The club uses sirens from ambulances, fire trucks and any other type of emergency vehicle that they can get their hands on. The club believes so strongly in the sirens, that they even trademarked them for the club. Yes, it’s true, a registered trademark!

A large part of the Viejitos’ belief system stems from community service and outreach. Each and every one of the club’s chapters remain active within their respective communities. They participate in community sponsored events, such as toy drives each year during the holidays, which help to give toys to the kids in their communities that would not otherwise receive a holiday present. Feeding and clothing the less fortunate are two other key components of the club’s community service. In addition, youth outreach is also a big part of the club’s community involvement. The club teaches the youth in their communities that there is more to life than getting caught up in drugs, gangs, and criminal activity. They have turned Lowriding, something that was once frowned upon by society, into something very positive for the youth of today and their communities at large.

The club is not just about the member, it’s about the member and his or her family. Members’ families are included in all of the club’s events. The Viejitos feel strongly that they have the most supportive families, and remain dedicated to thanking them and acknowledging them for everything they do for the club. This club is about more than just restoring cars and cruising in them; it’s about bringing families together and raising the next generation of Viejitos in a positive environment. George and Albert stress that without the support and participation of the family, the club would not be successful. One of the club’s biggest supporters was George’s dad, who lent his support to the club from its infancy until his untimely passing. His spirit will always be a part of the Viejitos. The club is one big family under one roof, and chances are, the next time you hear someone yell “who’s in the house,?” you’ll probably hear the response “Viejitos in the house!”

What does the club have planned for the future? They are still expanding their presence throughout the United States and abroad. In January of 2010, a chapter was started in Phoenix, Arizona. The club is planning a 25th anniversary event, sometime in the summer of 2010, as well. The chapters will continue to produce and participate in car shows and community events within their communities and surrounding areas. Given the huge presence of the club, the next time you hear a siren while you’re driving, it just might be a member of the Viejitos!