Newsletter
Sign Up today for our FREE Newsletter and get the latest articles and news delivered right to your inbox.
Home » Twisted Minds Bike Club – Nothing ‘Twisted’ About These Minds 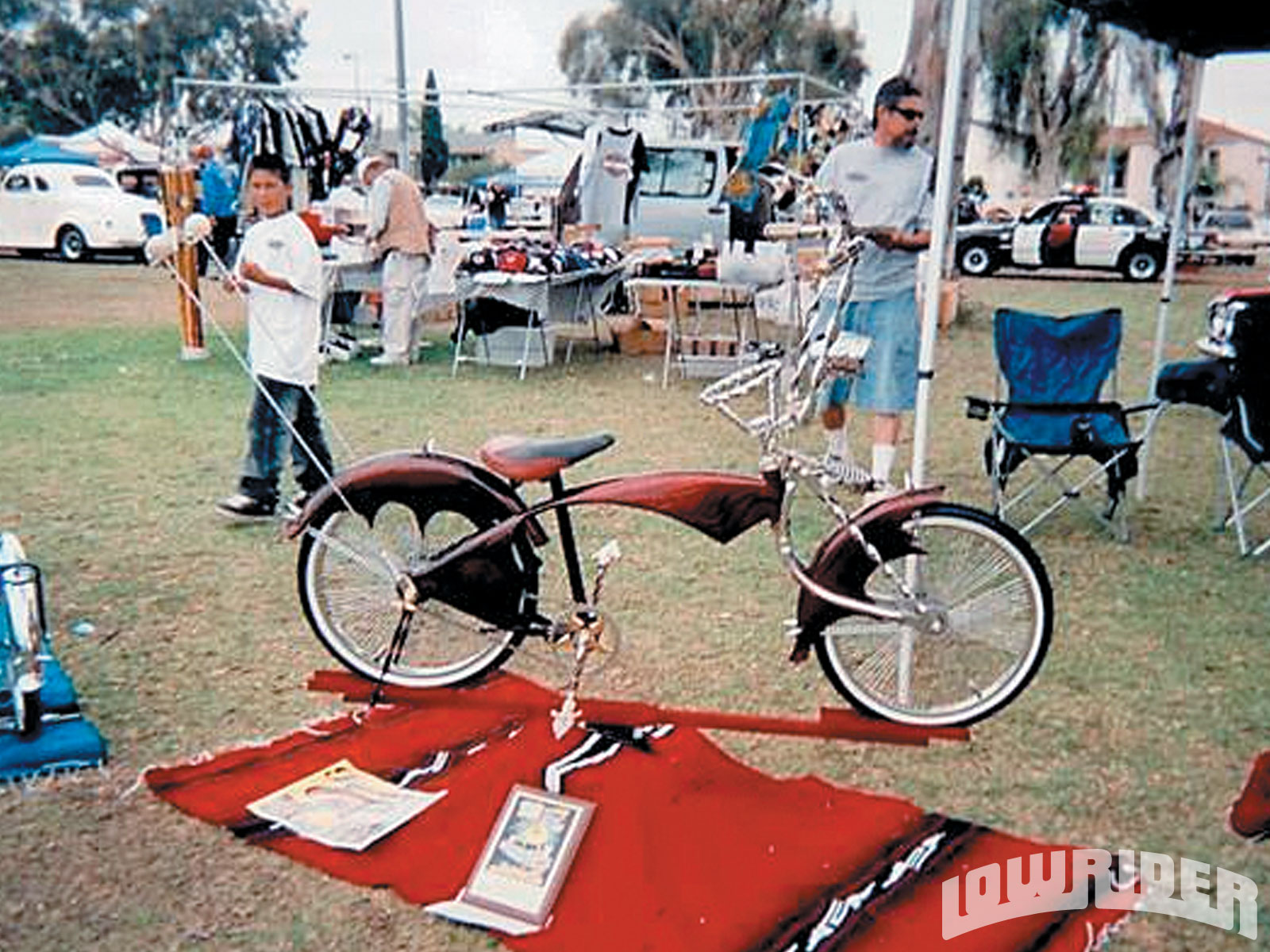 When Mike Mejia founded Twisted Minds bike club in 1998, he never imagined they would be around eleven years later. Mejia, a 20 year lowriding enthusiast, describes the feeling shared by ‘customs’ enthusiasts as “pride and accomplishment in building something beautiful, from the ground up.” When asked how they got the name Twisted Minds, Mejia shared it was a spectator who saw the bikes on display with incredible chrome parts twisted this way and that, and said, “It must take some sort of twisted mind to be that creative.” They liked that comment and that’s how the name came to be.

Twisted Minds is an educational, all volunteer-led, labor of love for its members and adults mentors. It currently has eight active members: brothers Caesar and Chris, Jessie and Tommy, George, Miguel, Ana and Amilia. Twisted Minds is the only bike club allowed for membership in San Diego’s exclusive Lowrider Council. The Council has high standards and a probationary period where applicants must have “show quality” cars and bikes but also participate in community events. The Council motto is “strength in unity”, and so in deference to that motto, Twisted Minds volunteers in the community and conducts blood and bone marrow drives, toy drives, fundraisers, bike exhibitions at schools and participates in local and out of town shows. They are quick to point out that the Council doesn’t accept just any club that wants to join—let alone a bike club. It’s a phased process comprised of standards at the 3 year mark, and after 5 years of Council membership, the club is eligible to have its club plaque inscribed on a pillar at the cultural landmark that is San Diego’s iconic Chicano Park. Twisted Minds has two years to go, and they are confident that coveted accolade will be theirs.

But why start a low rider bike club? Founder Mike Mejia said, “…my father was a lowrider so I ‘inherited’ his passion. As an adult I noticed there were a lot of kids that attended shows but there wasn’t a lot to keep them interested. I had a bike in the garage that I decided to start working on. I noticed that the kids in the neighborhood would come by and just want to hang out and give input to my bike. We started with one bike and then from there as interest grew so did the club. I think that giving them a positive outlet builds their self esteem. When they compete in shows and walk away with a trophy that motivates them to want to continue to upgrade their bikes. I know that this passion will eventually turn into cars.” A feeling shared by others.

Seventeen year old Twisted Minds member, Cesar Gastelum, involved since he was 14- shared that he enjoys fixing and working on bikes and is looking forward to building his own lowrider in the future, just like his dad has. He also likes that their club gives back to the community through volunteering and fundraisers. His younger brother, eleven year old Chris Gastelum said, “It makes me feel proud, just to know that I built my bike.” You see it in his demeanor. Pride in accomplishment, hard work and ownership begins for young Chris, a love affair with custom bikes and later custom cars unfolds. But it’s no easy thing. You must pay your dues. The bike club is that gateway. “It’s like a rite of passage, from being a kid to a teenager to an adult… what bikes do is ‘turn them on’ it literally gives a kid another outlet to develop him/herself…” said Norman Paraiso, a 30 year low riding enthusiast and proud owner of Moving Violation, a pristine ’64 Impala convertible.

Its not difficult to see that the effort and thought invested in building a bike will result in an object of pride and perhaps access into the exclusive and often clickish world of prestigious car clubs, you know them: Lifestyle, Imperials, Majestics, Southside…to name a few. Undoubtedly, the personification of meticulous work, a sense of community, laced with many hours, or years of diligence to build memorable show pieces.

After all is said and done, there’s no doubt that aesthetically, the custom bikes are sweet. Even a girly-girl like me would’ve wanted one of these amazing bikes to cruise around in my Lomas neighborhood of Tijuana as the cute 11 year old proud owner of the sparkly purple, basket-wielding, banana-seat sporting Schwinn—ridden 24/7 that summer… Imagine a bike club with mentors for us, back then? Yes, bike clubs may give kids a glimpse of what building the holy grail of the lowriding culture can be: your own wicked car; but make no mistake, they fundamentally do one other profound thing: they build character.

About the author: Linda Caballero Sotelo is a freelance writer and Hispanic marketing expert based in Southern California. She may be reached at Lsotelo@toltecmedia.net