Newsletter
Sign Up today for our FREE Newsletter and get the latest articles and news delivered right to your inbox.
Home » Rigoberto “Rigo” Reyes of Amigos Car Club 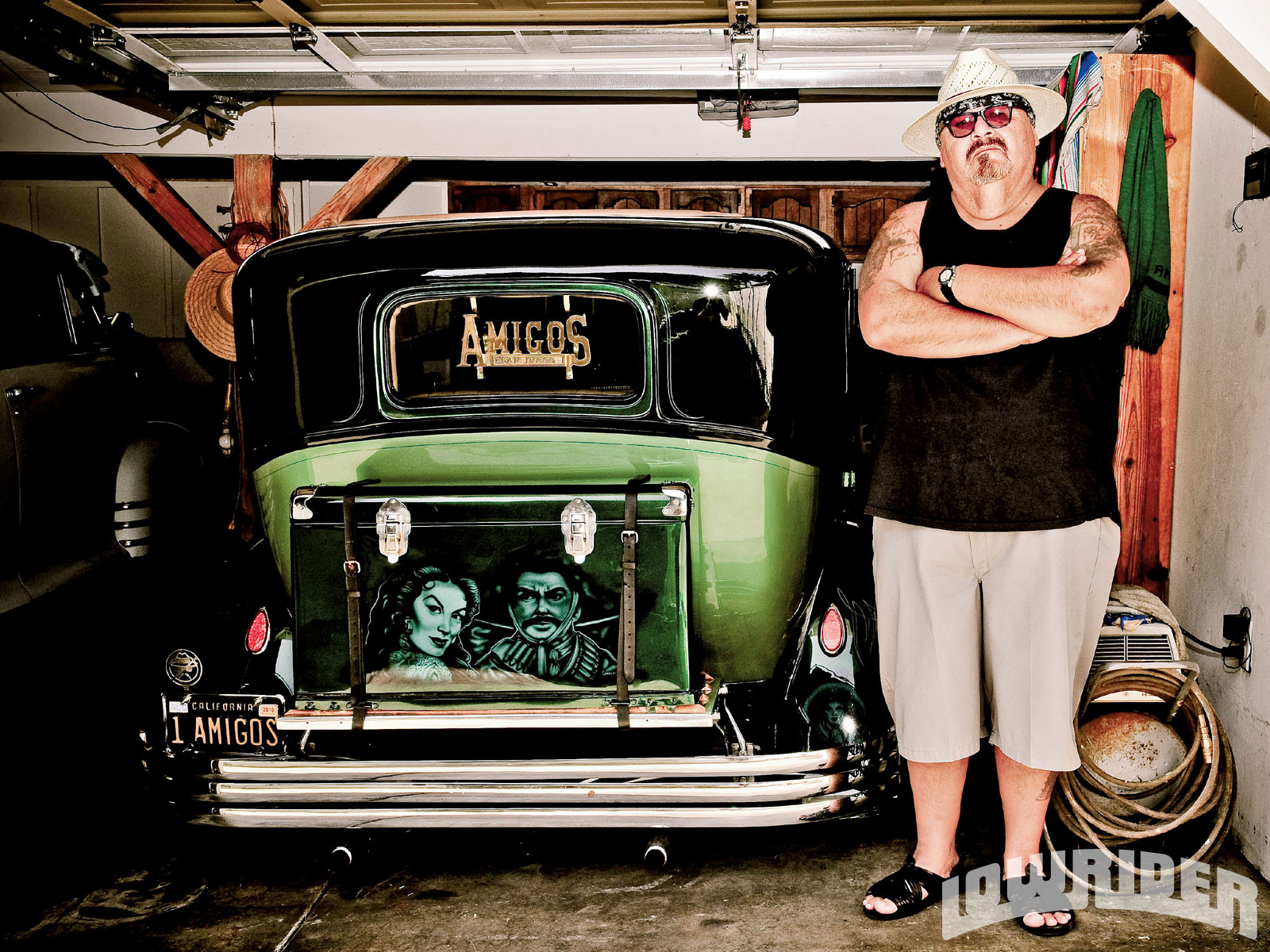 The city of San Diego, California certainly has its own unique place within the rich history of the Lowrider culture. From the car shows at the legendary Chicano Park, to the lawsuit filed by The Lowrider Council and Committee on Chicano Rights to stop the local police from shutting down Highland Avenue in National City, the city has certainly seen its share of historical events within our culture. Rigoberto “Rigo” Reyes was one of the many Lowrider advocates that were instrumental in achieving the desired goals in both of these historic events, while also promoting a positive image of Lowrider Culture throughout the city. Our culture has been uplifted through the efforts of Rigo and his contemporaries, and through his many years of service to the Lowrider Movement, Rigo has never lost his focus.

Born in San Diego, California, Rigoberto “Rigo” Reyes was raised in Tijuana, Mexico until he was 7 years old, when Rigo and his family moved to San Ysidro, California. The Reyes family stayed in San Ysidro until Rigo was 12, before ultimately settling back in San Diego, a city that Rigo has called his home ever since. As is the case of most Lowrider enthusiasts, Rigo was first introduced to the Lowriding Culture by an older friend. Living in San Ysidro at the time, Rigo’s older brother had a friend who had a lifted 1957 Chevy. The car was lifted in the front, but when the guy laid his car on the ground, it was love at first sight for Rigo. Unfortunately, Rigo was only about 11 years old when he experienced this seminal moment, so his dream of riding low would have to wait a few years before it could be ultimately realized. At 17 years old, Rigo got his first car, a 1957 Chevy 4 Door. Rigo wasted no time, instantly modifying the car with suicide doors and lifting it on all sides. At the time, people were experimenting with hydraulics on the back end of vehicles, so Rigo tore apart the whole trunk and put in a bridge that would help the Chevy withstand the up and down motion.

There was a lot of turmoil within the neighborhoods of San Diego during the early 1970’s, and Rigo was trying his best to stay out of trouble. Although the right wing bias in the media considered the issues in the neighborhoods “gang issues,” Rigo and his peers never considered themselves to be in “gangs” or to be “gangsters”. They were just kids that grew up within the same neighborhoods. Since Rigo had his car and the Lowrider fever, there was no time for neighborhood drama. The culture provided a way out for Rigo, for him, It was all about Lowriding and the Chicano Movement.

Rigo was also devoting a lot of his time to the Chicano Movement, hoping to bring about social change and opportunities for Mexican-Americans. He had been directly influenced by Cesar E. Chavez and the United Farm Workers (UFW) while growing up in San Ysidro, and looked to let that influence guide him towards working for Chicano rights. Rigo and his family lived in apartments in San Ysidro that did not have a designated play area, so they would play in the city’s Civic Center. While playing in the city’s Civic Center Rigo found himself mesmerized by Cesar’s speeches, and felt pride in seeing the Brown Berets in the area. Those encounters were a big influence on Rigo, and they ultimately shaped him as a man. When he moved back to San Diego, he took his activism and appreciation for Lowriding to another level. It was more than just a way for him to keep busy and out of trouble, he now saw it as an upward movement for Mexican -Americans. With 57 strong on the streets of San Diego, it was time to find other Lowriders, and really put the city on the map.

San Diego had already seen the emergence of some notable car clubs. The Latin Lowriders, Nosotros and Chicano Brothers got started in the area during the 1960’s. Brown Image, New Wave and Klique were also active in San Diego at the time. While attending Montgomery High School, Rigo also came across a club called the Casinos. Most of the neighborhood kids considered the Casinos more of a social club and the club was often chastised because of this status. Rigo had no interest in the Casinos while in high school, until his good friend Joe Flores joined the Casinos and invited him to a meeting. Rigo was hesitant at first, but he eventually attended a meeting and found the club to be very different than they were during his high school years. The Casinos were down to 4 or 5 members and invited Rigo to join, asking him to help them build the club back up. The club changed colors, changed plaques, and of course changed their image. The final goal was to establish a car club that was recognized on the United States side of the border, since the Casinos had been primarily recognized on the Mexican side, due to the fact that the club spent most of its time in Tijuana, rather than San Diego. Hanging out across the border was not what Rigo liked to do, he preferred to cruise in San Diego, and wanted the new Casinos to make a name for themselves in the city. This first appearance of the Casinos would foreshadow the group to eventually become Amigos Car Club.

Two or three years after the re-invention of the Casinos, people were still associating the club with the party scene across the border. In order for Rigo and the club to be properly recognized on the U.S. side, a change had to occur. The Casinos were still not considered a Lowrider club, and they were not getting the credibility or clout they were looking for. Something had to change, and this led to a difficult decision for the club. The club was rebuilt and reestablished with about 18 members, who were willing to do whatever it took to achieve their status. Half of the club was in agreement that something new needed to be established, while the other half wanted to stay with the same name and continue on as they had originally been. This formed a dividing line among the members that ultimately led to the birth of something new. When Rigo and the other members finally decided to start a new club, the other remaining members became upset, and decided to end the Casinos. The group moved on, and the task now was to find a new name for the new club.

For the next three or four months, meetings were held to come up with a new name. Nothing would stick, and the members had a tough time agreeing on a name. Rigo and a couple of the other members who also grew up in the Chicano Movement were looking for a name that would reflect that influence, but some of the other members were not on board, having not grown up in the Chicano Movement. The task of finding a name was wearing on the guys, and causing tension among members. An unlikely source would help finalize the name selection. One of the ex-members of the original Casinos had a cousin in Los Angeles, California, whose boyfriend was a member of Amigos ELA. During one of his many trips to Los Angeles to see his family, he mentioned to his cousin’s boyfriend that there were some guys in San Diego looking for a club name. The boyfriend instructed him to ask the guys in San Diego if they would be interested in starting a chapter of Amigos in San Diego. After a couple of weeks of conversations, the ex-Casino member returned to San Diego with the name and the plaque. It was unanimous; everyone saw the plaque and agreed that the name represented what they were trying to accomplish. The boys got together with the Amigos from East LA, and as the saying goes, “the rest is history”. Rigo and his peers officially started the San Diego Chapter of Amigos Car Club in 1977.

The club was soon seen all over the streets of San Diego. The SD chapter of Amigos was formed during a time when Lowriders were being targeted by the authorities and there were “car club wars” going on, so Rigo used his background in activism to help organize the car clubs in the city.

In 1979, Latin Lowriders, in conjunction with Lowrider Magazine, organized an event at Chicano Park. They called for a meeting of the car clubs at the Chicano Federation Building. The goal of the meeting was to unite the car clubs, and to promote a positive image of Lowriding. From that meeting, the San Diego Lowrider Car Club Council was formed, and Rigo was one of the founders of the Council, he even wrote the mission statement. In 2009, the Council celebrated its 30th year anniversary. Rigo was an activist before he was a Lowrider, and he was also a member of the Chicano Park Steering Committee before the SD Amigos were formed. Naturally, this hometown car club would represent the city as part of the car show at Chicano Park. Rigo and the Amigos have been the car show coordinators for the past 26 years. Over the years, Rigo and the Amigos have been honored by the city of San Diego for their community service and their dedication. Rigo and the Amigos have also helped to bring Lowriders into the Balboa Automotive Museum in San Diego. In addition to these contributions, numerous San Diego based magazine and newspaper articles have featured Rigo and the club.

Even with all of his community involvement, and time spent running the club, Rigo has managed to build other unique Lowriders outside of the 1957 Chevy that initially got him started in the culture. Rigo built a 1959 Impala, which he named “Azteca.” The Impala sported a unique combination of flakes and candies, and Rigo eventually sold it to the Japanese in the early 1990’s. He now has a 1929 Willy’s Knight that is lifted all the way around, and painted with plenty of candy and pearl. The interior is fully stocked with leather, and the Willy’s has quite a few modifications. His next project is a 1948 Chevy Fleetline, which he is taking his time in building, as he wants it to become his daily driver.

Rigo has been an outspoken critic of Lowrider Magazine for a number of years, and in fact, he led a boycott against LRM back in 2002. He felt Lowrider Magazine had commercialized Lowriding and made Lowriding too accessible to the average person. In his opinion, Lowrider Magazine had gone corporate, and strayed away from its grassroots. Rigo and the editor of LRM have had conversations to explain the differences and complexities of publishing a magazine. Sharing each others views will help to join forces and move forward together to help protect and support the future of Lowriding and the culture, for the benefit of all. Rigo and the Amigos are an integral part of the history of Lowriding, and their story must be told. In the same manner in which he has been educating the city of San Diego, we hope that through this piece, he will educate the readers of Lowrider Magazine on his history, as well as the history of Lowriding in San Diego.