Newsletter
Sign Up today for our FREE Newsletter and get the latest articles and news delivered right to your inbox.
Home » A Transmission of Information 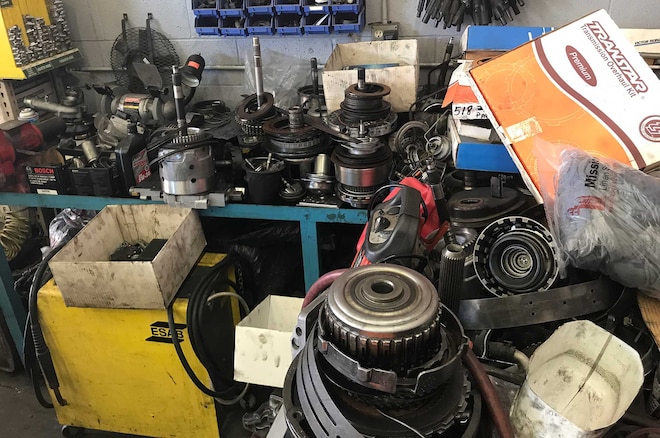 Regardless of whether you drive an import, drag a domestic, or low-ride a classic, the one thing they all have in common is that they’re driven by the transmission. And while the engine may be the heart of the car, it’s your transmission that literally gets you into gear, so in this issue we’ll be going over the basics—and the history—of the engineering marvel that has become know as the automatic transmission.

Now for those who don’t know, the transmission is responsible for transferring power from your engine to your wheels. But that’s just the start, gas engines are known to develop their torque over a very narrow and set speed range, and your transmission is responsible for delivering that power through a series of gears necessary for helping you reach the required speeds.

And while the basic mechanical function of the transmission has remained pretty much the same, there has been much advancement throughout its lifetime. Today, transmissions are available in standard, automatic, semi-automatic, and CVT (Continuously Variable Transmission) but the focus of this story is on the most popular platform: the hydraulic automatic transmission. Since its inception, there has been a list of enhancements giving it a rich history that dates back to the ’30s.

Now when it comes to lowriding, we share a common platform with our brothers and sisters in the hot rod world. We use many of the same motors and transmissions and in this article we will be highlighting some of the most popular platforms in use. From the TH350 to the 700-R4, these transmissions are the result of gathered intelligence from five generations of already great predecessors.

Even more important to mention is the research and development put forth by General Motors Performance. For nearly 50 years, they have been creating performance-oriented engines and transmissions and here today, Chevrolet Performance has developed some incredible transmissions like the 4l65E and the 4L85E. In this Trans Tech feature, we will be highlighting the most popular transmission platforms used in the world of lowriding. As we also paid a visit to Painter Transmissions in Whittier, Ca. where the shop had a few 60’s and 70’s classics up on hoist. This shop rebuilds any transmission for your Lowriders performance needs, including the 4L65E! So get in gear and read on to get a better understanding of the most popular platforms we use.

Historical Timeline of the Automatic Transmission

Alfred Horner Munro, a Canadian steam engineer, invented the first automatic transmission. His transmission used compressed air instead of hydraulic fluid, but it lacked power so it was never sold commercially.

General Motors’ Cadillac and Oldsmobile developed and went into production with the first automatic transmission using hydraulic fluid. This was the first mass-produced transmission for passenger vehicles introduced in 1939 for the 1940 model.

Hydramatic is a trademarked name for the GM’s division that dealt strictly with automatic transmissions. This division produced a variety of transmissions but its most well known unit was the Turbo Hydra-Matic manufactured from the ’60s-’90s.

General Motors introduces the “Hydra-Matic” transmission. While this was not the first automatic transmission it was one of the most important because of how well it performed and in turn paved the way for every automatic shifter that followed.

By February 1942, just under the amount of 200,000 Hydramatic Transmissions had been sold prior to passenger car production being halted because of wartime production.

The Hydramatic was used in a variety of war vehicles, including the M5 Stuart Tank and the M24 Chaffee light truck. Interesting to mention is that the M5 tank used twin Hydramatic transmissions mated to twin Cadillac V-8s.

This marked the year that Oldsmobile became the first to use a true automatic transmission.
Pontiac offered the Hydramatic as an option on their cars and that year 70 percent of vehicles opted for it.

By this year, over one million Hydramatic transmissions had been sold.

Rolls-Royce purchased a license to produce Hydramatic transmissions for their Rolls-Royce and Bentley-branded vehicles. This production stopped in 1957.

This is the year that General Motors replaced the Hydramatic with the Jetaway. Also known as the “Jet,” this transmission was a huge success and gave way to yet another new entry.

The year the Turbo Hydra-Matic was introduced.

This particular transmission was known for its versatility, compact size, and strength and it was found in nearly all rear-wheel-drive GM cars and trucks through 1984. Typically paired with small-block V-6 and V-8 engines, the transmission was ultimately phased out and superceded by GM’s 700-R4 starting in 1982.

The Hydramatic 350 may vary in clutch pack and band specifications. As a general rule, transmissions found behind larger engines will have stronger specs. If your Turbo 350 came from behind a lighter duty motor, don’t worry. These transmissions can be affordably rebuilt with stronger components in nearly every area. Additionally, shift- improver kits are available to provide firmer, quicker shifts, reducing slippage, heat, and clutch wear. There are also many styles of torque converter to better configure the transmission for optimal use in the particular vehicle’s circumstances.

The TH400 is an automatic, three-speed, longitudinally positioned transmission known for its strength. Rated at 450 lb-ft of input torque, this transmission is known to withstand even higher numbers if rebuilt with aftermarket parts. The Turbo 400 was introduced in 1964 in Buick and Cadillac cars and in Chevrolet and Oldsmobile cars the following year.

In fact, the TH400 was so durable and trustworthy that it made its way into heavier duty GM trucks in the ’70s. They were found in both two- and four-wheel-drive configurations, but the popularity and bulletproof reputation also made the transmission a popular option for other manufacturers, such as GM, Jeep, Jaguar, Rolls-Royce, and Ferrari, just to mention a few.

In 1990, the TH400 featured an overdrive version and was introduced as the 4L80-E. Till today, this electronically controlled transmission remains in production and is widely used in heavy-duty GM and military applications.

Considered one of the most durable transmissions, the 700-R4 is an automatic shift, four-speed overdrive, longitudinally positioned transmission. Introduced in 1982, the Turbo 700 was introduced as a response to fuel economy pressures from the general public. The 700 also served as a direct replacement for the TH350. Sporting a 3.06:1 First gear, acceleration off the line was strong and torque was impressive. Though the transmission was introduced with some minor problems, they eventually ironed them all out and the improvements in turn created a transmission that became the perfect counterpart for their performance 350 V-8s found in sports cars and trucks.

Upgrade the components of your transmission and they can easily withstand the power of a modified big-block. In 1990, the 700-R4 was redesignated as the 4L60 (four speeds, longitudinally positioned, 6000 pounds GVW)—a change was mostly in just its namesake. In addition, the transmission features a lockup torque converter helping offer increased fuel savings and cooler transmission operating temperatures. Almost a decade later, they went from a hydraulic logic shifting system over to an electronic unit and this version ended up being called the 4L60-E .

The lessons learned, and the engineering data gathered from five generations of transmissions can be found wrapped up in the 4L60-E (and similar 4L65 and 4L70). Compatible with modern GM engines, this electronically operated transmission sports an aluminum alloy case with a non-integral bellhousing. Perfect for on- and off-road applications, the 4L60-E is an automatic shift, four-speed overdrive, longitudinally positioned transmission. It is now widely considered to be the best rendition of the finest overdrive automatic transmission ever produced.

Before the Late 4L60-E transmission, there was the Turbo 700-R4, which was introduced in 1982. The 4L60-E is GM’s successful continuation of the ever-improving 700-R4, aka “4L60” since 1990. The 4L60-E is the “E”lectronically shift controlled version of the 4L60. The Late 4L60-E is most easily identified and differentiated by its removable bell-housing. It was released in 1996 behind the 4.3L V-6 engine. It was released more broadly against the V-8 engines in 1997 and was phased into full implementation at GM by 1998 in both rear-wheel-drive car platforms and trucks in both two- and four-wheel-drive configurations.

For nearly 50 years, Chevrolet Performance has fueled the passion of automotive enthusiasts. Engine blocks, engines, transmissions, Connect & Cruise systems, and other Chevrolet Performance original equipment parts are built on the same technological innovation as Chevrolet production vehicles. That’s how they guarantee each is built to last. And that’s how they offer performance parts and accessories for every interest, from the Lowrider Boulevard down to the dragstrip.

Transfer your Transmission & Performance needs over to: www.chevrolet.com/performance/overview

If you need your daily, truck, or lowrider trans worked on, visit Painter Transmissions in Whittier, California, (562) 693-3609; Felipe ASE Certified.

Axalta Paint Tip of the Month

Learn how to Paint Professionally

Weather you’re a “Rookie or a Pro” Axalta Coating Systems customers can take single courses as desired or earn a Master Certification from Axalta after successfully completing as few as four courses using their Cromax, Spies Hecker or Standox product materials. Learning and Development programs are also designed to improve customer performance by developing the skills and knowledge to help eliminate waste, reduce costs, and keep cycle time to a minimum. Training classes help increase shop productivity, efficiency, and quality.

Explore Axalta Coating Systems’ Learning and Development programs. These special paint programs are offered in 11 Learning and Development Centers in North America, in an office or shop, virtually, online through axaltalearningcampus.com, or through a mix of blended learning methods as needed per customer. Programs are available for refinishers, body shop technicians, managers, owners, and more. Learn to be a better painter and get started today. Sign up for courses in the Learning Campus.

Sunday, November 24, 2019: The Tejano Super Show is coming to the Ector County Coliseum in Odessa Texas

Truespoke shared with us the six most common ways that a tire shop can ruin your wire wheels and what you can do to prevent them.

Tech & How-To Tired of Rebuilding Your Q-Jet? Holley has a Solution for You

The Q-Jet has a huge list of disadvantages that seems to outweigh its advantages, but now we can all put that behind us thanks to Holley’s Sniper EFI Quadrajet