Newsletter
Sign Up today for our FREE Newsletter and get the latest articles and news delivered right to your inbox.
Home » Questions & Misconceptions About Automatic Transmissions 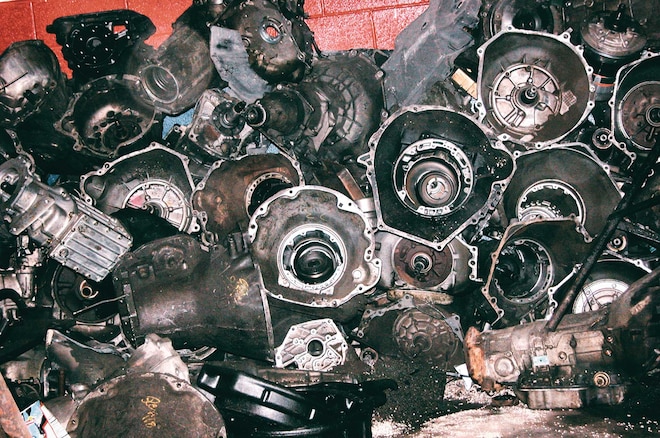 Forget things like nuclear power, lasers, and freeze-dried ice cream. When it comes to back-engineered alien technology, the automatic transmission is a marvel of seemingly otherworldly intelligence. General Motors introduced the first Hydramatic transmission in the 40 Oldsmobile. That was seven years before the Roswell incident, but who knows? Maybe flying saucers had been buzzing around Detroit the previous decade and the one that supposedly crashed in New Mexico simply burned up a couple of clutch bands in its intergalactic slushbox.

Amazingly, the basic design of the modern automatic transmission hasn’t changed much from the early Hydramatics introduced 75 years ago-and they’re still the source of confusion and apprehension among enthusiasts who view their workings and performance nuances as a black art.

Don’t worry. There are no alien probes involved.

They are completely different transmissions. The Turbo 400 is larger, longer, and heavier than the Turbo 350 and was designed to live behind higher-torque applications such as big-blocks. That doesn’t mean the Turbo 350 is weak in comparison. In fact, with all of the enhancements from companies such as TCI Automotive, Performance Automatic, and Hughes Performance, both transmissions can be built to match very high power levels. When it comes to picking one for your vehicle, we’ll always side with lighter and smaller whenever possible. You’ll also want to consider what type came originally equipped in the car. Changing to a Turbo 400 in an original Turbo 350 car will require mounting/crossmember modifications and likely a shorter driveshaft. If you’re worried about the ultimate strength of the transmission, consult one of the transmission specialists for upgrades.

2. WHY IS THE POWERGLIDE TRANSMISSION SO POPULAR IN DRAG RACING?

In the high-tech 21st century, it seems antithetical that racers would rely on an archaic, two-speed automatic gearbox, but there are several good reasons: simplicity, low inertia, and versatility. The simplicity of the Powerglide makes it easier and faster to work on, while contributing to lower weight than three- and four-speed transmissions. Only two gears means less inertia is required to spin it, too, which translates into more power getting to the pavement. As for versatility, there are tons of available First gear ratios that make it easy to tailor the trans to the rest of the engine and drivetrain elements-and a big-torque engine doesn’t need numerically high gear ratios to get the car launched, so the simple Low and High gears are ideal for a quick blast down the strip.

This is one of those questions akin to asking who in your town makes the best pizza. Everybody has an opinion and they’re not necessarily wrong. The 200-4R was introduced in 1981 and its design roots lie in the Turbo 350. In fact, its overall size and length are comparable to the TH350, which makes swapping one comparatively easy into a vehicle originally equipped with the Turbo 350. The rear crossmember has to be relocated, but the original driveshaft can be retained. The 700-R4 debuted in 1982 and was renamed 4L60 in 1990. It offers comparable performance characteristics to the 200-4R, but it’s a longer transmission and a swap into an older vehicle requires a new crossmember and a shorter driveshaft. In the 700-R4/4L60’s favor is economy of scale. They were made in the millions and for much longer than the 200-4R, so used examples are plentiful and cheap. The 200-4R is getting a little harder to find these days.

4. WHAT ABOUT THE 4L60 SERIES OVERDRIVE TRANSMISSIONS? ARE THEY BETTER THAN A 700-R4?

See #3 above. The 4L60 and the 700-R4 are the same transmission. General Motors changed the name in 1990 to 4L60 as part of a new naming convention that continues today. The 4 stands for four-speed, the L stands for longitudinal (i.e., the north/south orientation of the powertrain in a rear-drive vehicle), and 60 stands for the relative torque capacity. Some suggest pre-87 700-R4 transmissions are more problematic than later editions, but that’s not a universal belief. Higher-torque versions of the family include the 4L65E and 4L70E, which have five-pinion gearsets versus the 4L60’s four-pinion design, for enhanced strength.

Just as the 200-4R was an extension of the Turbo 350, the 4L80, which was introduced in 1991, was developed on the Turbo 400 architecture. That means it has a different case design and dimensions and is not simply a high-torque extension of the 4L60-although the families are surprisingly close in overall length and width. And like the Turbo 400, the 4L80 was designed for higher-torque applications. Consequently, it is heavier than the 4L60.

The “E” versions of the 4L60 and 4L80 series transmissions are electronically controlled, meaning a powertrain control module directs solenoids inside the valvebody to activate the valves, compared to the completely mechanical operation of the non-E versions. Using the E versions in an older car requires a complementing controller. The E versions also use an electronic speed sensor to relay information to the speedometer. Signal converters are available to adapt the electronic output for use with conventional mechanical speedometers.

7. WHAT IS THE TRANSMISSION’S VALVEBODY?

It is the nerve center of an automatic transmission. It’s basically a maze of channels and passages that funnel hydraulic fluid to various valves that, in turn, activate the appropriate clutch pack or band servo. Each valve has a specific job, such as activating the upshift from Second gear to Third gear, while another valve controls the downshift from Third to Second. With a computer-controlled transmission such as the 4L60E, electronically activated solenoids are mounted in the valvebody and direct fluid to the clutch packs or bands.

For this month’s Tech Tip, the folks at E3 Spark Plugs want you to make sure that when you are changing out your plugs you use proper tools to install your spark plugs, a 5/8- or 13/16-inch spark plug socket. Also be sure that the socket is sitting correctly on the plug before applying torque. Incorrect tools or crooked tools could crack the spark plug.

Always be sure your hands are clean of grease and grime before handling your new plugs. Grease or dirt on the top of the spark can result in carbon track or flashover. What does this mean? Misfires, rough engine operation, and headaches!

When you’re done replacing your old worn-out plugs with E3 Spark Plugs, inspect all parts of the ignition system for wear or damage (spark plug wires, ignition coil, distributor cap, rotor button). If any of these components are damaged be sure to replace them or they may cause problems for your new plugs.
For any or more info on how E3 Spark Plugs DiamondFire Technology can increase performance and reduce engine emissions for your special ride, log onto www.e3sparkplugs.com.