Newsletter
Sign Up today for our FREE Newsletter and get the latest articles and news delivered right to your inbox.
Home » Jamco’s ’66-’69 Buick Riviera Disc Brake Kit Install – Slow Your Low 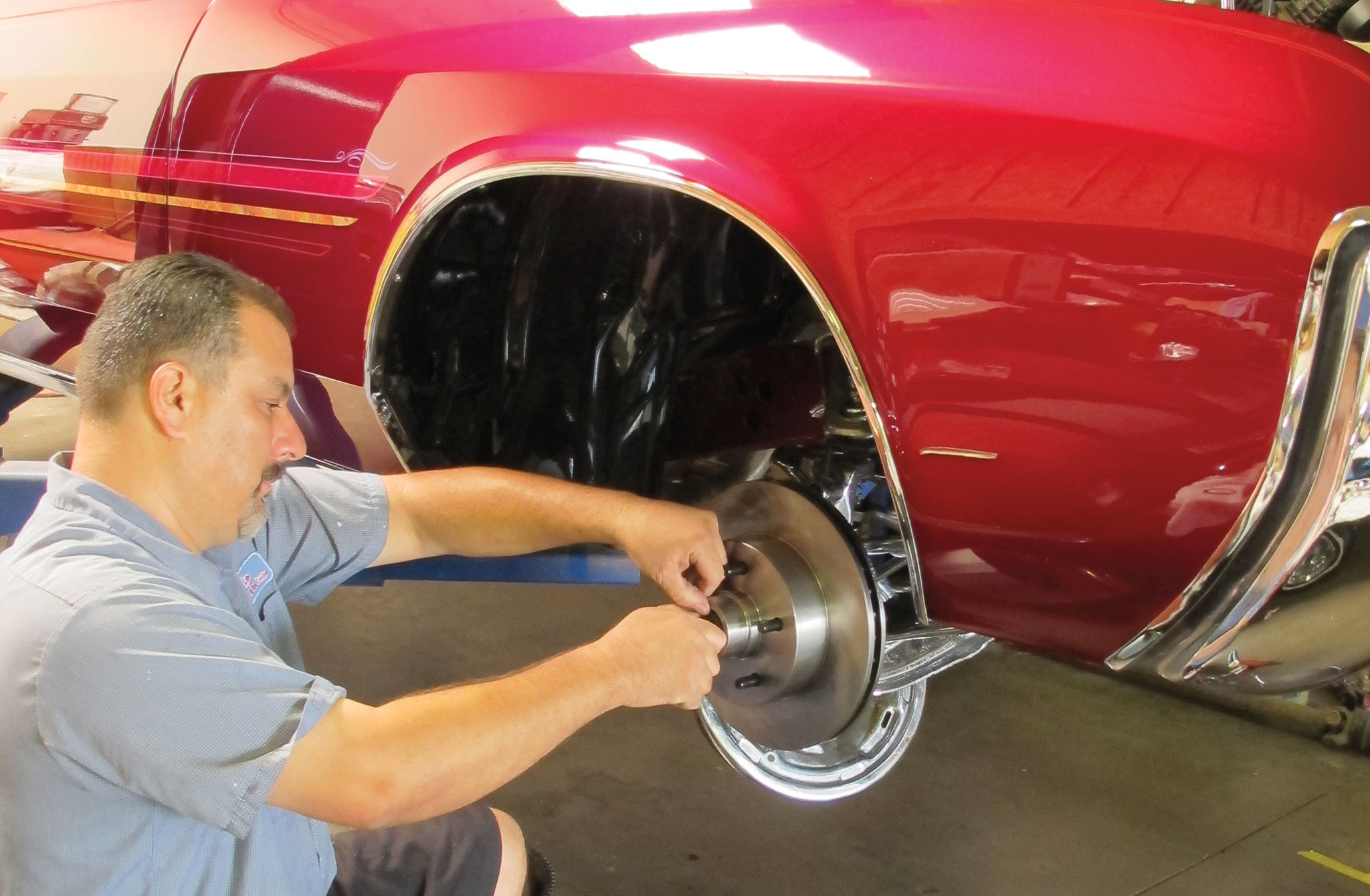 If you’re comfortable with a two-barrel carb feeding your big old V-8, you’re probably fine with the front drum brakes slowing down that even bigger full-size, powered by that under-carbureted V-8.

While power aspect really boils down to preferential reasoning, the braking performance has a fairly important safety aspect, something you know all about if you’ve ever experienced “brake fade” under a panic stop with an all-drum system. There is a cure for that.

Jamco Suspension saw a need for full-size Buicks, specifically the Riviera, and has developed kits for the different models pre-dating the Rivis. Its latest, however, is aimed at the later-models, specifically the ’66-’69 Riviera, which they provided with us to fit up on Joe Rodriguez’s ’69. (Note: minor modifications were performed on the caliper brackets; Jamco will have addressed these with the production kits.)

A typical drum-to-disc swap will consume a day’s labor, which we spent at Joe’s shop — not including the master cylinder/power booster. Since Joe’s Rivi already had a boosted, dual-chamber master, an inline proportioning valve will be plumbed in to compensate for the front discs. (It is recommended to install all components in a “matched” kit, however.) The benefits of having the improved stopping power, as opposed to a bigger carb, is more than worth any R&R time spent with the wheels off.

Unlike other ’60s GM brakes, the Rivieras utilized a good-looking, finned-aluminum drum, thus making them desirable to hot rodders (in other words, don’t discard if you make the swap).

First “r” in R&R: remove the factory drum brake assemblies from the drums to the backing plates, all the way to the framerail flex-line fitting.

With everything removed and the spindles cleaned and checked for any major wear on the bearing surfaces, the machined spacer is pressed on. (It should not fit loose by hand, as the inner wheel bearing rides “against” it).

While other Jamco kits utilize a two-piece caliper bracket configuration, this one mounts directly to the spindle, relying on the snout spacer to align the rotor/caliper. With there being some variance in spindle casting characteristics, we had to slightly modify the bracket to sit flush and clock properly.

Yes, the 11-inch rotors accept not only the stock wheels, but knock-off Daytons, as well. (Double-checking before you go to all the trouble of installing the brackets isn’t a bad idea, though.)

Machine (or hand) press the inner and outer wheel bearings with high-temp disc brake grease before installing the rotors (even if test-fitting) as well as the inner dust seal upon final installation.

With the calipers mounting to the “rear” of the spindles (some of Jamco’s kits install facing the front), make sure the bleeder valves point downward when connecting/clocking the flex lines.

The ’66-’69 kit is supplied with two sets of Allen bolts for mounting the calipers. Verify thread compatibility before installing. Also, before completely torqueing down, spin rotor to ensure there’s no interference anywhere.

With the calipers hung, double-check caliper/rotor alignment, even though the calipers are “floating” and there’s no pressure on the brake pads, if anything’s off, you’ll notice.

The wheel portion of the job wraps up with the connection of the flex line and subsequent brake fluid replacement and system bleeding, since we’re not addressing the master/booster in this case. In either case, the pads/rotors need to be “bedded” (broken in) before normal driving of the vehicle.

As the son of Lowriding legend Big Fern of Lifestyle Car Club, Gilbert Ramirez knew that he couldn’t build just any car, he had to build a car that could hang with the big dogs

If you transformed a stock Cutlass Supreme into a magazine-worthy lowrider, would you be content or would it motivate you to do more?

A subtle C10 with endless style plenty of power.

The latest and greatest for all your suspension needs