Newsletter
Sign Up today for our FREE Newsletter and get the latest articles and news delivered right to your inbox.
Home » Tricked-Out Custom Paint 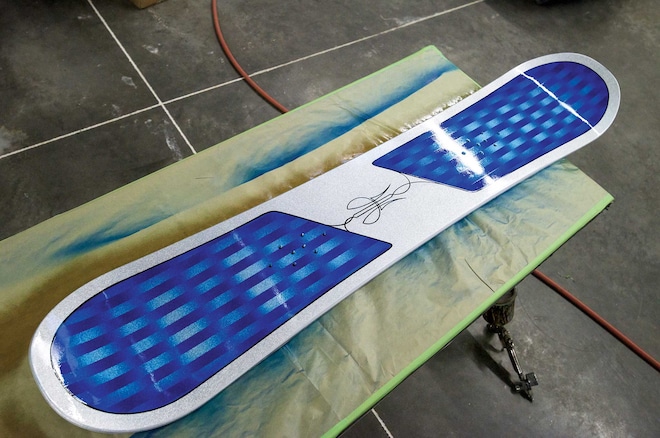 For custom painters, winning the prestigious Ridler award is a career-making honor. For pinstripers the same can be said of the Von Dutch award. So it’s nothing short of phenomenal that Pete “Hot Dog” Finlan has earned both—a feat no other painter has accomplished. “I’m one of the few out there who can do full paintjobs and detailed artwork to that level,” he says. “It’s my artistic vision all the way through.”

His unmatched resume and body of work helped him land a spot on the TV stage as well. Hot Dog was the head painter at West Coast Choppers on television’s Monster Garage. “It was a supercool experience for learning tricks on how to do things under a tight timeline,” he says. All in all, he appeared on 35 episodes over five seasons.

Today, Finlan stars at his own shop (Hot Dog Kustoms), bringing his gifted touch to hot rods, motorcycles, and more. In his new workspace in Temecula, California, you can see he’s devoted to PPG products, especially Vibrance Collection custom paint finishes, and 1 Shot lettering enamels. “I have one paint supplier’s products on the shelf, one complete system to know how to mix,” he says. “And I know PPG is going to stand behind it, which is important when you’re doing a paintjob at a high level.”

With spray gun and ‘striping brush, Hot Dog has created a reputation for bold colors, classic design, and flawless execution. “Luckily enough, I’m at that point in my career a lot of people come to me and say, ‘Hey, I really love the color blue—do your thing,'” he says. “Customers have seen enough of my work to know that if they give me free rein, they’re going to get more than they paid for.”

Hot Dog dubs this technique “Moving Checkers,” a trick he perfected while painting surfboards early in his career. Ideal for filling panels and small projects, the pattern is blurry, yet mesmerizing. Best of all, executing this attention-stealing design is as simple as it is rad.

In this example, Hot Dog uses an electrifying blue over frosty silver, but you can use any color combo, even two cool shades to dampen the effect. “I’ve done it with a white pearl on a white basecoat. The design isn’t even there until the right light hits it. That’s as subtle as it gets,” Hot Dog explains.

While simple to tape and spray, this technique requires a fine touch for fading and spacing, but with a bit of practice you’ll quickly become sure-handed. “Even on a car with one color, you can tell a painter has confidence,” he says. “It just comes out.”

CENTER AND EDGE TAPING
Hot Dog tapes around the edges of the board. He also masks the center, in effect dividing the area into two panels. “Moving Checkers looks better when broken up,” he says.

FIRST TAPING
He places the first stripe down the center and works toward the sides. He uses 3/4-inch tape with a 3/4-inch gap in between stripes. You can choose a different tape width depending on the size of your project.

FIRST BLUE LAYER
Setting his gun for a 1- or 2-inch pattern, Hot Dog sprays a custom mix of Radiance II Blue (green shade) DMX216 and VWM500 Custom Midcoat. The blue lines are spaced to fade gently into each other.

REMOVE TAPE
As you can see, the design is already taking on its trademark trickiness. “Photos don’t do it justice. It’s really cool to look at,” Hot Dog says.

SECOND TAPING
Tape is used to mask off the blue he just sprayed. This leaves white gutters the length of each panel.

SECOND BLUE LAYER
Hot Dog adds more blue across the board. “You spray between the other lines with the same faded edge on it.” It’s the overlapping of these fogged layers that builds the restless effect.

EDGE FOGGING
After removing the tape, Hot Dog fogs the edge of each checkerboard to reinforce the panel’s border. This also directs the viewer’s eye toward the center of the pattern.

CLEAR AND PINSTRIPING
After clearing the board, Hot Dog adds pinstriping around the panels with 1 Shot 199L Lettering Black. He also adds his signature freestyle pinstriping to the silver center area.