Newsletter
Sign Up today for our FREE Newsletter and get the latest articles and news delivered right to your inbox.
Home » Phase I: The Quaker State Six Eight 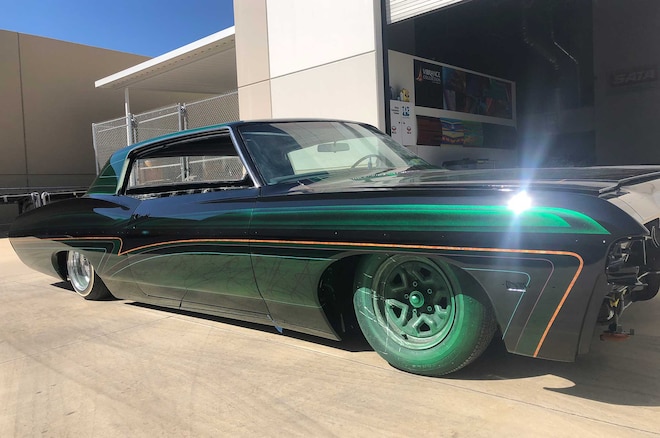 Our long-standing relationship with Quaker State/ Shell is at the heart of some of our most influential programs. As the main supporters behind the Lowrider “Roll Model” series, Quaker State/Shell has stood by our side as we battle the stereotypes commonly associated with the lowriding community. Also, they are the force behind the creation of the “Meat Up” series, and their unwavering support of our lifestyle speaks volumes about their commitment and genuine passion for car culture.

To keep the momentum, we joined forces with them yet again to create a custom 1968 Chevy Impala that will be unveiled at the 2019 SEMA Show in Las Vegas. Till today, the ’68 remains one of the most beloved big-body coupes in the classic Chevy lowrider lineup, and why wouldn’t it be? With its elegantly flowing lines, this formal coupe is a class act that will be getting the full treatment. Of course, the highlight of the vehicle will be a one-off custom paintjob, and in the end, this will be one stylish ride that embodies the artistry of our culture.

The first phase of this project build will be the fun part as we introduce you to the custom paint scheme. To begin, we started off with an Impala with a laser-sharp body and called in the experts over at PPG who gave us full reign on their world-class products. To make it even better, they allowed us to use the PPG Training Center located in Ontario, California. As longtime supporters and advertisers of Lowrider magazine, PPG continues to set the benchmark for world-class paint products and supplies, and we sat down with renowned custom painter Paul Stoll. We expressed to him the desire to incorporate the colors of the Quaker State logo (green and gold) and in turn, connected Paul with Louie Carrillo of Louie’s Custom Kolors-the person responsible for the design and layout of the paint scheme. From there, PPG and Paul Stoll took it to a whole other level by offering their state-of-the-art paint booth facility and products to get the job done right. In fact, Paul teamed up to help Louie and even threw in a bit of his own magic.

PPG provided custom color choices from their Vibrance Collection, and among the products used were their bases, pearls, and candy apple mixtures. From there, both painters took to the gun and utilized their trade secrets to create a killer canvas which we documented. To start, Louie took his designed vision and began by laying down the tape to give him a visual guideline of the dynamic scheme of patterns and layout he was going for. Once the tape was laid, the car was placed in the booth, mask papered up, sprayed down, vice versa and then handed off to pinstriper, Pete “Hot Dog” Finlan, who added the final strokes of genius.

The final steps, buff out, assembly and interior will be covered in upcoming issues, but just know the end product will be one that serves its purpose. From both an automotive and a community perspective, the car itself will become a tool of expression and a vehicle we will campaign to spearhead a new anti-bullying program. In light of that, we are grateful for Quaker State and excited to take this specially built vehicle on the road as we kick off a campaign that helps put a stop to our kids being bullied and the depressions caused by it.