Newsletter
Sign Up today for our FREE Newsletter and get the latest articles and news delivered right to your inbox.
Home » Installing One-Piece Power Windows On A ’56 Chevy Pickup 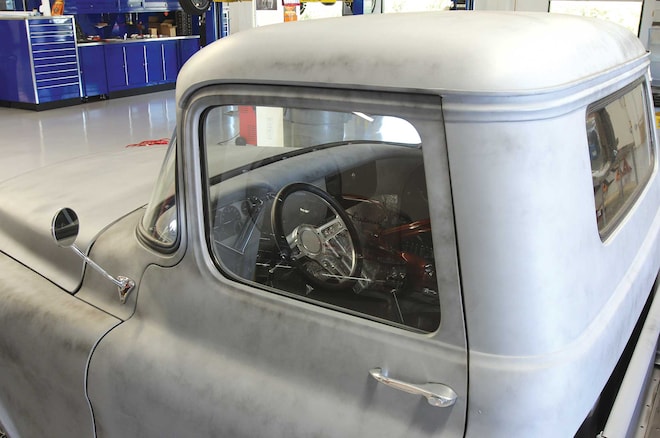 There is no doubt that one of the reasons older trucks are attractive is their simplicity, less is often more when it comes to vehicle design. But even though most vintage haulers are devoid of lots of barbs that catch the eye it doesn’t mean they can’t benefit from the removal of an appendage or two.

One popular modification is the removal of the vent windows—it cleans up the appearance, improves visibility, and as often as not it eliminates the wind noise and water leaks that come from those inherently poor sealing assemblies. Installing one-piece door glass is also a great time to add the convenience of power windows—at least that’s the position Jason Scudellari took, and we agree.

Along with running the TEN Tech Center, Scudellari has been building his personal pickup, a 1956 Chevy. Destined to be a driver, track day and autocross competitor, parts chaser, and all around cool truck, Scudellari turned to Brothers Truck for a one-piece glass kit along with their power window conversion option.

Brothers’ kits come with special cut of glass that allows for complete sealing around the window and easy roll up or down operation. The glass has been cut for easy installation and operation and the entire kit can be installed with common hand tools. The glass is available in clear or tinted (check local and state laws regarding side window tint). There are a several versions of the one-piece window kits available for Chevrolet pickups, 1947 to first series 1955, second series 1955-59, 1960-66, 1967-72 and 1973-87.

In the case of our 1956 some modification to the doors were necessary—a brace at the top of the door was removed as well as the lower stop for the original glass and an access hole was cut into the inside doorskin. One the new power regulator, window runs, and glass were in place, it was simply a matter of getting power to the included switches, which was done with conduit kits that protect the wires going from the body to the doors, also available from Brothers.

Brothers’ one-piece power windows are easy to install, have a clean, modern look while adding the electric operation—that’s some classy glass.

3. After removing the stock glass and regulator Jason Scudellari began installation of the Brothers kit by locating and cutting an access hole according to the included instructions.

5. An abrasive wheel was used to cut between the holes.

6. The finished hole is just large enough to slip the new regulator through.

7. This is the brace at the top of the door that must be removed.

8. An air-powered reciprocating saw was used to remove the brace.

9. The bottom window stop was cut from the inner structure and then split into two pieces.

10. This is severed portion of the stop.

11. Removing the remainder of the stop required drilling the spot-welds, holding it to the inner panel.

12. To allow the windows to track properly in the angled openings the regulators are fitted with rollers that allow the glass to “float” so they can go up and down without binding.

13. The guide is attached to the window regulator with two fasteners—note the slotted hole that allows for adjustments, if necessary.

14. With the guide in place the regulator assembly is slipped into place.

15. The new regulator assembly is secured to the inner doorskin.

16. Included in the kit is a new front guide for the glass—it takes the place of the original that was removed along with the wing window.

18. Weatherstrip adhesive was used to hold the felt in place.

19. Small wood blocks were used to keep the felt in place while the adhesive set overnight.

20. The channel that attaches the glass to the regulator is tapped into place with the included setting tape.

21. It’s a tight fit but the glass is slipped into the door.

22. Once in place, the studs on the glass channel are secured to the regulator with nuts.

23. These are the switches for the window motors; they accept the stock window cranks.

24. The switch is positioned over the original crank’s location and a transfer punch is used to mark new holes for the attachment hardware.

25. To finish off the installation we installed Brothers’ new 1955-59 stock replacement door panels.

Lowrider Garage Gets An E-ticket To Classics & Customs In Anaheim, Ca, AKA Lowrider Land

Lowrider Garage Series episode 19 rolls into the Central Valley region of California and runs into some traffic…Traffic Car Club, that is.