Newsletter
Sign Up today for our FREE Newsletter and get the latest articles and news delivered right to your inbox.
Home » Installing Dakota Digital’s Remote Entry Kit 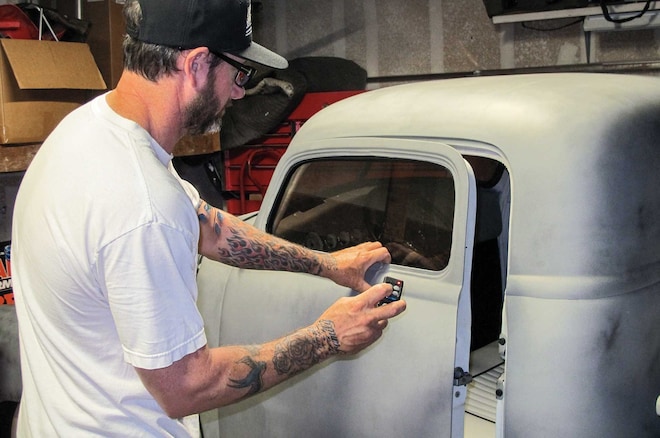 One of the cool customizing tricks that has been around forever is shaving off outside door handles. But while the clean, uncluttered look was cool, the obvious issue was finding some means of opening the door from the outside. Early on, methods to do this ranged from reaching through an unlocked vent window to get at the inside handle and some crude cable release systems. The more sophisticated approach was the use of a starter solenoid activated by a hidden button to trip the door latch, but more often than not these trouble-prone systems were better at keeping the doors locked than opening them. Thankfully, modern electronics have filtered down to the aftermarket and a reliable means of activating electric door latch mechanisms can be the key fob in your pocket.

One of the leaders in custom automotive instrumentation and electronics is Dakota Digital and among their offerings are several variations of remote entry kits that provide for two, four, and 10 functions. Depending on the configuration, they can raise and lower windows, lock and unlock power door locks, and release latches like those on doors, trunks (or tailgates), hoods, and almost anything else you can think of.

A number of years ago Jason Scudellari deleted the outside door handles of his chopped ’49 Chevy pickup, but only recently did he decide to update it with electronic releases. Jason chose Dakota Digital’s CMD 4001X remote entry kit that includes a CMD 4000 four-function control unit, two PDR-2 35-pound pull solenoids, and two XMT-4 four-button remote transmitters. A unique safety feature of the CMD 4000 series controls is that the system is disabled when the ignition is on to avoid accidental door opening during vehicle operation. An emergency release switch can be concealed on the underside of the vehicle should the door ever be closed with the motor running and you on the outside. Pressing this button will allow reentry to the vehicle even though the remote control system is disabled.

Installing Dakota Digital’s entry system isn’t complicated, but it does require planning and attention to detail. The solenoids must be securely mounted and the pull (or push) on the levers that release the original or bear claw latches should be as straight as possible. The receiver should be mounted to allow easy access to the wiring and the electrical source must be able to deliver up to 10 amps for standard door actuators or 30 amps for higher-power solenoids. In addition, the power supply for the actuators should not be used to feed any device that has a high-current requirement such as a power window, power seat, or fan. For those who have more than one vehicle with a CMD-4000 system all of the transmitters can programmed to operated more than one receiver and each receiver can “learn” up to four transmitters.

While simply opening the doors was the goal in this case, the Dakota Digital system is capable of doing much more. As they explain it, each key chain transmitter has four buttons that activate independent channels when pressed. Button one activates the driver’s door latch on channel 1; button two activates the passenger door latch channel 2. In addition, three more channels can be activated by pressing button one and any of the other three buttons at the same time. Button three can activate an external relay to power another solenoid on channel 3; button four can do the same on channel 4.

Installing the Dakota Digital remote entry kit is easy, it provides convenience and security and can be used to operate a variety of remotely controlled functions—and it’s a whole lot better that reaching through the windwing to open a door.

The position of the solenoids is critical, in this case the options were limited due to the window regulator and tracks.

Due to the location of the solenoids Jason had to figure out how to get a straight pull on the door latches. Here he maps out his strategy using a square for a straight edge.

After marking the pattern for the mounting brackets on the door, holes for the attachment hardware were drilled.

To connect the solenoids to the latches, Jason devised a system using cable, crimp sleeves, turnbuckles, and eyebolts.

Since they were in great shape Jason retained the original door latches.

To provide additional mechanical leverage, the release levers on the latches were lengthened.

Cables looped through the release levers and secured with crimp sleeves trip the latches.

Lightweight aluminum turnbuckles connect the cables on the latches and those on the solenoids.

As well as connecting the two sections of cable, the turnbuckles provide a means of adjusting tension on them.

To get a straight pull on the door latch the release cables run through guides made from shortened eyebolts.

Wiring the receiver is a simple plug-and-play operation.

The only wires inside the doors connect to the solenoids. Those wires leading from the body to the doors should be adequately protected to prevent pinching and chaffing.

To eliminate the wires running through the doorjambs entirely and for a clean appearance Dakota Digital offers the Magnum Shooter electrical connectors.

As part of the doors’ updates, new striker plates from LMC Truck were installed.

Connecting the inside handles to the latches are stock-style links from LMC.

The door handle mounts, called relays, come from LMC with the links installed. They bolt in place just like the originals.

A pair of small discs come with the LMC replacement door handles; they go on the outside of the upholstery panels.

The reproduction door handles are held in place with a set screw. Note the protective disc between the handle and the upholstery.

With the new handles from LMC and the upholstery back in place, the doors work normally from the inside—from the outside they open with the push of a button.