Newsletter
Sign Up today for our FREE Newsletter and get the latest articles and news delivered right to your inbox.
Home » Installation Of A Pair Of Remotely Operated Bear Claw Latches 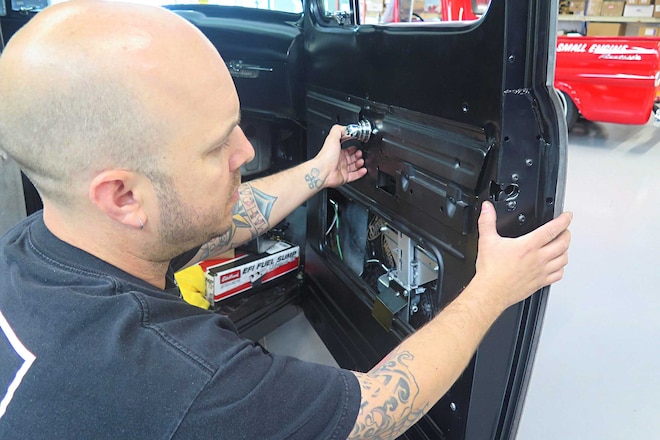 When it comes to building a custom truck, sometimes the modifications made are driven by aesthetics. Other times, they might be driven by function. Either way, they serve a purpose, whether that’s to improve the styling of the truck or to upgrade existing components to better serve the owner’s desires. When it came to replacing the existing door latch mechanisms on our 1952 F-1, we found that we actually had a case where the form and function were to benefit; the exterior door handles on our F-1 were sagging due to play in the handle’s shaft and the stock door latches had seen one too many cycles to have any decent life left. So our problem was twofold. We needed to fix the aesthetics of the sagging door handles and upgrade the door latch mechanism so that the doors shut nicely, without slamming, and to the point where they wouldn’t pop open on the freeway.

Since our truck build leans more toward custom than restoration, we thought it’d make sense to upgrade the latch mechanisms to a more modern bear claw-style latch system, actuated by a pair of door poppers. This would provide a solution to both of our problems as well as cleaning up the doors by removing the exterior handles completely, thanks to a shaved door handle kit from Dakota Digital (PN CMD-10K-1X) and a pair of their dual rotor bear claw latches (PN BCL-2).

But to call the Dakota Digital system simply a shaved door handle kit does not do it justice. In fact, the capabilities of their Commander 10K system extend well beyond simply popping open a couple doors. Functions range from controlling power windows, releasing or raising a hatch (think operating a tailgate, fuel door, or tonneau cover), or toggle or turn on/off any electrical device all from a single six-button remote. Suffice it to say, we’ll be using the Commander 10K kit to not only control the opening of both the doors on our F-1, but we’ll be setting things up to tie into the Specialty Power Window kit that’s yet to be installed.

As our door latch installation progressed, we realized that the only method of opening the doors from the inside of our truck was via the Dakota Digital remote fobs. Normally, this wouldn’t prove to be a problem, unless an emergency scenario arose in which the electrical system was damaged or otherwise unresponsive. Being trapped inside a damaged, burning, or otherwise undesirable truck without a mechanical method of extraction sounded like a bad idea. For that end, we looked at Rocky Hinge’s Inside Door Handle Mounting Kit (PN HL002), which is designed for scenarios just like ours. The HL002 features a mechanical activator that accepts the F-1’s square shaft interior door handle and will be attached to the interior side of the door—in our case in the stock door handle location. Activation of the bear claw latch is accomplished via solid rod or cable. With this solved, we had one more slight hiccup as our original door latches were designed only to be pulled from below via the provided 30-pound solenoids. With the addition of the Inside Door Handle Mounting Kit, we needed a set of latches that could also be pulled from the side. Once again, Rocky Hinge had us covered with their bear claw latch (PN BC001A).

Installing bear claw latches isn’t without challenge as it typically requires a slight amount of fabrication and metalwork. Patching the location of the original latch mechanism on the door and installing the new bear claw latches in addition to building up the B-pillar to accept and locate the door strikers are but a few of the tasks to be accomplished. A bit of welding, grinding, and subsequent bodywork will be required. The kit also requires its share of wiring in order to take advantage of the Commander 10K’s full capabilities.

At the end of the day (or two!) not only had we upgraded the old Ford’s poorly latching doors, but we’d cleaned up the exterior of the truck and added a handful of custom capabilities in the form of controlling the doors via remote as well as the upcoming power windows. After previously having to slam the doors on our truck due to the poor, original latches, gently closing them with a solid latch speaks dramatically for the upgrade in the latches alone. The doors shut smoothly and effortlessly, that door gaps are kept consistent, and, most importantly, the upgrade to a bear claw latch means the doors are latched securely. Form, function, and an upgrade in safety? That’s like an installation perfection trifecta!

Here’s the stock door handle that we’re going to be doing away with. Notice the slight sag that’s typical with the early Ford design.

To get our doors latching securely, we’re going to be using a set of bear claw latches from Rocky Hinge. These have two actuating lever locations, which will allow us to activate the latch using either a solenoid mounted below the latch or a mechanical lever mechanism mounted inline.

External activation of our latches, as well as our power windows, will be handled by a Commander 10K kit courtesy of Dakota Digital. It consists of a control module, two remotes, two 35-pound solenoids, and relays. Two sealed emergency-entry buttons are also included that can be mounted on the exterior of the vehicle.

Activating the bear claw latches from inside the cab will be accomplished using a more traditional, mechanical fashion in the form of Rocky Hinge’s Inside Door Handle Mounting Kit. The lever activator will mount to the interior surface of the door and accepts stock Ford door handles and escutcheons, such as the pictured reproduction items from National Parts Depot.

To get started, we need to remove the stock latch and dovetail from each door.

Our doors had been repaired sometime in the past, so a nice smooth surface was already in place, making installation of the new latch a simpler affair.

After careful observation between the door and the B-pillar, I was able to determine the best location for the latch in the door. Here, I’m marking the centerline location where the bear claws will engage the striker.

Centering the latch with the marks on the doorjamb, the first of four mounting holes are marked on the jamb using a drift.

The first hole is then drilled using an “F” drill, which is slightly oversized for the 1/4-inch fasteners used to mount the latch. This will give us some leeway when it comes time to line up the latch with the striker.

The latch is held in place using a 1/4-inch button head fastener while a second hole is transferred and drilled.

The same process is used for the remaining holes. A larger hole, sized to clear the striker, has been drilled at the marked centerlines.

Using the bear claw latch temporarily installed inside the door, the depth required for the striker is determined and marked on the door. A pocket is then cut so that the striker may pass through that section of the door to engage the latch. Two smaller holes drilled at either corner allows the pocket to be easily cut out using a reciprocating saw, connecting the three holes. This results in a pocket with smooth, rounded corners as opposed to rough, pointed corners.

With the work on the doorjamb complete, the latch is installed and our focus it turned to the B-pillar.

Like the door, the B-pillar requires some metalwork before the striker can be installed. Namely, the recess for the stock striker and dovetail need to be removed.

To do so, a patch panel will be fabricated to create a smooth surface similar to the rest of the B-piller. Here a template is made …

… before being transferred to a piece of 18-gauge sheetmetal.

The fitment looks good, so it’s time to weld the panel in place.

To locate where the striker should be mounted, I inserted a Sharpie pen into the door latch (wouldn’t you know it fit!?) and gently closed the door.

The Sharpie trick worked perfectly and not only told me where to mount the striker vertically, but also how far inboard the striker needed to be mounted to allow the door to close completely.

From there, it was a simple matter of drilling a hole to suit the striker and bolting it in place.

Here, you can see the relationship between the latch and striker just as the door is closed.

Inside the door, it’s a simple matter of mounting the 35-pound door solenoids to actuate the latches remotely. A short length of cable connects the latch to the solenoid.

Since the exterior of the door lacks any type of hand hold, a set of door poppers are used to help push the door open once the solenoids actuate the latch.

To open the doors from inside the truck, a mechanical method is preferred. This will be handled via Rocky Hinge’s Inside Door Handle Mounting Kit.

The actuator is mounted in the same spot as the stock door handle and connects to the bear claw latch using a similar cable setup as the solenoid.

With the door handles gone, the cab of our F-1 looks clean and the doors latch safely and securely, with a nice, even gap around the entire door.

Our cars are a party, but if you can’t get the party started, then what good is it?

Tech & How-To SpoolFool Bumper Filler – Do You Own A Buick Regal?

Owning G-Body will often require that the bumper fillers be replaced at some point in time, and when that time does come, there will only be a few options but only one definite choice, and that go-to brand SpoolFool Productions.