Newsletter
Sign Up today for our FREE Newsletter and get the latest articles and news delivered right to your inbox.
Home » Powermaster Performance One-Wire Alternator – Charge It 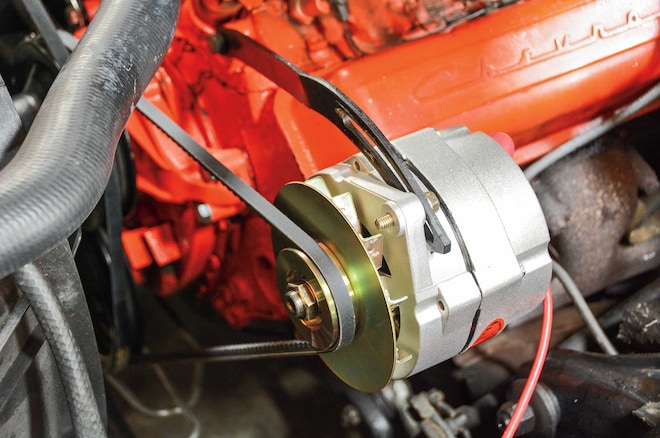 The charging system of your Chevy is a vital piece of the reliability puzzle, and if you’re relying on a crusty original alternator you might be on borrowed time. The fact of the matter is an original alternator from a ’60s Chevy isn’t capable of supporting a car with modern features such as an electric fuel pump, EFI, air conditioning, electric fans, and a stereo system. Not every high-performance project car has all of these modern features, but it’s important to know that an original charging system cannot keep up when all of those accessories are running. That’s where Powermaster Performance comes into play with their lineup of high-output alternators, many of which are available with one-wire hookups.

We’re wrenching on an early Chevy, which is still sporting a mostly original 283ci small-block Chevy engine. It’s a simple car, but we do plan to add a few accessories to the tried-and-true ’60s GM formula. Air conditioning is one of the biggest items on our to-do list, and the folks at Vintage Air suggested we upgrade to a high-output alternator. We went with a Powermaster 12si-style unit, offering 150 amps and a simple one-wire connection. We ordered it with a V-belt pulley and included a new charge wire in our order.

The installation was extremely simple and we had the new alternator in place after about an hour in the shop. Regular hand tools are all that’s necessary for the install, unless you also plan to install a voltage sensor for use with the original battery (generator) warning light or a volt gauge. At that point you might need to crimp a few wires to complete the install, but it’s still a very simple process. For now, we’re taking the easy route and we’ll test functionality with a voltmeter before we take off down the road. The folks at Powermaster say to never test alternator functionality by removing a battery cable while the car is running. Ours checked out fine with the voltmeter so we’re back on the road with confidence that our charging system is up to the task.

As always, any time you’re dealing with the electrical system on your classic Chevy, disconnect the battery. This is also a great time to buy new cables and terminals, as this is cheap insurance against wiring gremlins down the road.

We start by removing the original alternator from our Chevy project car. This car survived more than 50 years with the original charging system, but it’s time for an upgrade. We use a 1/2-inch wrench to loosen the top retaining bolt.

With the top bolt loosened, we can rotate the alternator toward the engine and remove the belt. Once again, we’re using this opportunity to eliminate a potential problem down the road by sticking the belt in our spare parts bin and replacing it with a new one.

Some applications vary, but our Chevy features a 3/8-inch bolt that passes through the bracket and the alternator. We use a 9/16-inch socket and a wrench on the backside to loosen and remove the bolt.

Once the alternator is removed we can disconnect the original wiring, including this brittle plastic plug.

The alternator charge wire is attached to clips that tuck beneath the upper radiator support channel. We snake the new wire into place and feed it into the engine bay.

We removed some of the tape from the factory wiring harness in order to remove the old wires that run to the voltage regulator.

The original voltage regulator is removed. We carefully traced the wires, as this regulator was originally wired into the horn relay, which acted as a power distribution point. Without adding an aftermarket voltage sensor, the battery warning light will no longer be functional after removing the voltage regulator. A volt sensor can be added to the new alternator for volt gauge or warning light functionality.

There are tons of choices for aftermarket alternators, and we went with a Powermaster 12si-style unit, offering 150 amps and a simple one-wire hookup. We ordered it with a V-belt pulley and Powermaster charge wire.

The new Powermaster alternator bolts to the stock mounts with ease. We reused our original long bolt that passes through the bottom bolthole and bracket and then tightened it using a 9/16-inch socket and 9/16-inch wrench on the backside.

A new top bolt is provided with the Powermaster unit. After we got a new belt installed we pulled the alternator tight and then secured the bolt with a 1/2-inch wrench.

We also replaced the ground cable and terminal. It’s important to remember that any vehicle that is running an aftermarket fuel-injection system or LS engine swap needs an excellent system of grounds to tie the engine to the chassis and the chassis to the body.

With the belt installed and everything tight, we can install the charge wire on the back of the Powermaster alternator. The one-wire hookup is very simple, and you’ll be ready to hit the road with additional charging power for accessories like air conditioning, fuel injection, electric fans, and more.