Newsletter
Sign Up today for our FREE Newsletter and get the latest articles and news delivered right to your inbox.
Home » Pioneer Car Audio Upgrade 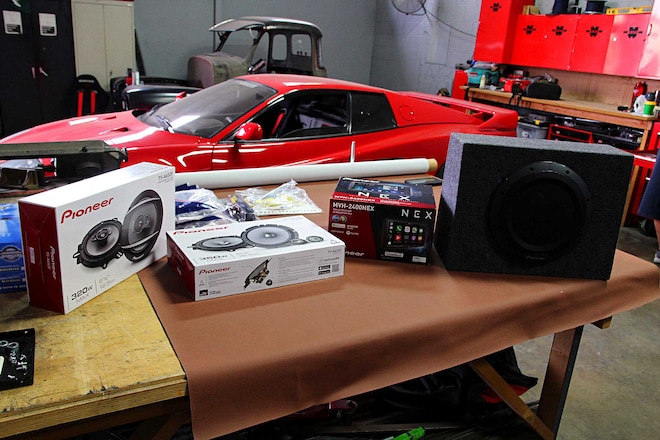 Technology that improves your day-to-day life is a constantly moving target. Many don’t even know what they’re missing until they get it—then they wonder how they ever lived without it. Car audio is an excellent example of this phenomenon. The factory system seems fine until we’re exposed to an aftermarket system with way more bells and whistles. The differences are even starker when that OEM system we once thought was satisfactory is generations old.

Thus was the scenario with our 2007 sedan daily driver. It has been a practical commuter car, competent in its job of getting us to and from the office in relative comfort, but in this age of Apple CarPlay and Android Auto—applications that safely bring the power and convenience of your smartphone to your car stereo—our eighth-generation, non-Si four-door is definitely behind the times. Additionally, unlike a growing majority of modern cars, our get-around ride came without an interactive display in the dash, which is actually a good thing, considering that usually makes in-car entertainment systems far more difficult to upgrade.

Enter electronics giant Pioneer, an iconic presence in the home and car audio industries for decades. Seeing our daily was in need of some modernization, we sourced one of its new MVH-2400NEX Digital Multimedia Video Receivers to replace the factory head unit, which adds smartphone integration, a 7-inch touch-screen, Bluetooth, and much more to our four-door commuter. While we were at it, we also decided to improve the sound coming out of the system by swapping in some new speakers in the doors and rear deck and incorporating tweeters and a subwoofer to fill out the ends of the car’s dynamic range. And to tackle the install, we enlisted seasoned car audio professional Jesse Alvarez from Custom Dimensions in El Monte, California.

Our car features rear factory 6.5-inch speakers that reside in the deck just behind the bench seat. You can see their grilles pretty easily, and this is where a good set of panel poppers comes in handy. You’ll need to get under the speakers, too, in order to disconnect them from the factory harness, meaning you’ll likely need to drop the rear seat back forward as well as keep the trunk open so you can crawl around with ease.

Problem: You need to unscrew a speaker from the rear deck, but there is zero room to fit a conventional screwdriver in between the deck and the raked rear window. Solution: Get yourself a right-angle attachment for your driver.

The material quality difference between the OEM speakers and Pioneer’s coaxials is unquestionable; the TS-A652Fs have stouter magnets, more rigid cone material, an integrated dome tweeter, and so on. We picked up a set of commercially available adapter rings to match the new speakers to the factory holes, then Alvarez connected the adapter harness and wrapped it in Tesa tape (way better than common electrical tape); installation was the reverse of removal. For neatness, the harness was zip-tied in place, too.

Next Alvarez targets the door speakers in front, which mean pulling off the interior panels that are secured via clips and screws—the one main screw tucked behind the lock switch on each door. No biggie; Alvarez pries up the switch panel and disconnects its harness, and the screw is easily accessible. You will also need to disconnect the door lock cable end from its handle to get the panel fully removed.

For these TS-A652C midranges, we also picked up adapter harnesses and rings, helping everything button up nice and clean.

Our daily driver also had provisions for tweeters—holes and grilles, specifically—but no actual tweeters, nor the factory harnesses for them. This meant having to tap into the speaker wires in the door harnesses for signal.

We were adding all this new functionality to our audio system, so we figured we might as well throw in a backup camera too, since we now had something to view it on. Via recommendation, we went with a vertically adjustable cam made by Cosmic Optix that is secured by the upper two mounting fasteners for your rear license plate. Wiring it, however, meant routing a cable through the trunklid—accomplished by popping off the trim piece over the plate (no easy task; those clips put up a fight) and creating a tiny cutout for the line to pass through in one of the license plate light holes.

In addition to running the video out cable through the trunklid, we also had to have the camera’s on/off wire soldered to one of the reverse lights, so that every time the car was put in Reverse the cam would come on. Once Alvarez made the connections and tucked everything out of sight, he was able to fasten the camera and reinstall the trim piece.

This all-in-one unit—subwoofer, amplifier, and enclosure—was probably the easiest part of the installation; it’s about as plug-and-play as they come. Alvarez attached a couple of hook and loop (aka Velcro) strips to the underside of the box, then threw it in the trunk; the strips provide enough resistance against the trunk’s felt lining to prevent the enclosure from sliding around.

The last major piece to go in is the MVH-2400NEX source unit, a so-called double-DIN receiver that is equipped with a 7-inch touch-screen display. In order to install it, though, Alvarez had to remove the factory stereo, and that meant removing some of the bigger trim pieces from the dash, including the panel around the gauge cluster and driver side vent, as well as its corresponding panel underdash. The factory head unit is pulled out just enough to dislodge the harness connectors, then when free it’s pulled out the remainder of the way.

Unboxed, Alvarez prepped the MVH-2400NEX by soldering its harness to the adapter harness.

Once the harness was plugged into the back of the MVH-2400EX, he installed the unit into the dash kit. The kit reuses the vehicle’s factory climate control dials/knobs.

Everything goes back together in the reverse order that it was removed—but before that happened Alvarez mounted the MVH-2400NEX’s hands-free mic to the forward edge of the headliner. The fit and finish on the dash kit was damn near OEM, but even better, we now had a powerful source unit to replace the weak stock unit that was there before.

We want to make a few final points about wiring and keeping everything tidy in an install like this, something that pros stress vigorously. For example, we had to have power for the sub and a video cable for the backup camera extend the length of the car, so that meant tucking wires under carpet and interior panels throughout the driver side of the cabin. Where wires are exposed, Alvarez either wrapped them in Tesa tape and tucked them out of sight or, as in the engine bay, he covered them in plastic loom. In the trunk, wires leading to the rearview camera were zip-tied next to the factory harness that traveled along the trunklid hinge, blending together to the naked eye. Clean metal-to-metal grounds, soldered and heat-shrunk connectors, and rubber grommets where wires pass through/over metal are a must if you hope to protect your electrical from premature degradation.