Newsletter
Sign Up today for our FREE Newsletter and get the latest articles and news delivered right to your inbox.
Home » Phase II – The Quaker State Six Eight Impala 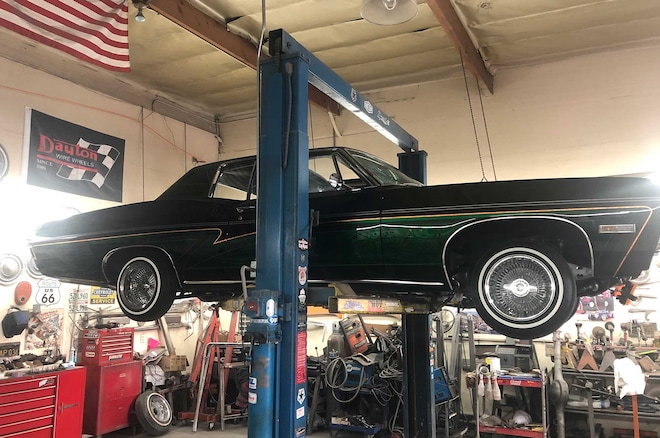 Our long-standing relationship with Quaker State/ Shell is at the heart of some of our most influential programs. As the main supporters behind our Lowrider “Roll Model” and the “Meat Up” series, Quaker State/ Shell has stood by our side with their unwavering support of our lifestyle and that speaks volumes about their commitment and genuine passion for our car culture. We joined forces with them yet again to create a custom 1968 Chevy Impala that was unveiled at the 2019 SEMA Show in Las Vegas. From both an automotive and a community perspective, the car itself will become a tool of expression and a vehicle we will campaign to spearhead a new anti-bullying program. In light of that, we are grateful for Quaker State and excited to take this specially built vehicle on the road as we kick off a campaign that helps put a stop to our kids being bullied and the depressions caused by it.

In our last installment of the build, we took you through the first phase of our custom project build where PPG’s Vibrance Collection of custom colors and Paul Stoll along with Louie Carrillo Custom Creations were able to tag team this beautifully designed paint scheme and then hand it off to pinstriper Pete “Hot Dog” Finlan who added the final strokes of genius. Now we begin with the second phase features of our custom charity build as we plug in the mad buffer himself, Lux Detail.

Lux has to remove the material buildup known as orange peel to bring out that glass finish look and he prepares that with sand paper grits from 800 all the way up to 2500 before he uses his magic quality Lux products such as compounds, waxes, sealers and wool and foam pads. Only Lux Detail can bring out the best of any paintjob, and the proof is in the buffing. From here, it was time to assemble this luxury big body Impala, so we hired the Melendez Brothers for their experience, craftmanship and passion to put together this classy masterpiece.

The “Sin Shop,” as they are called, put back together the entire Chevrolet Impalas chrome moldings, bumpers, emblems, glass and weatherstripping. Finesse and patience are a skill, and at the end, it was a careful job well done and on time as promised.

While the wrenches and screwdrivers were being turned and the final polishing was being administered, Frank Cortez and his one-stop shop 5one4 Inc. took on the job of remodifying the looks on the Impala Customs Interior design by sewing up a modern luxury/sport design all in black leather. Less is always more, especially when craftsmanship and modern-designed concepts are brought to reality as seen here. Though Frank and Andy do it all creating customs or classic automobiles at 5one4 shop, they came through in the clutch when we needed quality and had a deadline to meet. From there, it was time to head on up the road to El Monte, California, where Jesse Alavarez of Custom Dimensions added his personal touch to the build.

Jesse specializes in all automotive electrical departments, but aside from stereo installs, fiberglassing designed interior concepts, and pop doors, Jesse takes pride in his work as he not only loves challenges from other competition builds, but he likes to stay ahead of the game by staying alert to the latest technologies and demonstrating them along with his eccentric design and visions. Finally, and down to the wire and wired down for display at this year’s SEMA Show, the Quaker State Six Eight was unveiled at the Shell Pioneer Booth.

We at Lowrider and Quaker State/Shell Oil Products are very proud to present the QS ’68 Impala Custom. From the looks of the huge crowd reception outdoors at the SEMA pavilion, when the cover was pulled off, everyone was impressed and aware of our new mission on this special charity custom build. Look for the Lowrider QS ’68 to be featured on the Cover of an upcoming Lowrider magazine issue and to a venue near you as we hit the road tour of Lowrider Car Shows, Meat Ups and even a Nascar event.