Newsletter
Sign Up today for our FREE Newsletter and get the latest articles and news delivered right to your inbox.
Home » DIY Upholstery: Topstitched Pleats 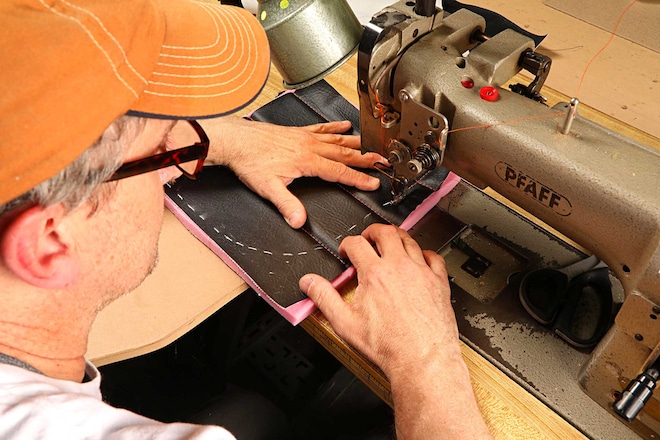 There’s something magical about pleats. Whether parallel or in diamonds, they transform what would otherwise be a slab of plain material into an interesting pattern. They’re also timeless; whether rendered in vinyl in a trad hot rod or in leather in a contemporary street rod, pleats have been and will always be in style.

But probably best of all, pleats, specifically topstitched, are almost insultingly easy to create. If you can sew a straight line then you’re like two-thirds of the way to sewing topstitched pleats. The last third is a little bit of gluing and an extra measuring step.

Our pal and upholstery instructor Jerry Glasgow will show us the ropes. The job requires three extra products beyond the material and thread: a sharpened stick of chalk (which you should have for other tasks anyway), spray adhesive, and scrim-backed foam (often referred to as pink sew foam). Just glue the material to the foam-side of the sew foam and stitch along the lines drawn in the chalk to create the pleats. Stitching binds the topping to the scrim backing on the backside of the foam, creating a quilted appearance.

Pleating does present one small issue, though: the material loses a little bit of area as it falls to make each stitched line. Two principle factors influence the amount of shrinkage: the topping material and the thickness and density of the sew foam. Speaking of thickness, the two most popular dimensions of sew foam are 1/4 and 1/2 inch. The thickness determines the pleats’ depth, with 1/2 inch being the go-to thickness for most jobs (1/4-inch renders flatter pleats, which have their place but are less common). But it’s easy to determine the area lost to each pleat (that’s the measuring step hinted at earlier). We just have to practice on some scraps.

For parallel pleats the material loses area in one dimension (width-wise if you’re stitching vertical pleats). But with a diamond pattern the material loses area in two dimensions. It’s super easy to calculate but it’s one of those things that’s absolutely necessary to avoid having a pleat line conflict with an edge (which admittedly isn’t so critical with diamonds). There’s one final step to prepare the edges but it’s a super-simple one.

Naturally, the rabbit hole of upholstery designs, tips, and tricks is bottomless. Headliner aside, it’s entirely possible to trim a whole interior with the information presented here.

Really what we’ve done is stripped away any reasons why you can’t do your own trim work. So now it’s on you. Show us some of the work you’ve done.

Preparation is key for any job and layout is the first procedure. And there’s probably no better marking material than plain ol’ chalk. Jerry Glasgow snips the sides of his chalk to create a sharp wedge.

He then scribed a series of parallel lines on a piece of scrap material. The distance between each one is somewhat irrelevant as we’re actually measuring the amount that the material “shrinks” with each pleat.

Glasgow sprayed the open (non-scrim) side of the foam and the backside of the material with adhesive, let the adhesive tack, and then stuck the two panels together.

He scribed the lines exactly 3 inches apart, the width of each pleat. The critical thing here is to know the starting distance between each line.

Sew along each scribed line. For greatest consistency, sew to the edges of the topping material.

Here’s the panel as viewed from the top. Note how much each pleat “lofts” as a result of the foam.

And here’s the panel as viewed from the bottom. Note the scrim backing. That gives the stitched lines the structure they need to adequately compress the foam.

Two stitches shrunk each pleat by about 1/8 inch, leaving each pleat exactly 2-7/8 inches long. That may not seem like much but it shrinks the material an inch for every eight pleats (24 inches in this case). That’s essential to know so the end stitches don’t come awkwardly close to the panel edges.

Sewing an edge with a separate piece of foam flapping around isn’t exactly fun. So Glasgow sews the topping to the foam along each edge. He begins by plotting a line in the shape of the insert. Bear in mind that this line accounts for his seam allowance.

Cutting just outside the sewn perimeter makes the panel basically the same as if it was just a flat piece of material. Again, this panel is slightly oversized to accommodate the seam allowance.

Glasgow sewed another piece to the pleated insert in a flat-fell seam to make a boxed shape.

The foamed panel makes for a thick edge, which can print through the boxing panel. So it’s pretty much mandatory to trim the edge back as much as possible—leave just shy of about 1/8 inch for integrity.

And here it is, a completed pleated panel sewn to a boxing panel. This is the foundation for so many creative jobs—choose your own pleat width or even plot out some diamonds for a sportier look.