Newsletter
Sign Up today for our FREE Newsletter and get the latest articles and news delivered right to your inbox.
Home » DIY Upholstery: How To Set Thread Tension And … Sew 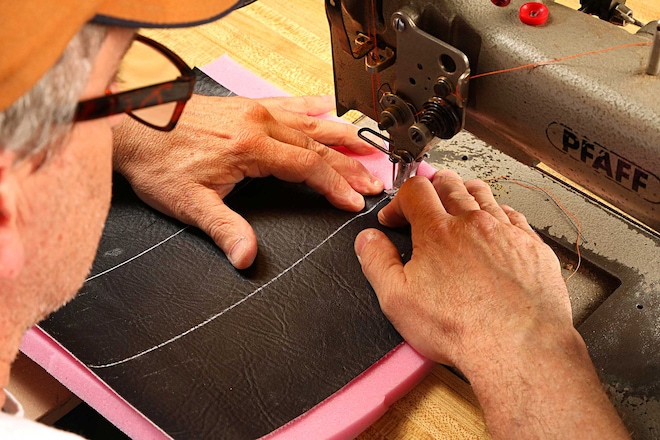 After practicing what trimmer Jerry Glasgow at McFarland Custom Upholstery reveals here, you will honestly be able to say you can sew together at least two panels.

We’ll cover a few very critical (but simple) things. First, we’ll learn how to set thread tension to execute a strong, reliable seam. As part of explaining seam allowance means, we’ll show you how to stitch together two panels. Then we’ll learn how to measure how panels “shrink” when sewn together.

Then we’ll show how to make a simple seam a whole lot stronger and better looking. We’ll finish up with how to stitch outside and inside curves, two of the building blocks in the trimming world (the straight seam is the third).

Taken a little bit at a time, you too may one day brag that you did it all, even the upholstery.

How to Set Thread Tension

If you were to X-ray a stitch, you’d discover that it’s basically a series of interlocking loops not very different from the wires in a chain-link fence. The needle moving up and down is but one half of this loop-making process.

Now, if the needle and bobbin thread tension match, the two threads will intersect within the material. But if the thread tensions don’t balance, the tighter thread will pull the looser one to its side. And a poor-quality stitch will follow. Fortunately there are only two adjustments.

Because few materials behave exactly the same, set the thread tension each time you change materials. It takes just a few stitches in a couple remnants. This is how to do it.

Here’s how a perfectly executed seam looks from the topside. If you look into the stitch hole you can see just bit of the bottom thread. But it tells only half the story.

The other half is how the stitch looks from the bottom. Just as with the top, you can see just a little bit of the topside thread in each stitch hole. Each side matches the other.

There’s another tension setting on the bobbin case. This rarely needs adjustment; once it’s in the ballpark, you can make all of your adjustments from the upper thread tensioner. But if you can’t get your stitch quality right with the upper tensioner, you’ll have to dip into this one.

Here’s how the underside of that stitch looks. Note that none of the orange thread from the topside shows in the stitch holes. Fix this by relaxing the top thread’s tension. If that doesn’t work, tighten the bobbin thread tension.

And here’s how the underside of that stitch looks. Fix this by tightening the top thread’s tension. If that doesn’t work, loosen the bobbin thread tension.

Sewn panels don’t join edge-to-edge. They actually join a given distance away from an edge. We call this distance the seam allowance. It’s a personal preference thing but most trimmers sew within about 1/4 inch from the edge. In other words, they use a 1/4-inch seam allowance.

Now you’d think that a 1/4-inch seam allowance eats up 1/4-inch of your panel area. But it doesn’t; it takes just a little more based on a number of variables, most notably the material thickness and its pliability. It’s called shrinkage in the industry.

Determine just how much area each material loses to shrinkage. As with the thread-tension setting, it’s easy to do with remnants.

Measure a remnant’s width. Glasgow used 12 inches because he had a remnant about that size and it’s easy to measure.

He set that piece right-side up and placed another remnant (dimensions unimportant) right-side down with their edges aligned. Then he sewed about 1/4 inch from the edge. That 1/4 inch is his seam allowance.

Glasgow joined another panel right-side up to the opposite end of the main panel. Again, dimension isn’t important; only the seam-allowance distance is.

A simple stitch will join two panels but the joint won’t hold together very well. Tension on the seam will cause it to unravel, especially at the edges. The solution is a second seam adjacent to the first.

The common practice produces a variation of a felled seam. That thick, wide seam down the legs of your jeans is a true flat-felled seam. But a semi-flat-felled seam dispenses with one of the folding processes. Basically fold over the sewing allowances to one side and topstitch through all three layers.

A simple stitch joins multiple panels but it doesn’t make a very strong joint. They’re prone to pull apart, especially at the edges.

Start by folding the edges of both panels over to one side. Then sew through them. Given that he used a 1/4-inch seam allowance, Glasgow sewed about 1/8 inch away from the first seam. Just ensure that the seam grabs the tails of both panels.

This felled-seam variant produces a crisper edge. The second stitch makes the seam look more interesting, even when the thread matches the material.

And here’s how the seam looks when viewed headlong. The original stitch is to the right where the left panel rolls over. The second stitch is to its immediate left. Note how it captures the tails of both seam allowances.

Here’s another way to lock in the vulnerable end of a seam: at the beginning and/or end of each stitch, reverse the machine (by hand if your machine doesn’t reverse) and go over the last 1/2 inch or so before proceeding (or finishing).

Make a cover with any sort of shape and you’ll have to sew curved panels. But don’t fret; they’re just about as easy as sewing straight lines. In fact they require the same procedure: Lay the material’s right sides together and sew along the edge. The only noteworthy difference is that you’ll need to constantly maintain panel orientation, which isn’t hard.

Start by cutting a piece with an outside curve in it. Cut a second piece straight. This straight piece is usually something like a seat side panel, often referred to as a boxing panel.

As you did with the straight panel, place the panel’s right sides together. As you enter the curve you’ll have to constantly adjust the panels so their edges meet. It’s a little tricky when the top material puckers as you sew. But pay no mind to it; concentrate on the edge.

Once joined, the boxing piece will sort of loft up. This is totally normal since you’re asking it to bend to conform to the top panel’s curve.

The single stitch effectively joins the panels, but as noted earlier it’s neither strong nor handsome.

Here’s that assembly right-side up and drawn over a scrap board. Note the stitch detail on the boxing panel. This is the foundation for a seat corner.

Sewing inside corners is a little trickier if only because the boxing panel puckers. But once the edges are top-stitched to the boxing panel and the panel is inverted, they’re not likely to cause any issues.

Once again, the inside-corner felled seam drawn over a board shows a sharp, detailed edge.