Newsletter
Sign Up today for our FREE Newsletter and get the latest articles and news delivered right to your inbox.
Home » Dakota Digital VHX-63C-CAD – This Caddy Got Gauged Up 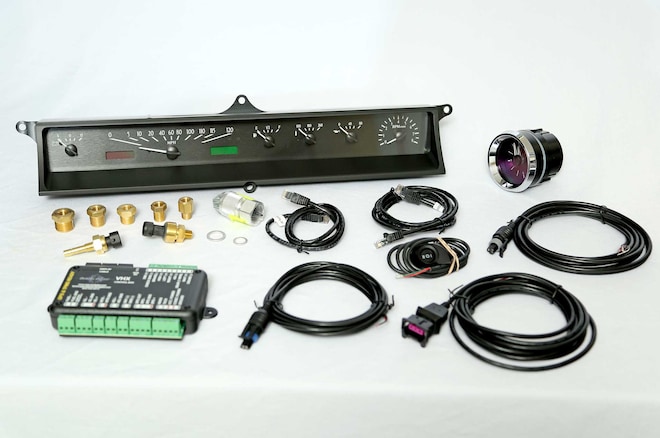 In the car world, mention the year ’64 and the first thing that comes to mind is the Impala. It’s been like that for decades and I’m sure it will continue, but nowadays, there’s another ’64 that’s being mentioned more and more and it comes from Cadillac—and in specific those from the DeVille and El Dorado lineup. Their increasing popularity is reflected by the recent price surges and it’s with good reason. The car is a looker with solid lines, and as the car becomes more and more difficult to find, the price grows exponentially each year.

That said, we’ve got one of our own in the family stable and the one thing we can assure you is that sooner or later the instrument gauges will fail. Now if you’re lucky, you may get early warning signs, but in our case, the entire gauge cluster went flat out, so there was no better way to repair them than by replacing them. Yup, you read that right. In the case of gauges, we’ve found it’s better in the long run to replace and not repair gauges. Repairing gauges is costly, and chances are something sooner than later will go wrong once again. But what else would you have expected from 55-year-old technology and manufacturing standards?

To get this boat back on the road, we opted for a Dakota Digital package which was designed to drop right in. In specific, we used the VHX-63C-CAD which is a direct-fit instrument system. The package includes six analog instruments plus a pair of LCD message centers. Users can opt to keep the original chrome housings but upgrade to modern instrumentation suitable for any drivetrain, from the stock 390 to a turbo LS3, integration is no problem. Choose from black or silver face styling and blue, red or white LED backlighting to complement your Series 60S, 62 or 75.

Fully lit needles, backlit faces, and highly visible LCD message centers are a few of the things that you can see which set the VHX Series apart from yesterday’s traditional approach to instrumentation. A few of the features which you don’t normally see are the micro-controlled precision stepper motors, solid state sensors for unparalleled accuracy, and user-customizable display feedback, all supported by an unrivaled limited lifetime warranty which has become the standard for Dakota Digital instrumentation systems. Completely engineered and manufactured at our facility in Sioux Falls, South Dakota, the VHX Series has completely revolutionized the instrumentation industry!

So just remember, Dakota Digital has instrumentation for your Impala, but they also have your Cadillac covered as well as many other cars. For a complete listing of the products they offer, head on over to their site and get to know why Dakota Digital remains a leader in automotive instrumentation.