Newsletter
Sign Up today for our FREE Newsletter and get the latest articles and news delivered right to your inbox.
Home » The Chevrolet LT1 Small-Block Triplets – How To Tell Them Apart 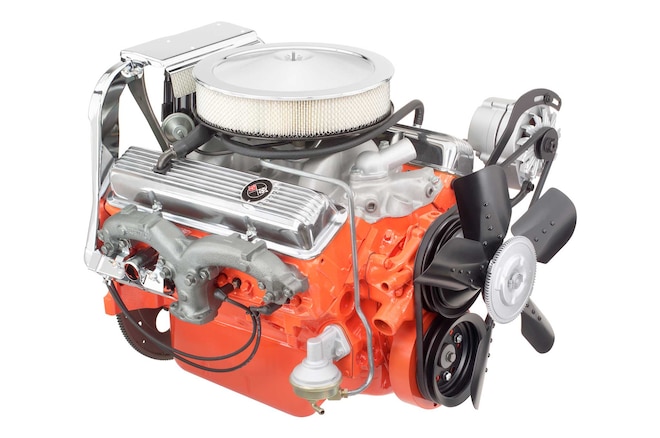 The first LT-1 (with a hyphen) engine was introduced in the Corvette in 1970 as an option. It was a raucous, racing-inspired engine with solid valve lifters, a high-lift camshaft, and high-winding personality that redefined small-block performance. Displacing 350 ci (5.7-liter) with a compression ratio of 11:1, it was rated at 370 hp at 6,000 rpm and 380 lb-ft of torque at 4,000 rpm. It was enough to push the Corvette from 0-to-60 mph in less than 6 seconds.

Indeed, the LT-1 was a true high-performance powerhouse, featuring many heavy-duty components not found on the Corvette’s standard 350 engine, including a stronger cylinder block with four-bolt main caps, forged aluminum pistons, a high-rise aluminum intake manifold, a baffled oil pan for reduced windage, a transistorized ignition system, and high-volume oil and fuel pumps.

Only 1,287 Corvettes left the factory in 1970 with the LT-1 engine. It remained in production for another couple of years, but lower compression ratios and other regulations-conforming changes resulted in lower horsepower.

The LT1 (no hyphen) returned to the Corvette in 1992, launching the five-year lifespan of the Gen 2 small-block. It built on the successful design of the L98-code Gen I small-block that debuted in 1985, featuring the port fuel injection design that most automotive engines still use today. Like the original LT-1, the Gen 2 version displaced 350 ci and featured a four-bolt main block.

The Gen 2 LT1’s most significant update over the Gen I small-block was a reverse-flow cooling system, which cooled the cylinder heads first to achieve lower cylinder temperatures. That allowed a higher, 10.4:1 compression ratio that helped achieve greater power: 300 hp at 5,000 rpm and 330 lb-ft of torque at 4,000 rpm. It helped the Corvette achieve 0-to-60 acceleration comparable to the 1970 model, while also helping propel the 1992 model to a top speed of more than 160 mph.

After an 18-year hiatus, the LT1 returned to the Corvette for 2014, matching an all-new car with an all-new Gen 5 engine-one of the most technically advanced engines in the world and the most significant redesign of the small-block ever. It will have the highest base horsepower and torque, as well as the greatest efficiency of any Corvette in its 60-year history.

This is the 1970 Chevrolet 350ci LT-1 as it was offered in Corvettes. It featured an aggressive solid-lifter cam and a single four-barrel carburetor.

The LT1 introduced in 1992 was unique for a number of reasons, not the least of which was the reverse-flow cooling system and direct drive water pump.

The all-aluminum 2014 LT1 had the largest displacement of the trio and was the first to feature direct fuel injection.

Reliability, increased performance, improved efficiency, there’s really no reason to make the jump from carburetion to injection in this day and age.

Giving our Bomb truck project modern-day performance values and reliability with some performance bolt-ons from Holley.

Joe Romero is holding a royal flush of lowriders as he owns every convertible Impala from ’58-’63, with his ’61 labeled as his Ace of Spades, as it was the final piece to his collection.