Newsletter
Sign Up today for our FREE Newsletter and get the latest articles and news delivered right to your inbox.
Home » LS Power in Your Chevy Classic 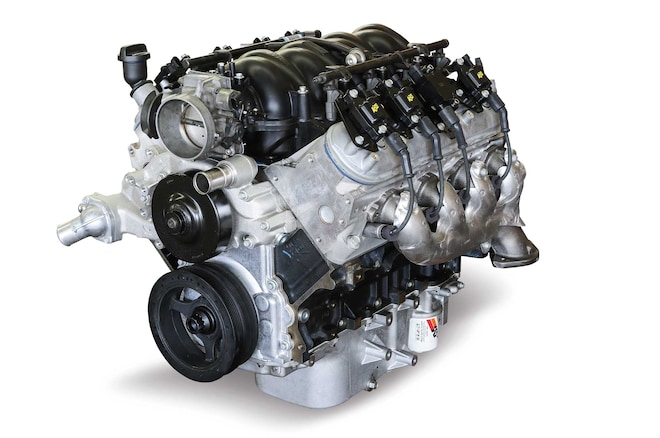 The biggest complaint about LS-type engines is they cost a lot of coin to get into. Yeah, the typical LS mill will bleed more cash from your wallet compared to a traditional small-block, but if you’re careful and don’t need a bazillion horsepower, then it can be more of a flesh wound instead of a gushing flow of Benjamins. You see, not every LS build has to be a dry-sump LS7 or 600-plus horsepower stroked LS3. There are many LS variants out there and some of them are downright affordable. Shop smart and set realistic expectations and you can have modern LS EFI goodness under your hood for not much more than a quality Gen I small-block.

The term to keep in mind is “economy of scale.” That’s to say, you need to think about what is plentiful in the marketplace. If it’s easy to find (large supply) then the prices will typically be less. So, with that bit of Econ 101, the most affordable LS variants on the planet would be the 5.3L and 4.8L examples. Hundreds of thousands of these have been produced and are now easy to find parted out online and languishing in salvage yards.

We decided to try a 5.3L since it’s by far the most common engine out there. Rather than buy a complete engine we opted to build one from various sources. Why? Well, when you buy a pullout engine you typically end up with a lot of leftover bits and a complete engine tends to cost more than if you buy the components separately. We were going to go this direction with the block, but Summit Racing had 5.3L blocks so inexpensive it wasn’t worth the effort to hunt one down in a salvage yard. The rest is a combination of new and used parts to end up with a done and ready-to-run engine. Now, if your wallet is a bit light, you can do things even cheaper than we did by going with used parts. But keep in mind that running used lifters or a “broken-in” oil pump does up the risk factor a bit.

As for our goal, it was simple. To make at least 400 hp on the cheapest 87-octane fuel California has to offer. We wanted a ton of vacuum at idle along with smooth performance.

Millions of LS engines have been produced, which means that parts are easy to find and pretty easy on the wallet. The “economy of scale” also helps lower the cost of new LS parts like this 5.3L GM block from Summit Racing. It priced out right around $300, which makes it one of the best deals around.

The Summit 5.3L block came ready to rock and already honed to the required 3.780 inches. After looking over the block we found that no machinework was needed. The block came bare (but with cam bearings installed) so we picked up an engine plug kit, with the needed oil restrictor plug, from Summit (PN SUM-G1584).

5.3L LS engines are one of the most common ones on the planet and were stuffed into scores of SUVs and trucks. They’ve also been around long enough so there are rotating guts available for cheap at swap meets and online.

We scored a 5.3L rotating assembly from a friend but found that the crank must have tossed a bearing, resulting in a beat-up crank journal and two bad rods. To fix the crank, Rancho Machine, in Rancho Cucamonga, CA, was able to turn the crank 0.010 inch. But that still left us two rods short of a full set.

Overall, these parts, whether new or used, are pretty cheap so we weren’t too concerned about finding two replacement rod/piston combos.

If you’re just building a cruiser and don’t need big power, the heads for your LS engine can be pretty budget friendly. We scored a pair of used early LS1 (1999-2000) 853 heads (GM PN 12559853) for under $300, which is about the going rate. They’re nearly identical to the later 241 LS heads and have 66.67cc combustion chambers and 200cc intake runners. Now, these will drop the compression ratio of our 5.3L since the combustion chambers are larger than what a 5.3L typically fields. If you want max power, these should be milled down a bit. But, we want a cruiser that will be happy on the cheapest gas we can find, so we left them as is.

With our freshly machined and polished crank back from the machine shop we were ready to start putting it all together. First up, install the crank using a fresh set of Clevite main bearings (PN CB1776A108).

With the crank torqued to spec, we started sliding in our slightly used 5.3L piston and rod combos. The rings were just inexpensive stock-replacement pieces from the local auto parts store. The 0.010-inch undersize bearings were Clevite AL Series (PN CB-663P).

After securing the cam with a Summit LS thrust plate (PN SUM-150106) we went ahead and installed the timing set, making sure to line up the dots on the sprocket and timing gear. The sprockets we had and the timing chain was a new replacement from Summit (PN SME-143012).

Oil pumps are pretty critical, so resist the urge to reuse an existing one. We’ve had great luck with these new ones from Summit (PN SUM-121170) and, at just $70 it’s cheap insurance.

Our block came to us bare so we needed hydraulic lifters and a set of the plastic guide trays. The easiest route was a kit from Summit (PN SUM-HTLSKIT) that included 16 lifters, four trays, and even the four specialized bolts needed for installation.

Rancho Machine went through our 853 heads, cleaned them up, and surfaced them just enough so we would be assured of a good head gasket seal.

After sliding on Fel-Pro replacement head gaskets, we put the heads in place and bolted them down with a torque-to-yield head bolt kit from Summit (PN SUM-910210).

We opted to go with a factory-style EFI setup. The intake we chose is a new offering from Dorman. In testing, we found it to be better than a GM LS1 or even LS6 intake manifold. As a bonus, it came with bolts, gaskets, and new fuel injector O-rings. Ours ran $400 from Summit (PN RNB-615-901).

The fuel rail and injectors are actually used GM stuff from an old LS1 project. We’re looking at just over 400 hp, so even smaller fuel injectors will work. Just make sure they are the right height to work with your fuel rail.

Our early Gen III 5.3L LS uses a cam position sensor that mounts in the rear of the engine, just behind the valley cover. This one from Summit (PN RNB-917-715) set us back $34.

Coils are another item that you could scrounge up at a salvage yard, but we opted for a new set from Accel (PN ACC-140043K-8). The LS valve covers and coil racks were left over from another project. We did have an interference issue with the LS1 fuel rail and the more modern LS3 valve covers and coil pack rails. Our solution was to notch the coil pack rack a bit and flip the one coil forward using two small spacers (or a stack of washers in a pinch) to help the coil clear the coil rack.

We completed our budget 5.3L mill with a used GM oil pan and damper and added a set of Hooker long-tube headers. The Dorman intake accepts a four-bolt throttle body so we ran a Holley 90mm piece. Our guesstimate is that you could, with careful shopping and a few trips to the local bone-yard, duplicate this build easily for under $3,500.