Newsletter
Sign Up today for our FREE Newsletter and get the latest articles and news delivered right to your inbox.
Home » Installing a Triple Pass U.S. Radiator 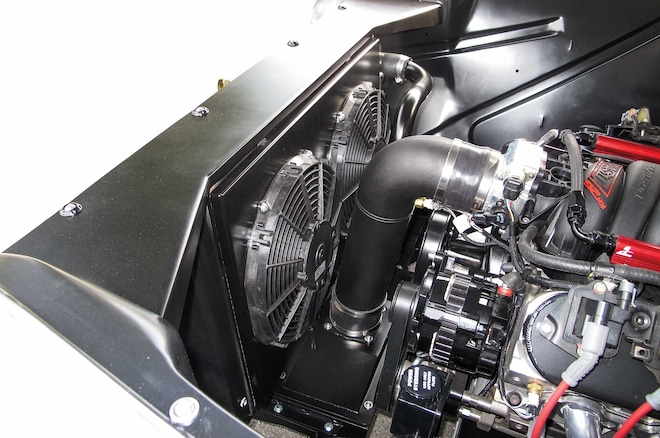 Things sure have changed in the quest for horsepower. Some of us can remember when a high-performance engine that produced 1 hp/ci was a big deal, today those numbers are readily available in a crate motor with a warrantee. And if you want to up the horsepower on tap a few simple tweaks will produce numbers that could only be imagined not long ago.

While horsepower is easier to come by than ever, it can place increased demands on other systems. Obviously the chassis and drivetrain have to be able to handle what comes their way, but the biggest challenge is often keeping a high-performance engine cool.

On a daily basis our tech center’s fearless leader, Jason Scudellari, deals with specialized vehicles packing lots of horsepower. Consequently he knows how important it is to have a cooling system that is effective-and there was no way that the stock radiator in his 1956 Chevy pickup was going to cool the 383 LS stroker motor that would be powering it.

Knowing full well that there is nothing worse than a vehicle that overheats in use or pukes out the dreaded “green river of death” every time its parked, Scudellari wanted the ultimate in cooling capacity. So keep his truck’s operating temperature under control in every conceivable situation Scudellari chose a Triple Pass radiator from Don Armstrong’s U.S. Radiator.

After deciding what type of radiator to use the next concern was moving air through its core. To take care of that U.S. Radiator fabricated an aluminum shroud that mounts a pair of Spal electric fans on the backside of the core (electric fans are more effective as pullers than pushers).

Installing a crossflow radiator in place of the truck’s original downflow cooler required some fabrication. Scudellari made a lower cradle to support the bottom of the radiator and an upper bracket to hold it in place. In addition, the combination of the LS engine and a radiator with the inlet and outlet on the same side would require some unique hoses. The solution to that problem was an amalgam of steel tubing and short sections of rubber hoses to get coolant to the radiator and back to the engine.

Additional item that should be added to most cooling systems is a recovery tank. When an engine is shut off the coolant stops flowing through the radiator, however the coolant continues to absorb heat from the heads and block. As a result the temperature in the cooling system rises, the coolant expands increasing the pressure in the system to the point where the radiator cap’s rating is exceeded and liquid is released through the radiator’s overflow. When the system cools and the coolant contracts something has to replace the volume of the fluid that was lost. Without a recovery system air is drawn back into the radiator. As a result after dumping out coolant a few times the level in the radiator can get low. Under normal circumstances a recovery tank will keep the radiator full-any coolant that is pushed out is drawn back in.

With the Triple Pass radiator from U.S Radiator in place, a custom shroud, twin electric fans, and custom-made plumbing Scudellari’s truck has a cooling system capable of handling the demands that will be placed on it. There’s no doubt that this is one hot truck that won’t lose its cool.

To hold the bottom of the crossflow radiator a small crossmember with U-shaped cradle was fabricated. A rubber pad protects and cushions the core.

A similar C-channel cradle is used to support the top of the radiator as well. Scudellari integrated this mount into the upper core support that he fabricated.

Originally the upper radiator bracket covered just the core. Scudellari decided to extend both ends. This is a template for the pieces to be added.

The extensions for the upper radiator bracket were formed on an Eastwood bench top brake.

This is how the upper mount appeared before the extensions.

After a test-fit the upper bracket was removed and the additional pieces were welded on.

The extensions fill the gap between the ends of the upper bracket and the inner fender panels for a much cleaner look and additional support.

To fabricate the radiator plumbing sections of mild steel tubing were used.

Construction of the lower connector began with marking the first cut on a U-bend.

A trip through a band saw eliminated the excess straight portion.

The shortened U-bend was attached to the engine with a short section of hose; it was then marked for the second cut.

After second cut of the U-bend a short section of straight tubing and a piece of hose would be used to connect to the radiator.

With the shape of the lower connector confirmed it was clamped to the welding table.

Scudellari fired up the TIG welder to make two pieces of tubing one.

Next was the upper hose, it would be slightly more complicated. Here the first cut is marked.

With the first cut made the second is marked. The end result would be a 90-degree bend.

To ensure this cut was straight the tubing was clamped into a horizontal band saw to be trimmed.

The first section of tubing was clamped in place then the second 90-degree bend was positioned and marked for trimming.

To maintain proper alignment the two sections of tubing were tack welded together.

With the first two 90-degree bends in place, marks were made to cut the third.

Alignment marks were made so the third bend could be welded on in the proper position.

To prevent the hoses from slipping off the hard lines, Scudellari had Mesa Hose roll a bead on each end.

This is the completed and painted upper hybrid hose.

Here the bottom connector is in place.

The modified and painted upper mount completes the radiator installation.

The last thing on the to do list was the installation of a recovery tank.