Newsletter
Sign Up today for our FREE Newsletter and get the latest articles and news delivered right to your inbox.
Home » How To Do An EFI Conversion – From Carburetor to Contemporary 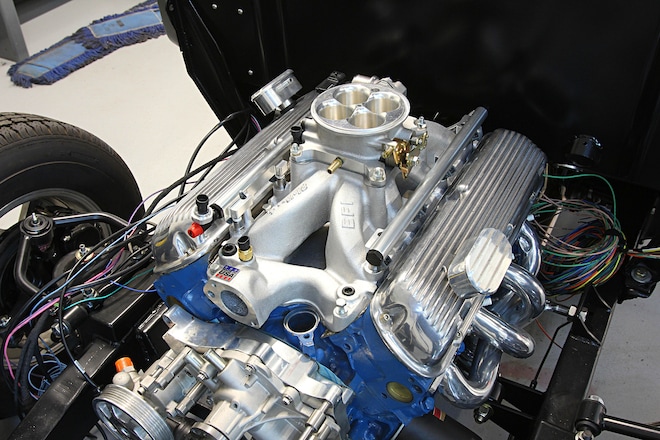 It should come as no surprise that we’re pretty big proponents of EFI. The reliability, the increased performance, the improved efficiency, there’s really no reason to make the jump from carburetion to injection in this day and age. Even when a budget-minded build is considered, with a large number of EFI systems offered under $2,000, you’d be hard pressed to buy all the components necessary to construct a traditional carbureted setup. But while there are a number of improvements that come with an EFI system, there are a few things that might scare off the uninitiated.

For starters, there are more sensors, and therefore more wiring, in an EFI system. Most retrofit EFI systems (4150-style throttle bodies) use a Speed Density tuning strategy to determine the proper fueling for the engine by compiling info from the throttle position sensor (TPS), manifold absolute pressure sensor (MAP), rpm, an oxygen sensor (O2), coolant temp sensor (CTS), and manifold air temperature sensor (MAT). Some of these sensors are used to determine safe parameters of operation while some are sending information specific to the proper tuning of the EFI system.

Most of the wiring, however, comes as part of an existing harness from the manufacturers, which means the end user simply needs to lay out the harness and make the necessary connections. A good pair of battery connections (12V+ and ground), 12V+ switched, and perhaps a few more wires to send a tach signal or to trigger an electric fan(s) are all that are really required to connect separately. At the end of the day, the additional wiring requirements are just as simple as installing an ignition box. An EFI system doesn’t like big voltage fluctuations, so a good functioning battery and charging system are also a requirement, but your truck is probably not suffering from charging issues, right?

So, when it came time to sort out the induction system on our 1952 Ford F-1 project truck, it should come as no surprise that we decided to remove the carbureted intake manifold from the Speedway Motors 302 crate engine to swap for an Edelbrock Pro-Flo 3 EFI setup.

While 4150-based throttle body EFI setups are nothing new, what sets Edelbrock’s Pro-Flo 3 system apart is the fact that it’s a tuned-port design, where the injectors are installed at the intake runners, directly over the intake valves, as opposed to up inside the throttle body. This allows for more precise fueling, better economy, and improved performance.

It should be noted that while a traditional dual-plane intake will work with a throttle body EFI system, the open plenum design of a single-plane works much better at evenly distributing the air/fuel mixture, mainly due to the MAP sensor’s inability to properly measure the signal from both cylinder banks when a divided plenum is used.

One of the caveats we had when it came to installing an EFI system, however, was the fact that we wanted to retain the stock in-cab fuel tank. We didn’t want to cut a hole in our gorgeous bedwood and had previously restored the tank, so we were “all in,” so to say. That meant that running a return line back to the gas tank, something most EFI systems require, would be frustrating, to say the least. After talking with the guys at Edelbrock, however, it turns out they’ve already thought up a solution to a problem we just realized we had! They referred us to their Universal EFI Fuel Sump, which is designed to retrofit the stock, carbureted application to an EFI system. By simply installing the sump kit, the original mechanical fuel pump and lines are retained and used to feed the sump, which increases the fuel pressure to that of an EFI system (35-90 psi). This solves the fuel pressure issue as well as negating the need to run a return line back to the tank as the sump regulates the fuel pressure and modulates the fuel as needed. A small 5/16-inch fuel line vent is all that needs to be run back to the tank (we installed ours in the filler neck).

While we were starting from a bare canvas, as far as our induction system was concerned, those of you with a stock carbureted application will face similar issues. Using your existing fuel system, it’s a simple manner of installing a couple Edelbrock products to get that old hauler into the 21st century.

Here’s the small-block Ford engine we’re using in our 1952 Ford, straight outta the crate from Speedway Motors. The 300hp motor will provide plenty of grunt for our pickup, but came set up for a four-barrel carburetor. We’re going to go a different route, however.

Instead of slapping an antiquated carburetor on our new Blue Oval brute, we’re going to top it off with Edelbrock’s Pro-Flo 3 EFI system. Starting with a traditional 4150-style single-plane intake manifold, Edelbrock installs an octet of 29 lb/hr fuel injectors on top of the intake ports, pointed directly at the intake valve, held in place by a pair of aluminum fuel rails. A throttle body with four throttle blades arranged in a conventional four-barrel pattern replaces the carburetor at the center of the intake and houses the throttle position sensor (TPS), idle air control valve (IAC), and manifold absolute pressure (MAP) sensor. A coolant temp sensor (CTS) is mounted in the intake while a fuel pressure sensor sends the necessary signal from the fuel rail. Two additional sensors will need to be located separately, an O2 sensor, which will be mounted in the exhaust, and a manifold air temperature (MAT) sensor, which will be mounted in the air cleaner. Our kit also consists of the Pro-Flo 3 ECU and wiring harness, a plug-and-play distributor, and fuel system kit. Since we’re going to retain the stock gas tank, we’re also going to be using Edelbrock’s Universal EFI Sump Fuel Kit, which will ensure the fuel system is provided the proper fuel requirements.

The first step in converting our carb setup to EFI is to swap the existing intake manifolds. After the original carb manifold is removed, new intake gaskets are set in place and the Edelbrock Pro-Flo 3 intake installed.

With the engine rotated to TDC on cylinder number one, the distributor is dropped in place and connected to the Pro-Flo 3 wiring harness. Note the CTS mounted in the water jacket next to the distributor. This is also mated to the EFI harness.

The Edelbrock Pro-Flo 3 kit also comes equipped with a throttle and transmission kickdown/TV cable bracket. Here, a Lokar throttle cable is attached to the throttle body’s linkage as well as a Lokar AOD TV cable. The TV cable is initially adjusted following Lokar’s instructions and will be dialed into Ford’s specs once the truck is up and running.

Installed the MAT sensor is a simple manner of drilling the appropriately sized hole in the air cleaner base, slipping in the provided grommet, and installing the sensor.

The O2 sensor is slightly more involved as it requires welding the provided bung in the exhaust, but can be handled by any decent exhaust shop.

Since our original plan called for a carbureted setup, our stock gas tank was left configured as such.

Converting to EFI requires a significant increase in working fuel pressure as well as the addition of a return line if the stock system is to be used as-is. Thankfully, Edelbrock has a simple solution to transform the traditional carb setup to EFI without adding extra lines or modifying the stock fuel tank in the form of their Universal Fuel Sump Kit. This self-contained system is easily installed under the hood to increase the working fuel pressure from a carbureted pressure (3-10 psi) to what an EFI system requires (35-90 psi).

To feed the Fuel Sump we’ll be using an Edelbrock Quiet-Flo electric fuel pump mounted on the framerail and plumbed directly to the stock fuel tank’s outlet. From there, the fuel will be sent to the Fuel Sump at 6-1/2 psi to be increased to a working pressure of 45 psi.

Under the cab, we’re using Russell Performance ProFlex hose to run from the tank’s outlet to a frame-mounted Edelbrock fuel filter. From there, the line will run forward to the aforementioned Quiet-Flo fuel pump and onward to the Fuel Sump.

Inside Edelbrock’s Universal EFI Fuel Sump, a pair of composite floats control the flow of the low-pressure incoming fuel to an EFI fuel pump. From there, the EFI fuel pump increases the pressure of the fuel to the required working pressure via an internal, adjustable fuel regulator. The fuel pressure regulator can also be boost-referenced for supercharged applications and features a rollover valve to prevent fuel spillage.

The one additional line that needs to be run is a 5/16-inch fuel line from the sump’s overflow vent back to the fuel tank. We opted to run the overflow line back to a bung welded to the fabricated fuel filler neck to avoid modifying the stock tank.

Here’s the Edelbrock Adjustable Fuel Sump as installed on the inner fender, plumbed, and wired.

To provide the spark to our SBF, we opted to use a set of Edelbrock’s 8.5mm MaxFire High Performance spark plug wires, lit via PerTronix Flame-Thrower HV 60,000V coil.

Here’s the finished engine, plumbed, wired, and ready to fire. Once the system is powered up, a handful of parameters are entered into the ECU using the provided tablet or any Android device loaded with Edelbrock’s E-Tuner app. The Pro-Flo 3 ECU is equipped with Bluetooth technology that allows the end users to access the system wirelessly, which is pretty handy when it comes to things like adjusting the idle speed target as you can set the tablet nearby while the idle air screw is adjusted, watching the IAC percentage as you work. After the required info is inputted, the Pro-Flo 3 software sets off, writing the fuel maps necessary to get your engine up and running, self-learning via the installed sensors and base map designed by Edelbrock.