Newsletter
Sign Up today for our FREE Newsletter and get the latest articles and news delivered right to your inbox.
Home » FiTech Ultimate LS Induction System 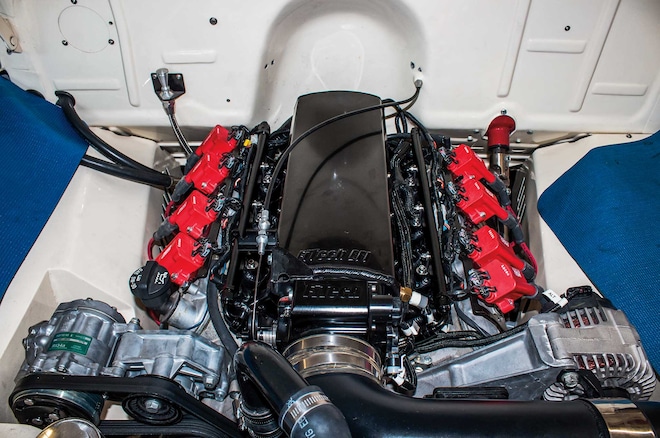 It’s hard to believe that General Motor’s LS series of engines have been with us for 20 years. Introduced in 1997, performance enthusiasts quickly learned all this new design had to offer—these all-new engines were light, had a rugged block and internal parts, came equipped with excellent breathing aluminum heads, and were full of untapped potential. If there was a drawback to LS engines early on it was the same as any new, state-of-the-art component—they were expensive.

GM didn’t waste much time expanding its LS offerings and soon a broad range of engines in various displacements were being produced for use in all manner of vehicles—all had aluminum heads while blocks were either aluminum or cast iron. As the LS series in all its forms grew in popularity with lowriders, crate engines became available, and thanks to the number of these engines that were produced over the past two decades they have become readily available in wrecking yards as well.

Regardless of where an LS comes from, out of a crate or a donor car, there’s more to installing one than simply dropping it in the engine compartment. These engines rely on electronic control units to operate the fuel injection and ignition systems and they won’t run without them. There have been a number of options to make them run, such as using a factory harness with all the unnecessary wires removed, along with a reflashed ECU, but the results were often less than satisfying. Another option was to use separate aftermarket controllers for the fuel and ignition systems, a complicated and costly approach. But now there is a third option that is effective and affordable; the Ultimate LS Induction System from FiTech. It includes everything you need to make an LS run, including a single, state-of-the-art ECU that manages spark and fuel delivery with an optional transmission control feature for 4L60, 4L65, 4L80, or 4L85 GM transmissions. Think of it as the trifecta of control units.

FiTech is an innovative aftermarket fuel-injection manufacturer, and while the name may be relatively new, the brain trust heading up the company, Ken Farrell and Jeremy Schmidt, have decades of experience in aftermarket and OEM fuel injection. We first met Farrell many years ago when he designed and brought to market the very first self-contained, self-learning, throttle-body EFI system that looked like a carburetor. Since then Farrell and Schmidt joined forces, which led to the production of ECMs for industrial, marine, and even OE applications. All that accumulated technology led to the completion of one of their original goals, an easy-to-install, affordable aftermarket fuel-injection system using OEM level engineering and components.

When the doors to FiTech first swung open they offered basic throttle body kits that were full featured yet very affordable. But it wasn’t long before their product line grew to include systems that would support up to 1,200 hp. Systems for dual-quad throttle bodies, nitrous, boosted, and even E85 applications all became available. But their latest offering may be the greatest—complete induction and ignition packages with everything needed to get an LS engine up and running.

FiTech’s Complete Self-Tuning Induction Systems for LS engines are available with a fabricated aluminum or composite intake manifold. A self-learning ECU with a touch-screen controller for setup provides sequential fuel and spark control (and transmission control, if required). The ECU will make continuous changes to the engine’s state of tune with information from a variety of sensors, including the factory knock sensor that detects and protects engine from detonation and adapts system to octane levels. All the other required sensors, including a Bosch wideband oxygen sensor, are included.

While FiTech’s LS systems are for any engine in the series there are some differences in the engines to be aware of. The original Gen III car and truck LS engines had the cam sensor at the back of the block and used a 24-tooth crankshaft reluctor (the cam sensor basically tells the ECU which cylinder is going to fire and along with the crank position sensor supplies the information to adjust ignition and fuel injector timing). With the introduction of the Gen IV LS2 in 2005 the cam sensor was relocated to the timing chain cover. Then in 2006 when GM switched to a 58-tooth crank reluctor. Determining the engine’s reluctor type can be done by checking the color of the crankshaft position sensor mounted above the starter—black sensors are used with 24x reluctors, gray sensors are used with 58x reluctors.

FiTech has made LS engine swaps more affordable than ever. Complete Ultimate LS kits carry a price tag similar to a quality carburetor, manifold, and ignition system for a non-LS engine. And the installation is only slightly more complicated than an intake manifold swap. If there isn’t an oxygen sensor one must be added to the exhaust system. The ECU has to be mounted and the plug-and-play wiring harness installed. An air cleaner and an appropriate fuel pump and filters are required (also available from FiTech) and that’s about it. Once all the components are in place, all that’s left to do is answer a few questions on the handheld programmer, such as displacement, cam specs (stock, mild, or race), number of cylinders, and target air/fuel ratios form the VE map. Then all that’s left to do is hit the road and let the ECU learn as you drive, without any control issues.

FiTech’s new Ultimate EFI is a complete, full-featured system that makes installing an LS engine in any vehicle simple and affordable.

This is FiTech’s fabricated aluminum intake. It’s TIG welded, black anodized with an embossed Fitech logo. Think of it as a single plane performance manifold as it has a 1,500- to 6,500-rpm powerband.

The FiTech-fabricated intake is CNC machined with O-ring gaskets and all hardware included. Although it is a short runner design it is physically taller than the composite manifold.

The composite intake manifold has long runners so its characteristics are similar to a dual-plane manifold, providing more low-end torque than the fabricated manifold.

While the runners of the composite manifold are longer than the fabricated version, the overall height is less, making it ideal for applications with restricted hood clearance.

FiTech’s ultimate LS system includes everything necessary to make an LS run and is so simple installation is done easily in a weekend—and that’s with lunch breaks.

The FiTech Ultimate LS systems use mass airflow (MAF) sensors to measure the volume and density of air entering the engine. The computer uses this information in conjunction with input from other sensors, to calculate the correct amount of fuel to deliver to the engine.

This is the idle air control (IAC); it keeps the engine’s idle speed constant.

This is the coolant temperature sensor (CTS); it monitors operating temperature for fuel/spark adjustments. To control engine temperature the ECU has two programmable fan control outputs.

The Bosch wideband oxygen sensor provides the ECU with the information that allows the system to self-learn and stay within established air/fuel ratios at idle, cruise, and wide-open throttle.

This is the throttle position sensor. As the name implies it signals the throttle opening, which is used along with other sensors to adjust fuel flow.

Included in the Ultimate LS kit are two oxygen sensor bungs, a clamp on and a weld on.

All the wires in the FiTech harness are clearly labeled. To further eliminate any confusion none of the weather-tight plugs are interchangeable, making mistakes virtually impossible.

The color touch-screen controller makes setup and configuration of the system quick and easy, no laptop or tuning experience is required. While the self-learning function will optimize tuning, the air/fuel ratios and timing adjustments can be made on the fly, if desired.