Newsletter
Sign Up today for our FREE Newsletter and get the latest articles and news delivered right to your inbox.
Home » Fabricating A Custom Air Cleaner 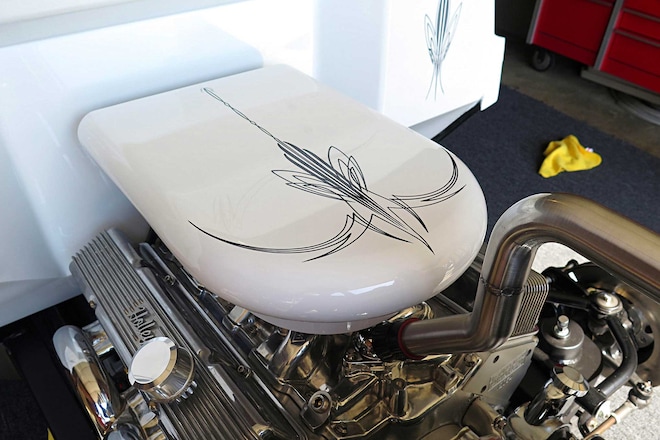 Today the state of the classic truck art is such that it takes something special to catch an onlooker’s eye. Walk through any event and it’s obvious that build quality and craftsmanship are at an all-time high. But even with all there is to look at on a well-executed truck it’s somewhat ironic that what often sets one apart from the others is often a small custom detail.

Jason Scudellari understands the concept of small details. As manager of Motor Trend Group’s Tech Center he deals with a variety of magazine project vehicles that are subjected to intense scrutiny, so paying attention to the little stuff is part of the job. That job skill carries over to his personal projects as well.

We’ve documented a variety of the modifications Jason has made to his 1949 Chevy pickup, all have been unique in their own way and the custom air cleaner shown here is typical of the personal touches found on his truck. Starting with a scrounged oval air cleaner base Scudellari used an exhaust tubing U-bend and two pieces of straight pipe from Summit Racing to establish the basic shape of the custom air cleaner. To enclose the housing a top cut from 16-gauge steel was welded in place, under it is a replacement element from Summit. On the inside of the perimeter tubing a strip of 16-gauge sheetmetal was used to enclose the filter and extend down far enough to conceal the throttle linkage and fuel lines.

Once Scudellari’s creation was complete it was turned over to Superstition Restoration in Mesa, Arizona, to be covered in the same brilliant Ice White paint they squirted on the truck not long ago. Finally Jeff Styles added the finishing touch with some cool classic pinstriping.

This one-off air cleaner is a perfect example of a small custom detail that has a big visual impact. Best of all this was a simple project that cost next to nothing to build-here’s how it was done.

Jason Scudellari built this cool custom air cleaner from exhaust tubing, sheetmetal, and a discarded air cleaner base. You won’t see another like it-and that’s the point of custom details.

The foundation of the new air filter housing is a discarded aluminum base from an aftermarket oval air cleaner; it was modified by welding a strap across the opening.

Two additional holes were drilled in the base; they will be used to attach to the fabricated top.

The modified base was installed to check clearances. Thanks to the extension on the opening there was no interference with the fuel lines or linkage.

A replacement oval air cleaner element was ordered from Summit Racing Equipment. A wide groove in the base (visible in the previous photo) holds the element in place.

A 2-1/2-inch exhaust tubing U-bend with extensions welded on established the shape of the air cleaner housing. Here Scudellari marks metal to be cut for the air cleaner’s top.

The 16-gauge sheetmetal for the top was carefully cut on a bandsaw.

With the top properly positioned on the tubing perimeter it was clamped in place on the welding table.

A Miller MIG machine was used to tack weld the top in place. The spaces between the tacks would be filled until the top was completely welded.

Here Scudellari measures for the enclosure that will be added to the inside of the tubing. Note the two studs that will secure the top to the base.

Again, a strip of 16-gauge sheetmetal was used to make the inner enclosure.

The inner strip was formed by wrapping it around a welding bottle-not high tech but it works.

Here’s the bottom enclosure in place for a testfit. It extends down past the tubing in part to hide the filter element and the aluminum base.

Satisfied with the fit, the Miller MIG was hauled out once more to tack the sheetmetal skirt to the housing.

Tack welds were used to secure the lower enclosure to the housing-welding it solid isn’t necessary.

After a trial fit Scudellari decided to extend the sheetmetal skirt to hide more of the fuel system components.

Here’s the addition added to the left side of the housing.

A small addition was also made to the right side to hide the distributor.

The studs attached to the top shown earlier fit through the holes drilled in the base. The assembly is held together with a pair of wingnuts.

With all the welding completed the visible beads where the top joins tubing were ground down.

Superstition Restoration finished smoothing the welds and then covered the housing in Ice White basecoat/clearcoat.

The final step in the creation of this custom air cleaner was the application of classic pinstriping applied by the steady hands of Jeff Styles.