Newsletter
Sign Up today for our FREE Newsletter and get the latest articles and news delivered right to your inbox.
Home » DIY: Fabricating a Custom Radiator Cover 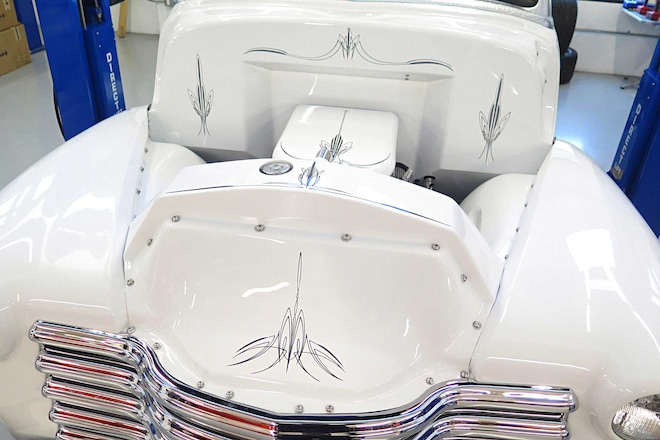 Over the years we’ve found if we leave our Motor Trend Group Tech Center manager, Jason Scudellari, alone for very long with some odd pieces of sheetmetal he’ll make something unique to add to his 1949 Chevy pickup truck. Not long ago he fashioned a truly unique custom air cleaner. This time he whipped up a combination radiator baffle/cover.

Like many trucks of the era, Scudellari’s Chevy had a sheetmetal baffle to direct incoming air through the grille into the radiator’s core. While effective, these baffles were not particularly attractive so Scudellari decided to make some improvements, and the result is cool for two reasons. From an aesthetic standpoint it’s cool because the modified baffle cleans up the engine compartment considerably; from a practical standpoint it retains its original function, helping to keep the engine cool.

Starting with a reproduction radiator baffle from LMC, Scudellari formed 1/2-inch stainless tubing to follow the contour of the radiator; then he added strips of 18-gauge sheetmetal to the tubing framework to cover the top tank. To smooth the front of the baffle the indented area where the hood latch would mount was filled with sheetmetal and smoothed. With all the welds ground, the customized baffle was delivered to Superstition Restoration in Mesa, Arizona, for final metalwork and paint.

Returned to the Tech Center, the finished baffle was put in place and secured with chrome button-head fasteners. Then it was Jeff Styles’ turn to apply the final touch with some classic pinstriping to match the lines he laid earlier on the firewall and air cleaner.

We’ve said it before but it bears repeating: What sets one classic car apart from another isn’t the amount of money spent but the creativity invested. Scudellari’s undercover cooler is a perfect example of the latter.

The custom radiator cover began as a stock replacement baffle from LMC Truck.

With the baffle bolted in place, Scudellari formed a length of 1/2-inch stainless tubing to mimic the shape of the radiator’s top tank.

The shape of the repop baffle was traced onto a sheet of 18-gauge steel-this will be the front section of the radiator cover.

With the front portion of the cover laid out it was cut to shape on a bandsaw.

Viewed from the rear, the stainless steel tubing can be seen.

A second length of tubing was formed to complete the shape of the radiator cover’s top section.

All the painted and polished surfaces were covered and then lengths of flat stock were welded in place to hold the tubing framework together.

With the tubing framework secured, a paper pattern was made for the top.

The paper pattern was marked for width from underneath. The pattern was then transferred to 18-gauge sheetmetal.

After tack welding the top section in place, two small filler panels were added to each side.

The top panel and the filler pieces on each side were secured with closely spaced tack welds, which were then ground smooth. Note how the tubing provides a rounded edge.

To enclose the back of the radiator a paper pattern was made that follows the contour of the inner fender panels and fits around the electric fan shroud.

The pattern was transferred to sheetmetal, the notch for the upper radiator hose will allow the cover to be removed and replaced without disturbing the top hose.

With the radiator cover attached to the stock baffle the fit to the fenders and the ability to remove and replace the complete assembly was verified.

To further detail the cover, Scudellari split a length of tubing to make a cover for the top radiator hose connection.

After welding the rounded top in place the sides of the hose cover were extended by adding straight sections of sheetmetal.

For access to the radiator cap it was necessary to cut a hole in the cover’s top. To locate it correctly this was a great example of measuring twice and cutting once.

To give the access hole a finished look a section of tubing was added to the opening.

The tubing insert was cut to length and then tack welded to the cover and ground flush.

To give the stock baffle a smoother look the indentation for the hood latch assembly was cut out and filled with sheetmetal.

With the fabrication completed all the seams and the filled section of the baffle were thoroughly sanded.

The finished cover was turned over to Superstition Restoration to be prepped for paint. Body filler was used to smooth all the seams and the filled section in the center of the baffle.

After sanding, applying filler, more sanding, and primer, the cover was wiped clean in preparation for paint.

Mike Rossi of Superstition Restoration was responsible for pulling the trigger on the spray gun.

Jeff Styles and his steady hands were called upon once more to add the final detail to the Chevy’s cooler cover.