Newsletter
Sign Up today for our FREE Newsletter and get the latest articles and news delivered right to your inbox.
Home » Building a Cool Cold Air Intake System 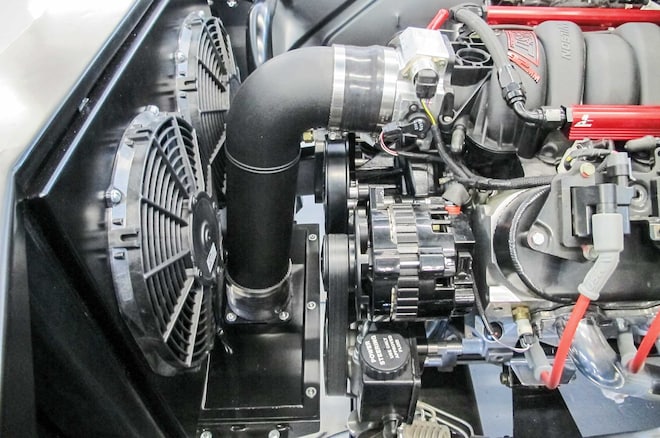 At one time the most obvious component on many “hopped up” cars and trucks was a hood scoop. The reasons given for using them included the ram air effect, a cooler air source, or they just looked intimidating.

During the muscle car era the manufacturers began to look at cold air intake systems, too. High-performance vehicles could be found with fixed hood scoops, some that opened and closed on demand and cowl induction systems, just to name a few. The factory engineers knew that drawing denser, relatively cool outside air into the engine, rather than the warmer air from under the hood, was an easy way to improve performance.

With the advent of port-style fuel injection most manufacturers have elected to use remote air filters that are shielded from underhood heat, or draw air from outside the engine compartment. The reason is that with carburetors and throttle body injection fuel is mixed with the air and as the fuel vaporizes some heat is absorbed, resulting in a denser mixture. By comparison, only air passes through the intake manifold of a port-injected engine. As there is no fuel to help lower intake air temperature, starting off with cooler air offers a performance benefit.

In many cases when a port-injected engine is transplanted into a classic truck the simple solution is to attach an air cleaner to the throttle body. Unfortunately that’s a bad idea for two reasons. First that means the engine is getting hot, underhood air, in many cases directly off the radiator, and that’s just giving away horsepower and mileage. The second issue is the turbulent air from the fan causing an erratic idle. This is often noticeable when an electric fan is used—as the fan cycles on and off idle quality changes.

Jason Scudellari, Motor Trend Group tech center manager, was well aware of the advantages a cold-air intake offered. Of course the problem was if he wanted such a system for his LS1-powered 1956 Chevy pickup, he’d have to make it.

To house the filter Scudellari fabricated a two-piece cold-air box with an integral scoop that fits below the bumper. Filter changes are accomplished by removing the screws that hold the two halves of the air box together.

Connecting the air box to the throttle body required a short section of straight tubing, a 90-degree bend and a pair of couplers. Scudellari found that a plastic elbow had a tighter radius making it a better fit than the metal variety.

Bringing cooler, denser air to your truck’s engine can improve performance and increase mileage as well. Building a cold-air box is certainly worth the effort; that’s apparent.

Jason Scudellari built this simple and effective cold-air intake system for the fuel-injected 383-inch LS1 in his Chevy pickup.

Summit Racing offers a variety of air inlet components for custom intake systems. Tubing can be steel, stainless steel, aluminum, plastic, or a combination of materials.

Construction began with the fabrication of the filter housing from 16-gauge steel. This is the flange that will connect to the hose leading to the engine.

A Rotabroach was used to drill holes that will accept threaded inserts.

These are the threaded inserts seen from the backside of the flange mount.

With the thread inserts in place a hole saw was used to make the opening for the attachment flange shown previously.

The flange is attached to the plate with four button-head screws.

Scudellari did a little tape measure engineering to determine placement of the cold-air intake under the radiator.

The framework for the top half of the filter housing was made from 1×1-inch, 16-gauge steel angle.

Here the steel angle was tapered on both sides of the outlet plate.

The mounting plate was tacked to the angle—a duplicate bracket was made for the other side.

With the plate for the flange tack-welded in place the next step was to enclose the sides of the housing.

With both sides of the housing enclosed the welds were ground smooth.

This is the finished upper portion of the air box.

This is an inside look at the upper half of the air box.

To hold the flat panel K&N filter a framework was made from steel 1/8 by 1-inch flat stock.

For the lower portion of the filter box a flange was fabricated from steel angle—the framework that holds the filter will be welded to it.

The filter drops in place and is secured when the two halves the air box are bolted together.

The lower half of the air box was enclosed with a scoop that directs air into the filter.

Here the lower portion of the box is enclosed and an additional piece of the scoop has been added to the upper part of the opening. Note the framework that holds the filter (arrow).

The bottom of the air box/scoop assembly was totally enclosed by adding plates to the sides.

All three components of the air box from the top are the scoop and lower filter housing, the flat panel filter, and the upper box and hose connection.

To mount the air box simple angle brackets were added, they attach to brackets on the frame.

Here is the installed air box as seen from the engine compartment. It fits well below the radiator, picks up air below the bumper, and the outlet has a straight shot at the throttle body.

Once a test-fit confirmed all was well the air box assembly was given a coat of Eastwood Chassis Black.

The finished air box assembly is clean and compact. Note the inlet air temperature sensor has been installed in the bend attached to the throttle body.