Newsletter
Sign Up today for our FREE Newsletter and get the latest articles and news delivered right to your inbox.
Home » Building an LS1 Into a Show Engine 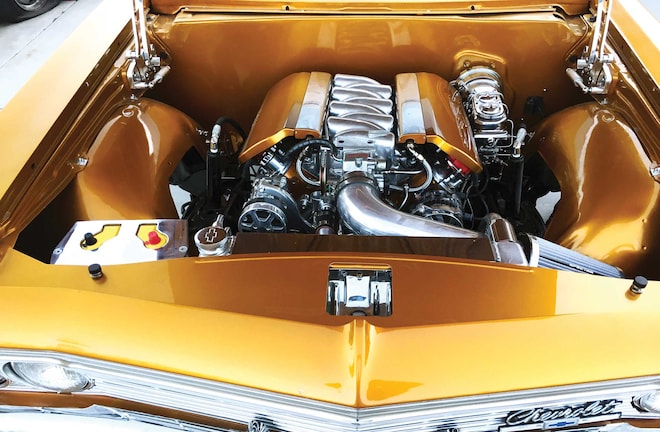 When building a show engine you always want to be different. This was the case for this month’s custom LS build. The LS world has been taking the automotive world by storm as everyone embraces the future small-block of the automotive industry. When these engines came onto the scene they were being polished and chromed out so they would stand out in the engine compartments. Since then, several manufacturers have developed aftermarket parts, giving LS engine builders options when building engines for their cruisers.

Knowing that we didn’t need much power for our ’66 Chevy, we decided to use a modern 5.3 engine that would be equivalent, but more efficient than the factory 327. These used engines are easier to obtain as they are in most GM platforms. From the Chevrolet Suburban to the coveted Cadillac Escalade, these workhorse engines have proven their reliability as some daily drivers have over 200,000 miles on them. With 200,000 plus on them and no signs of fatigue, it was easy for us to choose a low-mileage engine for our build. We picked up our engine and transmission combination complete for a $1,000 out of a running, low-mileage truck.

We knew that we wanted to build something different that would stand out, but we weren’t sure how far we were going to go on this build. After doing some research, we were all in on the show build. For this buildup we installed MSD’s Atomic fuel management system for the LS engine and a separate MSD transmission controller. These kits where designed to be a plug-and-play system that eliminates the OEM harness and computer that operates the engine and transmission.

We also installed a Restomod Air serpentine system that kept the pulleys running perfectly and reliably. For looks, the intake was upgraded with an aluminum intake from Professional Products and it was fed air through a Spectre Performance air intake system. Chrome Energy Suspension motor mounts bolted to the Holley LS brackets allowed us to transplant the modern engine into this almost 50-year-old classic.

The actual transplant of this engine was done in a few hours, but all the prep work involved took a few days as we jumped around on this build. Once we assembled the engine to our desire, we mocked it up. The engine wiring was done by the Ultimate Restorations team, leaving the engine turnkey for us. Now follow along as team Wild Child Customs shows you how this LS clone was transplanted into this custom 1966 Impala coupe.

1. The LS1 5.3 engine and trans was pulled from a low-milage truck for about a grand.

2. With the engine torn apart we applied a fresh coat of Axalta Desperado gold finish on it.

3. Once the engine was dry from the two-stage water-based candy, we started the custom reassembly of the engine. With show finish on our minds, we opted to use an ARP stainless bolt engine kit.

4. To make sure that our pulleys wouldn’t be hitting the intake we started off the assembly by installing the top portion of the Restomod pulley setup.

5. We checked the heads and once we knew what we had the cathedral ports it was easy to install Fel-Pro gaskets and pick our LS1 intake from Professional Products.

6. As you can see, the pulleys were straightforward and the only obstacle that we encountered was with the power steering bracket.

7. At this point we did what any builder would do and that was jump into the fuel rail management system.

8. The MSD Atomic system was all self-controlled and self-learning.

9. As you can see from the backside, the computer system is under the fuel rail covers.

10. The kit came with all the plug-and-play wiring and sensors needed to operate the system.

11. The LS1 engine block has this treaded mounting point cast into it and the 5.3 and 4.8 engine blocks don’t. After assessing our power steering situation we built our own bracket.

12. We used an aftermarket harmonic balancer and torqued it down to factory specs of 120 lb-ft of torque.

13. Knowing that we had to build our own motor mounts, we chose to use the motor mounts that wouldn’t throw the engine mounting point too forward.

14. We mocked up the engine to ensure everything from the Lokar dipsticks to the Holley exhaust manifolds would fit.

15. After doing several engine swaps you learn that they are all similar in one way or another. We started by bolting down the transmission so the engine wouldn’t move around.

16. As you can see, the Energy Suspension motor mounts are directly over the factory location, just taller so that the engine’s oil pan doesn’t hang below the crossmember.

17. These motor mounts came together quickly as we tack welded them on the engine and finished them off the engine allowing more attention to detail.

18. These motor mounts are basic, but serve their purpose.

19. On LS engines, the grounds are very crucial and most of the engines will have up to six ground straps. When transplanting, you need to make sure that you keep the minimum of four grounding points.

20. To ensure that we had a clean fuel system, a new Cars Inc stainless steel gas tank was used and equipped with a universal Aeromotive fuel pump system.

21. With the car fully assembled we were able to finish the install. We started off using this intake setup that gave us an idea how much room we had and how to route the necessary plumbing.

22. Once we knew how much room we had, we cut our air intake tubes down to the size we needed.

23. This radiator line had a steam port that allows the air pockets to flow out of the engine.

24. This custom radiator hose was done in two sections and will allow the proper flex needed when the car is running.

25. The throttle body was removed to give us full access to the plumbing that needed to be done.

26. The Spectre air intake and filter was reassembled for the last time and we were able to continue wrapping up our assembly.

27. The steam port line was hard lined to the radiator hose. This will ensure that our engine doesn’t overheat because of air pockets trapped in the heads.

28. The throttle body was reconnected and the TPS sensor was plugged back in.

29. This LS clone was ready for the streets or for the show.

Years of Research in the Combustion Field

The days when you changed your spark plugs every couple of years are long gone. It wasn’t that long ago when spark plugs wore out often either. There are a few things that make a huge difference in today’s technology. First off, spark plugs are made of better materials that last longer and are designed a whole lot better. The second reason that plugs used to needed changing more often was that they were fouled up with carbon deposits. Deposits build up on plugs when fuel doesn’t burn completely. Today’s modern engines have computer management systems controlling fuel burn, so plugs do not get as fouled up as they used to. Engine control computers precisely time when fuel is injected into the engine and when spark plugs fire. An engine basically runs when electricity from the battery goes into a coil that allows power to build up to anywhere from 12,000 to 45,000 volts, depending on the vehicle. The engine management computer tells the coil when to release the power to the spark plug. The electricity travels through a wire from the coil to the spark plug. At the tip of the plug, a spark jumps between two electrodes and ignites the gas in the combustion chamber. Some engines have more than one coil. Coils wear out and need to be replaced occasionally. Also, spark plug wires can wear out and need to be replaced too. Today, modern engines are delivering more power and better fuel economy than ever before. That’s largely credited to fast engine control computers, advanced sensors, electronic ignition, and improvements to the spark plug. One last and very important thought: it’s critical to have the right kind of spark plug for your vehicle. E3 Spark Plugs deliver performance that increases power, improves fuel efficiency, and reduces emissions in your custom, classic car, truck, motorcycle, power sports vehicle, and lawnmower engine. E3 Spark Plugs are also designed to run with different internal temperatures. Their patented edge-to-edge ground electrode outperformed other plug designs by far! When it comes to your next tune up, see for yourself why E3 Plugs are “Born to Burn.”