Newsletter
Sign Up today for our FREE Newsletter and get the latest articles and news delivered right to your inbox.
Home » Eddie Motorsport S-Drive Pulley System Install 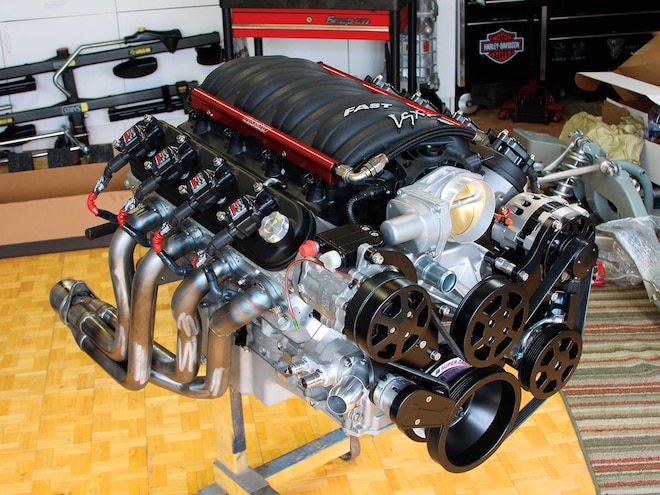 We could’ve titled this story “lipsticking the pig” but the LS series of engines from Chevrolet are certainly not pigs in terms of performance. But, in regards to looks, they can’t hold a candle to older engines we’ve all grown up with. The main problem with LS engines is clutter. All those fuel lines, injectors, coil packs, brackets, and such just drag down how good the engine can look with a little work and the right parts

The other less-than-attractive aspect of newer GM LS engines is the drive system. To be fair, GM is more concerned with putting out a rock-solid and dependable pulley system rather than how pleasing it is to the eye. Also, most GM cars have the A/C mounted low on the passenger side of the engine, so typically this is where the GM drive kits tend to put it as well. This location proves to be more than just a bit problematic when stuffing LS power into vintage Chevy iron and, besides, the GM-style A/C compressor rarely works with aftermarket A/C kits. Some companies offer bracket kits to work with the GM pulley systems and mount a Sanden A/C compressor high on the passenger side, but that doesn’t address the GM system’s lack of good looks. For that we need to turn to the aftermarket. When you go with a system, like the one we’re trying from Eddie Motorsports, you get a kit designed for our older Chevys and as a bonus, it’s very good looking.

So, follow along as we turn an ugly duckling of an LS engine into something that will slide right into your favorite Chevy and look good as well.

1. We start out by installing the S-Drive pulley system from Eddie Motorsports. First up was installing the ATI Super Damper that came in the kit. ATI makes some of the nicest dampers on the market, so it was good to see it in the kit. It also gave us a warm, fuzzy feeling knowing that the kit is made in the USA

2. We then installed three 92mm-long studs to the passenger side of the block. It’s very important to use antiseize on any steel (especially stainless) bolts going into the aluminum block. The studs were screwed in until they protruded 3 inches.

3. Two 118mm-long studs were installed on the driver side and adjusted until they stuck out 4 inches.

4. After installing the included gaskets we slid on the provided Tuff Stuff water pump.

6. The first bracket to go on was for the rear of the alternator. It went over the two long studs on the driver side of the water pump and was secured with two 3/4×1.41-inch spacer posts and one 95mm-long cap screw.

7. The lower A/C compressor bracket was bolted to the passenger head with two 20mm-long cap screws. The S-Drive kit can be ordered with or without A/C and in finishes like black, polished, and satin.

8. After installing the water neck onto the water pump, the compressor bracket was attached to the three spacer studs on the water pump with three 25mm-long cap screws.

9. The Sanden SD7 A/C compressor from the kit was bolted to the bracket with two 25mm-long cap screws at the 12 and 6 o’clock positions.

10. The rear of the compressor was secured with a specialized stainless shoulder bolt. Can you guess what we put on the threads first?

11. Three 1/4-20 cap screws were used to install the compressor beauty cover. Be careful here not to overtighten. Blue thread locker was used on the three fasteners.

12. Two 25mm-long cap screws, with washers, secured the alternator bracket in place. For now we just finger tightened these.

13. The 140-amp Powermaster alternator already had a billet pulley and fan installed so we only had to bolt it to the S-Drive system with one 25mm- and one 80mm-long cap screw.

15. The three 3/8×1 and 1/4-inch crank pulley bolts used special Belleville washers. These use a spring action to lock the bolts in place.

16. After installing three 25mm-long set screws (with thread locker) we attached three 3/4×1.75-inch spacer posts (again, with more thread locker) and tightened them all down securely.

17. The power steering bracket was then bolted to the three spacer posts with three 20mm-long cap screws. This is another spot that called for thread locker.

18. The PS pulley was already installed to the Maval pump, so we simply had to bolt it to the bracket using two 5/16×3-inch caps screws and lock washers.

19. The three 3/8×1 and 1/4-inch crank pulley bolts used special Belleville washers. These use a spring action to lock the bolts in place.

20. We could then install the tensioner beauty cover using two 10-32×3/4-inch flat head screws and some thread locker.

21. Do not install the compressor manifold until you’re ready to install the A/C lines and charge the system. But, this is how it will look when you do install it using two 25mm-long cap screws and some antiseize.

22. The pulley kit only took a couple of hours to install and it made the front of our LS3 look about as good as possible. Best of all, we had an engine that will easily fit into any Chevy we feel needs a shot of modern performance.

23. We installed a set of black Holley LS valve covers, which allowed us to mount the coils directly to the valve covers. We also used Granatelli Xtreme Power LS Series coil packs and matching insulated plug wires. We attached the coils, and the Art Morrison Enterprises headers, with more stainless bolts from our ARP accessory fastener kit.

24. The stock LS3 intake manifold is only a little bit ugly, but this FAST 102mm LSXr intake, in their new black color, looks a ton better, especially with the billet red fuel logs instead of the GM deal. Getting rid of even a little clutter on an LS engine goes a long way in the looks department.

25. We think this looks a ton better than the original LS3 we started with, and as a big bonus all the parts will help us get this into or favorite Chevy and some will even add a few more horsepower to the equation.