Newsletter
Sign Up today for our FREE Newsletter and get the latest articles and news delivered right to your inbox.
Home » Put Some Energy Back Into Your Suspension 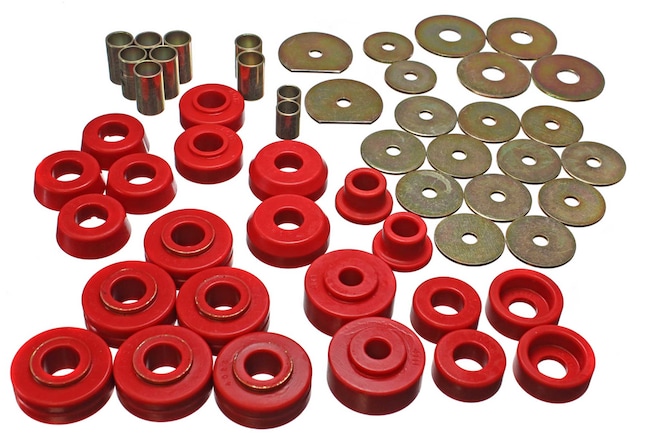 If replacing body mounts helped keep your panels lined up, would you replace them? If someone told you that bad body mounts could lead to flexing and ultimately cracks in your $10K+ paintjob, would you replace them? I can bet that your answer to both those questions would be an easy, “Yes.” The only problem is most painters and builders don’t ever talk about anything other than what they were contracted to do. With that said, it’s extremely important to check the condition of your body mounts because these small “donuts” may be minor in size but have a major impact on how well your car, and your paint, holds up.

Now when it does come time to change them out there is only one brand we trust and that’s Energy Suspension. Created using their Hyper Flex Performance Polyurethane, the particular model we are covering were made specially for 1965-1970 Chevy Impala. These units are available in either red or black and while they are much firmer, and much more durable than OEM units, they are also highly resilient to grease, oil and other contaminants.

While we were at it, we also decided to install a set of Energy Suspension’s

Front Control Arm Bushing sets for the 1965-1970 Chevy Impala. These direct replacements will change the total driver experience by firming up the suspension and offering a more precise feel. In addition, these bushings are much stronger than OEM, thus giving those who lift or lower their vehicle the added benefits of poly bushings that were built to handle the stress and movement of aftermarket suspensions. The Energy Suspension control arm bushings are fully floating meaning the inner sleeve is not sealed to the bushing, which is not sealed to the component. This allows the control arm and bushing to move freely, causing less stress and giving you a better overall ride for a longer period of time.

But even if that all sounded too technical, the bottom line is installation of these units will give you a better ride, better handling and above all, you’ll no longer be squeaking and clanking down the boulevard. That in itself is worth the investment on a product that will make a world of a difference.