Newsletter
Sign Up today for our FREE Newsletter and get the latest articles and news delivered right to your inbox.
Home » Visually Appealing Holley Parts For Your LS 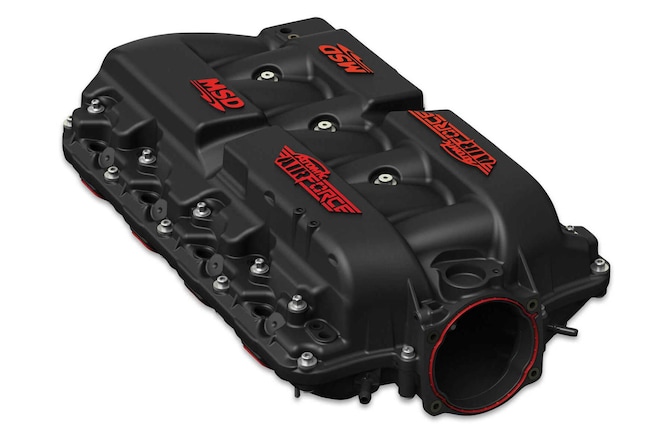 Holley is pleased to announce the release of MSD Atomic Billet Fuel Rails for LS1/2/6, LS7, and LT1 engines. Developed specifically for MSD AirForce Manifolds, they’re available in two versions&mdash;just the fuel rails themselves or in comprehensive kits with the rails, fuel fittings, O-ring fittings, mounting brackets, and all the hardware to plumb the system. MSD Atomic Billet Fuel Rails feature a black-anodized/bright-dip finish with laser-etched logos that’ll look great for years and a 5/8-inch fuel passage with the flow capacity to fuel high-horsepower applications. MSD Atomic Billet Fuel Rails are perfect for MSD Atomic AirForce Intake Manifolds, which just came out in new colors. You can now choose between new solid black or gray logos (in addition to the traditional red). They feature unique bell-mouthed runner entrances that maximize airflow and minimize shrouding, optimizing the available plenum volume for an unobstructed flow path over opposing runners. Atomic AirForce intakes have a huge 103mm throttle bore, a two-piece configuration that makes it easy to custom-pork the intake runners and come complete with gaskets and all the hardware for a direct bolt-on installation.

At first glance, MSD’s Atomic Airforce intake is a visual gem. Made of a polymer material that resists heat soak, while reducing weight, they are designed for use with GM LS1, LS2 and LS6 engines. The unit delivers improved airflow and distribution to improve the performance of stock and modified engines while the unique bell-mouthed runner entrance maximizes airflow and minimizes shrouding. In addition, the design of the unit optimizes the available plenum volume for an unobstructed flow path over opposing runners while the unique two-piece design allows for easy access to the runners for porting. Atomic AirForce accepts an OEM or 103mm throttle body as well as stock or aftermarket fuel rails including MSD’s Atomic LS EFI system. The intake bolts is supplied with new gaskets and hardware for a direct bolt-on package. Note: Use of aftermarket rails may require the use of customer-supplied spacers and hardware.

The LS is a beautiful motor, but the one thing that always comes off as an eyesore is when the ignition coils are left exposed. Now thanks to MSD, they offer aluminum ignition coil covers for the GM LS1 and LS6. Available in in Gloss Black (PN 2971) or Gloss Red (PN 29701), these coil covers are designed to fit over the valve covers and coil assemblies to effectively hide the coil packs and wiring. These coil covers will clean up your LS2/LS3/LS7 engine and the cast-aluminum covers align with the Atomic Smart Fuel Rail assemblies providing a completely smooth contoured finish to the edge of the valve cover. The Atomic Coil Covers will work with OEM coils as well as MSD’s Multiple Sparking Coils.