Newsletter
Sign Up today for our FREE Newsletter and get the latest articles and news delivered right to your inbox.
Home » Edelbrock AVS2 Carburetor – The Future Of Carburetion 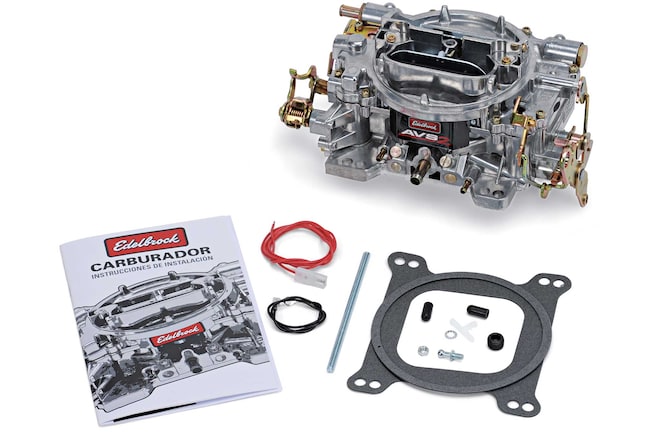 Toying around with an older carburetor is no walk in the park. In fact, it’s more like walking through a forest at night and hearing random noises because carburetors, unless you’re well-versed in turning them, can be a nerve-racking nightmare and a pretty unruly form of fuel delivery.

Well, that is all about to change thanks to Edelbrock’s new AVS2 carburetor. The AVS2 (Air Valve Secondary) is ideal for use in a wide variety of applications for both small-block and big-block engines.

Some of the benefits of the AVS2 include:

One of the keys is the use of their Annual Discharge Booster. Whereas typical carbs use downleg boosters located in the carburetor primary (and shoot fuel down the center of the venturi), Annual boosters feature eight equally spaced smaller holes, which create better fuel atomization, and better fuel atomization eliminates flat spots when the carb transitions from idle to part throttle. So, why does this work better? In simplest explanation, the science behind the increased performance can best be explained in the fact that liquid fuel does not burn, and it is the mixture of vapor and air that makes it combust. Since the AVS2 does a better job at vaporizing fuel, it makes way for increased performance.

The previously mentioned benefits of using the AVS2 are immediate and this truly is the future of carburetors. The AVS2 are available in both Endurashine and Satin Finishes, with manual or electric choke, and come with three different CFM (500, 650 and 800) ratings. For more information, head on over to their website and see what other offerings can fit your build.