Newsletter
Sign Up today for our FREE Newsletter and get the latest articles and news delivered right to your inbox.
Home » Derale A17 Single Powerpack Fan – When Heat Is The Enemy 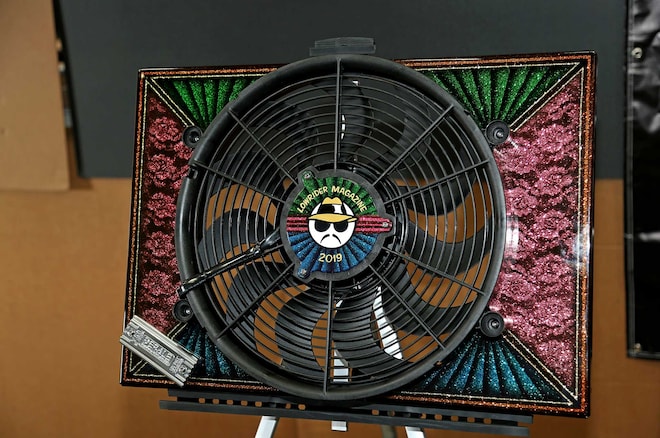 Derale Performance has built a cool reputation for being mitigators of heat. As industry leaders providing premium automotive cooling solutions, they take otherwise hot situations and cool them down—and they’ve been doing it since 1946. The company is now a third-generation, family-owned business that makes cooling products for just about anything that has a motor and their catalog of parts include everything from fan controllers to fluid coolers, transmission cooler fittings to belt driven fans.

Just recently, we put their knowledge and products to the test, and we did so by bringing them a ’64 Impala that was having cooling issues. The car’s problem was that it would overheat within 15 minutes of driving around on the streets, and after Tom Longo—the President of Derale Performance—took a look, he diagnosed the problem in just a few minutes. It turns out the previous setup was a “clean and cool” looking unit, but the shroud was too narrow and the fan was a low-volume unit. In short, it was most likely a China brand setup that was priced better than it performed.

To address the issue, he suggested using one of Derale’s A17 Single Powerpack fan and shroud kits. The A17 Single Powerpack features their ultra-quiet patented skewed blade design, a high-output 265-watt motor and a raw aluminum shroud, which in this case was painted to accent the motif of this lowrider. In addition, the two-speed fan offers up to 24,000 cfm thus creating the most airflow possible. It was mated to one of their PWM (Pulse Width Modulator) Bank Controllers, which essentially eliminates the need for a manual switch or human error in the event you forget to turn it on.

The addition of the PWM Power Bank is a huge bonus as it takes the guess work out of the equation and keeps your fan/shroud setup optimal. Historically, cooling fans run at 100 percent, even when less airflow is needed, constantly turning on and off as the engine temperature changes. This reaction-based temperature control system causes constant amperage spikes, excessive noise and premature wear. The Derale PWM fan controller continuously monitors your engine’s temperature, therefore controlling the temperature and increasing the vehicles cooling efficiency, while reducing the amps used to do so.

Here’s how it works: The controller monitors your engine temperature via the radiator, therefore providing the most accurate reading for your cooling system. Using soft start technology, fans ramp up slowly, which eliminates harmful AMP spikes. The unit will continuously monitor your engine’s temperature and operate the fans at the optimum fan rate as needed between 1 to 100 percent. The net result: The electric fans often only run between 40 to 60 percent to keep your engine cool. Additional benefits include reduced fan speeds, which means reduced fan noise, which tends to compete with that sweet sound of your engine!

To put this all in a nutshell, Derale Performance has become a trusted name in automotive cooling solutions and that’s simply because their products work and work well. In addition, their customer service is topnotch and dealing with them brings back the old-school days when companies put service before the sale. So, spare yourself the headache and go with a brand that’s built its reputation as a trusted leader. And if that’s enough to sell ya, then go and support a company that’s located right here in East Los Angeles, the birthplace of lowriding and also the birthplace of Derale Performance.