Newsletter
Sign Up today for our FREE Newsletter and get the latest articles and news delivered right to your inbox.
Home » Toyo Tires’ Open Country M/T Radial Tire – The Tow Rider 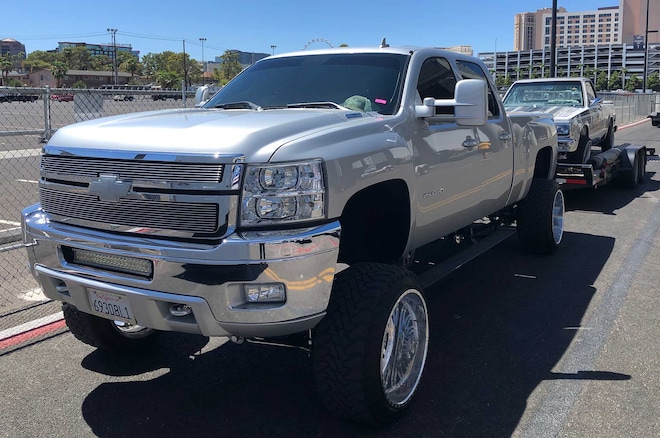 Many moons ago, the pickup truck was nothing more than a humble workhouse designed for hard-working common folk. It was a mode of transportation, a vehicle reserved for laborers, and a vehicle designed strictly for utilitarian purposes, but the times have changed and so has the role and prestige of trucks. While the pickup truck still remains a vital means of transportation for many blue-collar workers, it has also become a status symbol and a secondary toy for many. Call it the new family vehicle, the toy hauler, or the gas-guzzling pig that loves to shine, the bottom line is trucks are more popular than ever and have even become a status symbol driven by a multitude of folks including farmworkers and farm owners alike.

In essence, trucks have essentially become the new SUV. They carry precious loads, and when they’re not hauling our families, many see action as toy haulers. Now when it comes to hauling, there was a time when it didn’t matter what your truck looked like—so long as it had enough power to pull—but those days are long gone. Our trucks are like secondary babies and we want them as pretty as the toys they haul. Take for example this one here. It’s a 2005 Chevrolet 2500HD, and while some like to call it the “The Great White,” we refer to it as our “Tow Rider” and it’s been the honorary hauler of some of the most legendary lowriders in the circuit as well as some of the craziest boats to hit Havasu.

So, when it came time to change the tires, we decided to go with Toyo Tires’ Open Country M/T Radial Tire. The units we ordered measured in at 37×13.50R24 and at first glance, the tires are simply a visual orgasm. They are the best-looking low-profile off-road tires I’ve laid eyes on, but behind the fashion is function that can’t be beat.

After putting a few thousand miles on the tires, we put it through a battery of tests including city driving, long-distance hauls (with and without loads), and not only was the ride quieter but much smoother and the increased gas mileage was a definite plus. Additionally, I felt improved vehicle response, and the one thing that truly stuck out was the tires capability to hold up to really heavy loads. With tires I’ve used in the past, an extreme load would collapse the sidewalls, but with Toyo’s Open Country, they simply handled the load without collapsing—and that has much to do with the high turnup, three-ply polyester construction.

As far as tread is concerned, the tire features scalloped shoulder blocks which gives the tire that good gription (a term we use to describe grip and traction) while aiding in mud and debris ejection. In addition, the over-the-shoulder tread helps to provide traction and delivers improved off-road handling in hard turns. In all, we can word this up like a sales pitch from hell, but the bottom line is the tire outperforms and outhandles anything else we’ve tried in the category. So, as we always say, “Catch a budget and break bread” because the Toyo Open Country are well worth the investment.

Tech & How-To What’s The Most Important Car In Your Collection?

Regular tire maintenance is a must, and the brands you choose can and will make a world of a difference when it comes to performance, gas mileage and road noise.

An affinity for classic cars is what brought the Millan family together, and now their sons, Rafael Jr. and Johnny, are hooked and carrying on the tradition.

When 45-year-old Dwight Brooks looks back on his life he wonders how he made it to where he is today.

For Joe Martinez, lowriding is more than a way of life, it’s a family affair. It’s what drives them and what keeps them together.