Newsletter
Sign Up today for our FREE Newsletter and get the latest articles and news delivered right to your inbox.
Home » Repairing Die-Cast Parts 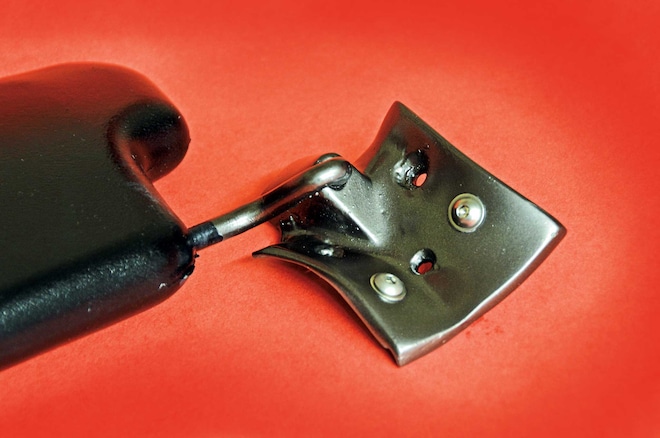 Pot metal, white metal, die-cast zinc, monkey metal, call it what you like, these low-melting point metals have been used by automotive manufacturers for years, casting everything from hood ornaments to horn buttons. An interesting side note, the term “pot metal” can be traced back to early automotive manufacturing where scraps of non-ferrous metal were gathered and deposited into one pot to be melted and used for casting.

The reason ferrous metals are not used in pot metal relates to the desire to keep the melting temperature low. Zinc melts at 786 degrees F, which also minimizes energy costs in the casting process. There is no metallurgical standard for pot metal but the blends generally include zinc, aluminum, magnesium, cadmium, copper, and tin in varying degrees. While the low melting points are great for casting, pot metal also has a low boiling point, which can lead to air bubbles in the casting that show up later as pitting.

The structural integrity of pot metal means it is generally used for parts not subjected to high stress. Like most things, age is not pot metal’s friend. As pot metal ages it is prone to oxidation and corrosion both from external contaminates and from internal corrosion. With age the metal can actually change shape, become brittle, and is prone to cracking. And so it is no small wonder vintage auto buffs have often found themselves staring at a broken piece of pot metal. We recently encountered just such a dilemma.

Pot metal is not easily soldered or welded (although we will be looking at soldering in an upcoming issue). A common method of repair is to send the broken piece to a high-quality chrome plating shop for repair. They will copper plate the piece and use the copper as a base to solder the pieces back together, often followed by typical chrome plating. This is the smart way to repair a die-cast piece if chrome plating is involved.

But many pot metal cast pieces are painted, in our case the flange on our 1957 Ford Ranch Wagon sunvisor had snapped in half. So we had two pieces that needed to be reunited.

Modern epoxy glues are pretty amazing, and the strength of these products have come a long way, but they are still not strong enough to simply “stick two pieces together” if the part is going to bear any type of load. Since the weight of the sunvisor is on a long lever and there is some rotational force on the cast flange we decided to make a steel backing plate and use epoxy to join the now three pieces together (two broken die-cast pieces, one steel backing plate).

We formed the backing plate from 22-gauge sheetmetal, intentionally thin, making it easy to work yet still strong enough to support the visor. First we glued the two pieces together with JB Weld, available at your local hardware or auto parts store. Then we carefully formed the backing plate, taking care not to exert too much pressure on the glued piece as it would most certainly break again. After we formed the piece properly we marked the three holes for the sheetmetal screws that hold the flange to the car and drilled the proper size holes.

With the backing plate formed we lightly sanded the die-cast flange and the new steel backing plate. A quick wipe down with Summit Wax and Grease Remover ensured there was no oil or grease on the mating surfaces. Next we took three 10-24 bolts and put a coating of grease on the threads of the bolts and set them aside.

Finally we mixed up a puddle of JB Weld and applied a liberal coating to the die-cast flange and the new steel backing plate. Wear Nitrile gloves for this process as epoxy glue sticks well to your hands too. Once each piece was coated with epoxy we pushed the steel backing plate into position on the back of the flange. Then we inserted the three bolts through the holes and carefully tightened the nuts to pull the two pieces together. Excess epoxy will squeeze out of the sides of the piece; simply wipe it smooth with your gloved hand. We allowed the piece to cure for a full 24 hours before we removed the bolts. The greased threads made removing the bolts simple as the epoxy did not stick to the threads on the bolts.

After the epoxy had cured we used a small air grinder to trim down the epoxy on the front of the flange. Next we used sandpaper, beginning with 80-grit and working down to 400-grit to smooth the repaired seam. We filled low spots with more JB Weld as we felt the epoxy would lend more strength than using body filler.

With the surface roughed into shape we reinstalled the three bolts and marked the flange for two new holes. We decided that while the epoxy probably would be strong enough it couldn’t hurt to have two permanent 10-24 bolts holding the original flange to the new sheetmeal backing plate.

After the surface was smooth we sprayed several coats of automotive primer on the piece and sanded it with 400-grit wet paper. Finally we mixed up a small amount of the original interior paint and used our Iwata airbrush to spray the final finish with automotive single-stage paint. After the piece dried it was installed using the original sheetmetal screws and we are pleased to say the sunvisor bracket is holding up just fine.

Of course after repairing the piece it was brought to my attention that reproduction sunvisor brackets are available from Ford parts houses like Bob Drake and Dennis Carpenter Ford Restoration Parts at affordable prices. Of course that would be way too simple for me, and a winter weekend spent repairing the piece brought my estimated salary to around $3 an hour, which I dare say is about average for working on hot rods. The good news is similar repair practices can be used on pieces not available in reproduction form.

Our 1957 Ford sunvisor bracket broke after only 60 years of service. The crack ran through the center hole and up around the visor rod leaving us with two pieces. The first step in our repair involved gluing the two pieces together with JB Weld.

On the back side of the bracket we flattened the JB Weld with our finger for a smoother seam. We always wear Nitrile gloves when working with adhesives.

The epoxy bond on the crack is not strong enough by itself so we set about making a sheetmetal backing plate. First step in that process is making a paper template.

We transferred the shape of the paper template to a piece of 22-gauge sheetmetal. The thin sheetmetal should have ample strength and be easy to shape; after all we’re repairing a sunvisor mount, not building a motor mount.

Since the two pieces are just bonded along the crack we didn’t dare try bending sheetmetal over the mounting flange. We used a profile gauge (available from Summit Racing) to get the proper contour of the bracket.

The neat part of a profile gauge is it gives you both a male and female shape to work with; in this case we would be working with the female profile.

After a brief search in our metal pile we discovered a nice piece of stainless steel tubing with a radius similar to the back of our broken bracket.

We used a body hammer to form the radius of the sheetmetal around the pipe, checking the profile with the shape of the broken bracket as we bend.

After achieving the proper radius we bent the two upper tabs with a pair of pliers to conform to the bracket until we were satisfied with the shape.

With the new backing plate taped in place we marked the three original mounting holes, again work carefully with the original piece to ensure you don’t break the epoxy bonded seam.

After drilling the three 1/8-inch holes in the backing plate we bolted it to the back side of the bracket using three 10-24 bolts. Gently tighten bolts, being careful not to break the die-cast piece in the process.

With the pieces bolted together we used two pairs of pliers to squeeze the 22-gauge sheetmetal into the recesses of the original bracket. The thin sheetmetal stretches and conforms easily.

With the final shaping done the parts were unbolted, sanded, cleaned, and covered with a layer of JB Weld. After greasing the threads on the 10-24 bolts we bolted the two pieces together, squeezing the epoxy between the backing plate and the original bracket and wiping off any excess that squeezed out in the process.

After allowing the JB Weld to cure overnight we removed the three bolts. Greasing the bolts made removal easy as the epoxy did not stick to the threads. At this point the bracket is strong.

While the backing plate was now bonded to the bracket we decided to add two 10-24 bolts, one on either side of the original crack for extra strength. We marked and drilled the required holes.

After sanding the excess JB Weld off the back side it was basically finished.

We used another layer of epoxy to act as filler on the front side feeling the epoxy would lend more strength to the finished piece than standard body filler. We first sanded with 80-grit and worked down to 220-grit sandpaper.

We applied several coats of automotive primer to the surface and sanded the piece first with 320-grit followed by more primer and a finish sanding with 400-wet sandpaper.

We purchased this Revolution Series Iwata airbrush (PN AST-4247) from Summit Racing. The gravity feed airbrush is a huge improvement over our old airbrush. We also ordered the vinyl air hose (PN AST-4012). Armed with our new airbrush we laid down several coats of automotive single-stage paint.

After the paint dried we installed two 10-24 stainless steel button head bolts and washers to complete the repair. We were pleased with the end result and the sunvisor is now back in the car working perfectly.