Newsletter
Sign Up today for our FREE Newsletter and get the latest articles and news delivered right to your inbox.
Home » Evapo-Rust: The Super-Safe Rust Remover 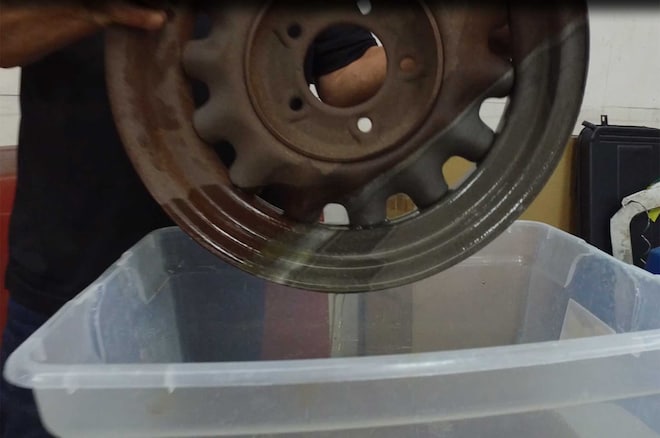 Do you have old rusted parts that for whatever reason you can’t bear to throw out? If so, try cleaning them up with some Evapo-Rust.

Evapo-Rust is the number one non-toxic rust remover in America. It is an environmentally safe, waterbased product that can clear away rust in minutes. Why spend money on special tools or on professional metal refinishing and cleaning when Evapo-Rust can do the same job without any scrubbing, sanding, mixing, sweating, or babysitting, like other rust-removal methods. In fact, unlike other commercial rust removers, Evapo-Rust not only removes rust but also provides long-term rust protection for un-rusted steel.

Evapo-Rust is biodegradable and earth-friendly. It is water soluble, and pH-neutral, and is non-toxic, non-corrosive, non-flammable, and contains no acids, bases, or solvents. Evapo-Rust is completely safe to use on metal and is not harmful toward other materials, such as rubber, plastic, wood, glass, PVC, most paints, most chrome, or non-rusted steel. Evapo-Rust is also completely safe on eyes and skin, which means using it will not require any gloves, masks, or protective eyewear. Evapo-Rust is reusable, with 1 gallon Evapo-Rust capable of de-rusting up to 300 pounds of steel.

To see Evapo-Rust in action, check out this short video of LOWRIDER Editor-in-Chief, Joe Ray using Evapo-Rust on an artillery wheel and on some other rusted items.

For more information on Evapo-Rust, check out their website at www.evapo-rust.com.