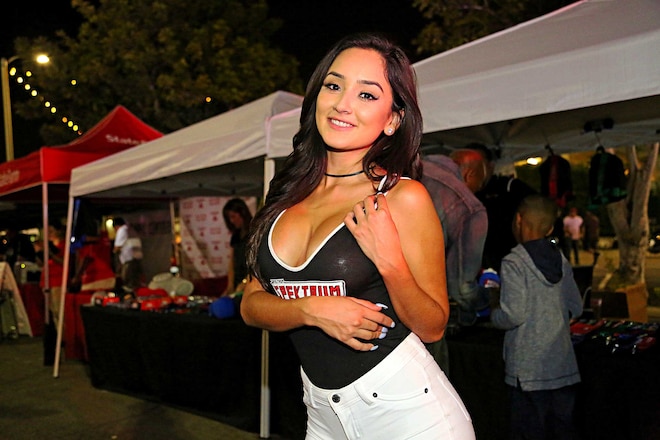 When I was younger, HIN shows were always popping. Huge lines to get in and once you were in you could barely walk because we were all packed in there like sardines. It’d been years since my last HIN show so when I saw the flyer for this San Pedro show, I thought I would go check it out. To my surprise, the show was free to the public and there were only a handful of cars at show. Luckily for me, I wasn’t there for the cars. I was there looking for potential models for LOWRIDER and there were plenty of models. As you can see, I was able to talk and snap a few photos of a couple of girls.

We first spoke to Hanna Ferraez (IG @HannaFerraez) from Huntington Beach, California, who was born in Mexico City and raised in Tustin, CA. She’s been in the states for 16 years and just got her citizenship a month ago.

LR: Did you get married to get your citizenship?

Hanna: NO! NO! NO! NO! NOOOO! [Laughing] I first got my residency when I was 13 and then took my test for my citizenship. It takes a few years to process everything but I finally got it and I very excited about it.

LR: How long have you been modeling?

Hanna: I started when I was 18 but I became a fulltime model last year when I turned 20. It can be a little stressful because I’m a freelance model and manage myself. It’s hard finding the right balance because I don’t want to over-book myself, yet I need to make sure I book enough shoots to get by and keep going to school.

LR: What are you studying?

The next girl we got a chance to speak to was Gladeez (IG @Gladeez_) who was born and raised in Santa Ana, California. Gladeez is a beautiful girl who I had never seen before but that’s because this is her first year in the modeling scene.

LR: So how did you get started modeling?

Gladeez: Selfies! I would just take selfies and post them on my social media and a photographer began hitting me up to model, so it all went down in the DM.

LR: How much modeling have you done?

Gladeez: I’ve done a few shoot from both sides of the camera. I’m a photographer too, so I know the difference between a good photographer and bad one.

The final girl we spoke with was Kayy Love (IG @KayyLove92) from Los Angeles who’s living in Korea Town. She had been modeling for about five years and then stepped out but made her way back this year.

LR: Why did you step out of the modeling scene?

Kayy: My situation at the time forced me to step out even though this is something that I love. When my situation changed, I got back into shape and came back.

Kayy: I love modeling and being featured in magazines. There was also a contest one time that I submitted to and I won, so that was fun too.

LR: You stepped out of the modeling scene once, what will make you step out of it again?

Kayy: I think when I get older and I’m ready to settle down and have my family but not right now. I want to keep enjoying what I do.