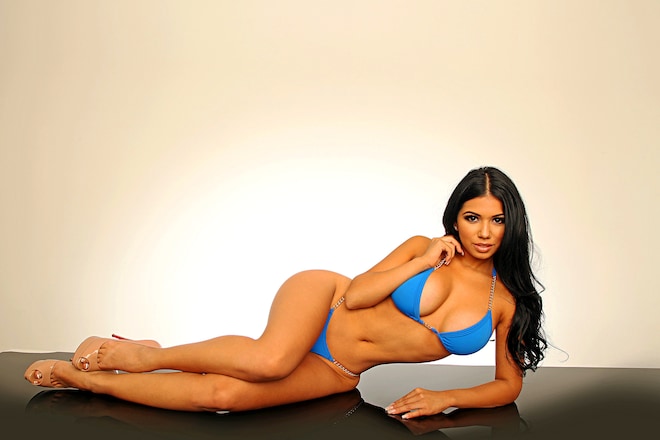 Hey you. Yeah…you. You ready to read yet?

Now that you’ve wiped the drool off your bottom lip and clicked “Save to Desktop” on your favorite pictures, let us introduce to a model that probably doesn’t need an introduction.

A bonafied hustler, model, speed demon and a damn gorgeous female, Amber’s been a global sensation ever since she hit the scene. In So Cal she became a household name almost overnight and till today she commands the respect so many others try to demand.

But what makes this humble, well rounded, model such a hit? Well there’s plenty. Aside from being known as a model that makes you want to pinch your helmet, Amber is also an avid street bike lover and stunt queen. Yes you read, that right, Amber can out stunt about a lot of riders out there and because of that she’s built a pretty damn big fan base. With both street cred and industry cred, she’s built a cult following of fans and it’s with good reason.

As I write this piece, I’m thinking back to the day I first met this half Mexican and Arab girl that loves tacos and how she became family to us over here at Lowrider Magazine but the girl really does have skills.

So how did she get into bikes? At 18, Amber vividly remembers the time some random guy pulled up to her on as street bike. As he approached, he popped a wheelie, blew her a kiss and that life-changing moment was better served for the bike industry that it was for the guy.

You see, the guy didn’t end up getting the digits, but his stunt created such an impact that shortly thereafter, Amber wound up getting herself a Kawasaki Ninja 250cc. As time passed, her passion for the bike life became evident and as her skills increased, so did her accompanying bike game.

Though she’s gone through plenty of bikes, she’s currently riding a KTM 1290 RC8R and the confidence in her skills has made her a global sensation. She’ll throw it up, wheelie and do all kinds of tricks and just recently she became the talk of town when she raced a GTR through South Beach…but that’s a whole other story.

But here’s the crazy thing, since moving her apple bottom to the Big Apple, her fan base has literally expanded from coast to coast. Since moving out there, she’s pretty much remained low key and focused on her daily grind, but the good thing is she’s never too big to reach out and call us when she’s back in town.

That said, enjoy these flicks from the last time she was around and be sure to follow her on IG.