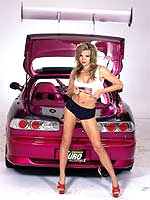 It’s always nice to see the ladies partake in the sport that most guys take for granted. Especially someone as talented and Mia Lopreiato of Las Vegas, Nevada. Talented because not only can she race a car that blows away many a male, but because she’s also a biologist working at the University of Las Vegas.

Both passions couldn’t be further from each other, but this special woman has no problem discerning the two from each other. When she purchased the ’94 Acura Integra the intent was pure and simple, she was out to race it with the rest of the pack.

Can you imagine the surprise of these guys (we’re assuming that all of the drivers were dudes) when they saw this young woman with her racing, revving GSR at the line? Talk about intimidating!

Well, after she dealt with her need for speed, Mia took the Integra 180 degrees in the opposite direction and customized it to compete with the heavy hitters on the import show circuit. Well, when we first spotted it at the 2001 SEMA in Lite Glow’s booth we knew that we just had to get it into the next issue of Euro. A few questions along with some quick calls on the cellular phone and we were off and running.

Paint and Body:
The Integra was taken over to Dezired Auto in Las Vegas where “Bugs” and Jose did the car up in a combo of House of Kolor candy pink, maroon and fuchsia. The finish goes over a JDM Type R front conversion kit, M3 mirrors with a aluminum rear wing and Lite Glow Industry accessories thrown in for good measure.

Audio/Video:
Mia had Tony and Ty of Car Toyz in Las Vegas design a system that would do her Acura justice. So the two combined forces to fabricate the rear of the car to showcase the Phoenix Gold amplifiers and X-Max subwoofers. The also installed Momo Polk tweets and mids, while a Pioneer 7300 DVD unit handles the entertaining chores for both driver and passenger.

Interior:
The was rolled to San Gabriel, California, where the crew at Apollo Interior Trim Works covered the Sparco Tarino seats in fuchsia vinyl with inserts done in maroon suede. The rest of the interior was also done up in fine fashion as was the cosmetics of the audio portion of the interior. Other hot items include a Sparco steering wheel, Auto Meter gauges, AC Autotech dash gauge cluster and GReddy shifter. A six-point Auto Power roll cage, Lite Glow neon and strobe lighting were added for extra accents.