Newsletter
Sign Up today for our FREE Newsletter and get the latest articles and news delivered right to your inbox.
Home » Vernon “VMax” Maxwell – Ultimately OG 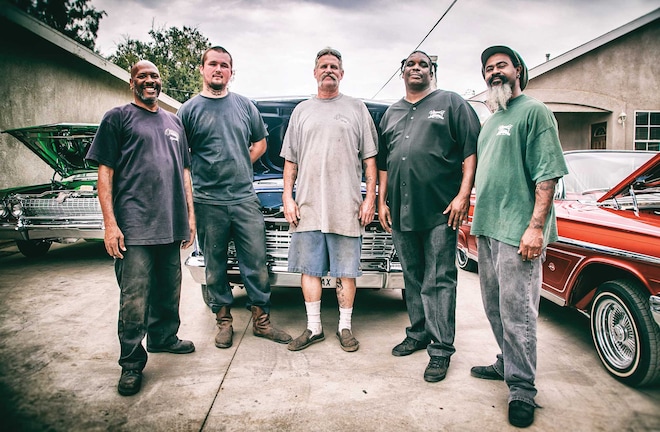 It’s 1978, the once decrepit Hollywood sign just received a million-dollar renovation. The Los Angeles Dodgers just won another National League pennant, and a young Vernon Maxwell sits at Churches Chicken watching the lowriders go by. For most of you who have been lowriding long enough, you know exactly which Churches I am referring to. VMax sat watching some of the top car clubs cruise, such as the Individuals and Stylistics. But little did he know that he himself would eventually become one of the lowriding community’s most influential car builders and trendsetters.

“Southside car club always set the bar high,” says VMax, “and I tried to get there with the first car I built,” which was a 1964 Chevy Impala hardtop. “I was always into hoping,” says VMax. And standing at a menacing 6 foot, 7 inches, after a few hits of the switch and few bumps on his head, he realized that perhaps a convertible might be the better way to go. Build after build, VMax would drive to the shows, and event after event you would see VMax drive away with the First Place trophy. “It was my ’63 Chevy “King of the Streets” that really put me on the map. Soon my phone was ringing off the hook with people wanting me to fix up their cars. I found myself at photo shoots with Ice Cube, Mack 10, The Red Hot Chili Peppers, and Gwen Stefani, just to name a few.”

Riding the wave of popularity in 2004, the idea to put in a new LS engine with two carbs and stroker (something no one had done before in a lowrider) was first thought up. These days, VMax can be found at his shop, Ultimate Hydraulics in Norco, California. He is usually surrounded by the extensive “his and hers” collection of Chevy Impala convertibles that continuously grace the covers of LOWRIDER Magazine.

He specializes in creating and displaying his full custom cars with his signature LS engines and hydraulic setups for a long list of celebrities, such as Dr. Dre, Lil Jon, and Gene Simmons of KISS. His work can also be seen in the soon to be released NWA movie, Straight Outta Compton. He boasts a list of clients from St. Louis all the way to the Carolinas. With a 1961 Chevy dubbed “The Last One” soon to debut, you can bet VMax is poised to change the game once again.

Ultimate Riders always strived to be the best, just like me. It was the only choice.

What’s the biggest change you have seen in lowriding?

Back then we would drive to the shows, take your trophies, and ride back home. I wish we would get back to real lowriding.

What’s the biggest change you have seen in the hop game?

All the weight they use now has changed everything. These days it’s just a balancing act, the little tricks we used just don’t cut it anymore.

What do you see for the future of the sport?

It is here to stay. It has its seasons, for a while there everyone wanted to build a Harley and it seems its stronger than ever.