Newsletter
Sign Up today for our FREE Newsletter and get the latest articles and news delivered right to your inbox.
Home » Coloring the Lowrider World in “Tropical Glitz” 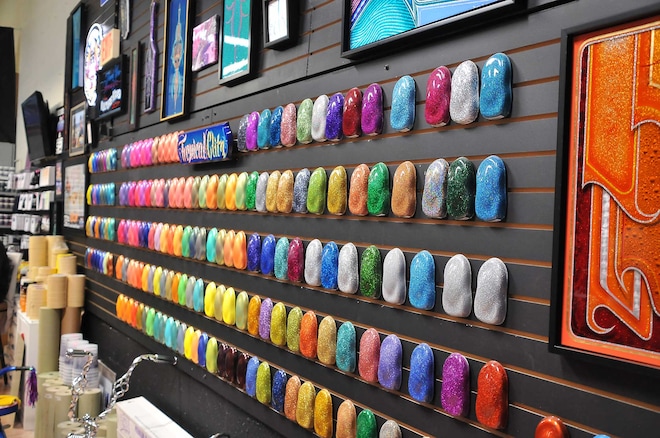 What started as a side job to generate extra income to pay for his son’s medical bills has since turned into a lifelong dream and passion for Manny Martinez, owner of Tropical Glitz. “Cars have always been a big part of my life,” says Manny, “but the idea of selling custom paint and metal flakes was never something I thought I would make a career out of.”

The dream began in the summer of 2015, when Manny Jr. was given a grant to receive therapy at a gym that services people with spinal cord injuries and other forms of paralysis. It was after six weeks attending the gym that Manny and his wife noticed positive changes in their son. They knew that this was something their son needed to do, but the cost was concerning to them. “Manny has always been one to dream and go after those dreams no matter what it takes to make them a reality”, says wife, Diana Martinez, “however, when he came to me and asked what my thoughts were about starting a Metal flake business, I literally thought he was insane.” Well, Manny followed his dream and after 3 years of carrying the load of managing 2 full time jobs, he decided to take the biggest risk of his life and quit his job to focus on growing Tropical Glitz.

Manny began running the business out of his home but quickly ran out of space and moved into a warehouse where the business has grown significantly. What began as a business providing 10 metal flake color options has grown into a laboratory that creates unlimited color products today. Tropical Glitz carries over 100 custom metal flake colors as well as custom candy paint, pearls, and anything that is needed to customize a car’s finish. Manny takes pride in what he does and in those that work alongside him to make Tropical Glitz a successful company. From his employees that work directly with him day-to-day, to his sponsored artists and customers that help showcase the quality of Tropical Glitz products through their craftsmanship.

One of the key factors of Tropical Glitz’ growing success is Manny’s extensive knowledge of paint and all his years of experience in custom painting. His passion for cars began in 1997 when Manny began his painting and customizing with model cars. Years later, he used what he learned from building scale models to customize actual cars and lowriders. That love for custom painting has been Manny’s hobby and passion ever since.

Features A One Stop Lowrider Garage