Newsletter
Sign Up today for our FREE Newsletter and get the latest articles and news delivered right to your inbox.
Home » Lowrider Magazine’s Top 5 Convertibles of All Time 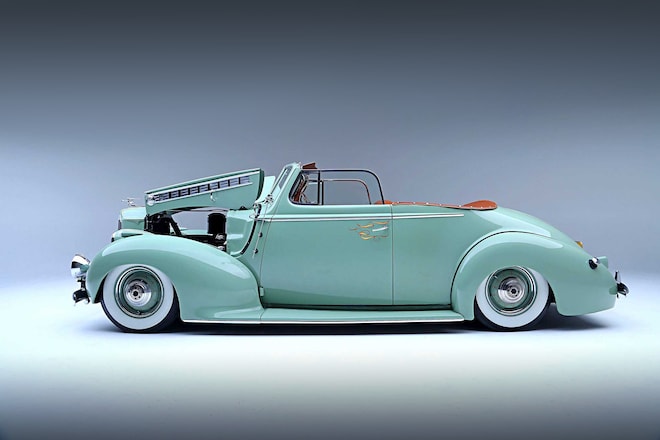 After making it through a very rough 2020, you blinked, and just like that it’s already March. That means those summer vibes are just around the corner and nothing welcomes warm weather like a classic convertible. With that said, we put together a list of the ‘verts you searched for, viewed and shared with one another the most over the last decade and broke them down for you. We also included a link to the original features so you can get an even closer look!

When a car and its potential owner are meant to join forces, things often have a funny way of working themselves out. Bob Vizcarra of Old Memories ELA found this ’40 Packard on eBay and put in a solid bid but in the end, lost out to someone else. As it turns out, that “winner” wasn’t planning to complete the purchase and the seller reached out to Bob directly, they worked out a deal and boom, his Chevy collection was joined by his first dive into a Packard build.

With his brother’s help, the car’s lengthy history revealed itself in the form of Bondo and various fixes which were all sorted out and the body was razor straight before the unique Fiat Lounge mint green paint was laid down. A 2-pump set up makes things right and the custom bronze leather interior is an attraction in and of itself.

What price would you pay for your dream car? For Leonard Miera, owner of this ’58 Impala, the price was 3 years, 200 grand and a pair of ’59 Impalas. After selling off both Chevys, he went all in on the project he calls “Eight Figures.” As you might expect, this build started off on the rough side of things and was in dire need of a complete restoration. With the car in the capable hands of Bert at the Chevy Shop, Leonard went on the hunt for NOS touches to add to his build-up.

Once the factory restoration was completed, the feeling wasn’t quite there so Leonard brought it right back to Chevy Shop to modify the suspension in order to get the car to sit low. A custom exhaust was built for a little extra grumble and finally, a custom trunk mural was laid down. The result is exactly what Miera wanted and was well worth the price.

#3 Ford Roadster Deluxe “Because New Cars Have No Soul”

This ’38 Roadster has seen it all and gone through multiple changes throughout its life. Originally from Argentina, the car started life in right-hand drive configuration but its previous owner, having replaced the frame due to rust on the original, converted it to the more familiar left-hand drive layout. The hot rod appearance would soon be altered as the chassis was Z-notched, the back seat deleted, an additional 12-in., give or take, was added to the trunk and the top was chopped, giving this Ford its longer, sleeker look.

Kurt of TK Classics took the bodywork honors and sprayed the Roadster in House of Kolors black that’s contrasted by a fresh burgundy interior treatment by Lyndis Upholstery. A 383 stroker with an Edelbrock intake manifold pushes power through a 700R trans and as much as you love this build, it was sadly sold not long after being photographed and lives in Japan now. Three continents and multiple iterations – this car has some stories to tell.

This ’58 Impala, not surprising, made the top 5 most popular Impala features list and just one look will tell you why it was such a smash hit with Lowrider fans. The car was found in San Diego where it had changed ownership in its original condition time and time again, but never actually left the southmost part of California. When Ryan Gamboa took ownership, he had huge plans and focused on a complete, ground-up build – a first for the longtime lowrider enthusiast.

Admittedly too ambitious in the beginning, what he originally thought would take about 6 months to complete, actually took 4 years. With absolutely no corners cut, the “.58 Caliber”, which features of a one-off, belt-driven hydraulic system designed and created by Hoppo’s, is literally one-of-a-kind.

#1 The ’59 Impala Mothership Has Landed

When you build something like Chris Mills’ Mothership ’59 Impala, people are going to take notice. The Self Made LAX C.C. member has a ridiculously long resume of lowriders, customs and exotics and this black and red ‘vert serves almost as a culmination of all of those past builds and automotive experiences put into a single masterpiece.

If you didn’t see it when it was featured in the pages of Lowrider years prior before the digital age completely took over, then you’ve undoubtedly spotted it on social media and it also landed the top spot once again when we pulled the numbers to find which Impala features had the most views last year. The numbers-matching ’59 is tastefully modded from front to back and the only regret that Mills noted ever having with his project was hesitating to cut the car for a proper hydraulic set up, which eventually came courtesy of MacGuyver/Stealth Motorworks.