Newsletter
Sign Up today for our FREE Newsletter and get the latest articles and news delivered right to your inbox.
Home » Top 5 Lowrider Features of 2020 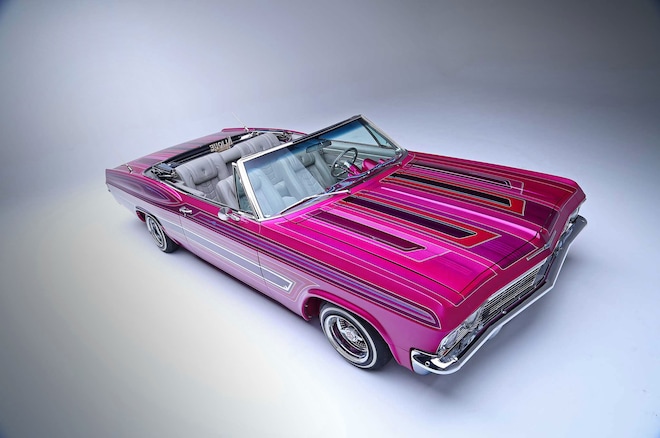 If you’re anything like us, you could use a break from hearing about how bad things were in 2020, and feel like it’s time to start looking at the positive aspects – like the top 5 lowrider features of the year, for example. In the midst of a global pandemic and all of the political craziness, the lowrider community showed up, as usual, and put in the work and dedication to finish some incredible builds. We were fortunate enough to cover some of them and put together a list of the most popular stories based on the number of views by you, the fans.

Full feature HERE
Anytime you put a celebrity name with a lowrider build, you’re going to see some increased interest, but put 2 celebrities together, like basketball hall-of-famer Shaquille O’Neal, and hot rod rockstar Chip Foose and you’re guaranteed to grab people’s attention. That’s exactly what happened with Shaq’s 1964 ‘Vert that received the Overhaulin’ treatment from Foose and his crew and this story was viewed more than any other in 2020 – by a huge margin.

The project started with a car gifted to the basketball legend by a close friend. As kind a gesture as it was, the body needed substantial work as Foose noted rust issues that had to be dealt with among other problems common on a car of this era. In addition, being north of 7-feet tall meant a new, longer steering column and adjusted seating position had to be fabricated and even the floor pan was dropped a few inches and included a custom pedal box in order to accommodate his massive shoe size.

Modernized with a Roadster Shop chassis and armed with an LS3 and 4L60-E transmission, the body was completely reworked and straightened before a custom dark grey was laid down and fresh interior brought it. You probably won’t agree with the wheel choice but can’t deny that Foose completely transformed this ’64 for the better. Get the full story HERE.

Full feature HERE
Lowrider builds are often identified by their paint and wheels but it’s the owner or builder’s personal details that make them so unique. With that said, this ’58 is overflowing with detail, inside and out. Displayed at SEMA, the automotive aftermarket certainly took notice and even those that have no interest in lowriders were floored by the one-off creation.

Takahiko Izawa is the president of a paint manufacturer in Japan, Rohan Co., Ltd., and he developed a 3D paint material that grants enough thickness to actually engrave patterns into the paint, rather than on it. The painstaking process covers the entire exterior, while under the hood, a spotless engine bay that’s been smoothed and painted houses a 350 small block and the engine bay is an attraction all its own. Get all the details on this amazing build right HERE.

Full story HERE
What do you do when you’ve got a pair of ’59 Impalas but your heart was always set on a ’58? If you’re Leonard Miera, you sell what you’ve got and track down that dream car that won’t leave you alone. Eventually finding this ’58 on the other side of the country, he brought it home and a much-needed restoration began with help from his good friend Bert at the Chevy Shop.

A 3-year transformation took place and included a ground-up resto, a list of NOS accessories that included an autrotronic eye, factory air-conditioning and a single piece bumper, along with others, as well as a one-off art piece on the trunk. It was a risky move, giving up on those ‘59s but in the end, Miera got exactly what he wanted. See the complete feature right HERE.

Full Feature HERE
Not only does Chino serve as the President of the Phoenix chapter of Klique C.C., but he’s also known for kicking ass…literally. A multi-time Muay Thai champion, Chino splits time between martial arts and maintaining this beautiful ’65. Of course, it didn’t start that way, having sat in his backyard for a few years while he was building his house, he finally picked up the project and never looked back.

With the help of his father-in-law, Fred, the two embarked on a decade-long build-up that includes suicide doors and trunk, which are automated using actuators that take demands from a remote control. The PPG Candy Magenta, highlighted by ghost, flake and pearl patterns will pull you in, and the layers of detail and clever touches will keep you staring. For the full feature, click HERE.

Full Feature HERE
After Johnny Martinez Jr. and his father found this Torpedo in rather rough condition, they teamed up to get it running again. Successfully back on the road, they felt it was missing far too many pieces and although it was fun to cruise, a complete revamp was in order – especially after getting motivated after attending the annual Good Friday cruise on Espanola’s Riverside drive.

A Camaro subframe and 4-link rear end were brought in and the small block 400 freshened up, all in Martinez Sr.’s garage. With multiple dead ends during the search for trim pieces, the father and son duo fabricated many of their own and with jet black paint laid down and B&M upholstery giving the interior an updated look, you can find both Jr. and Sr. cruising the streets of New Mexico together. View the entire feature right HERE.

Takahiko Izawa wanted his Impala to be a rare work-of-art so he created a special 3D-paint material that he could use on his Impala and engrave from bumper to bumper.