Newsletter
Sign Up today for our FREE Newsletter and get the latest articles and news delivered right to your inbox.
Home » Top 5 Lowrider Bombs of the Last Decade 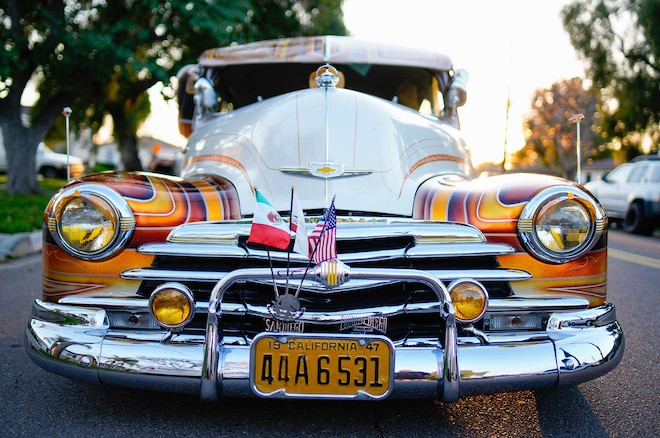 The lowrider bomb simply can’t be denied. A rolling piece of history that carries as much culture and style as it does classic vibes upon its shapely shoulders, every lowrider enthusiast has the upmost respect for a nicely built bomb. We put together a list of the features that you visited the most over the past decade and each of these is unique in its own way, with all five serving as perfect examples of how to do things the right way.

Every inch of this showstopping ’48 Fleetline has been restored or reworked in one way or another and you won’t find a single flaw on it. The Candy Magenta and black paintwork is second to none and the mural work represents the ladies of Hollywood past with greats like Liz Taylor, Rita Hayworth and more – earning the Chevy the nickname “Old Hollywood.”

The details don’t end on the exterior, either. Step inside and the custom stitched seats, panels, and upholstery combine with original elements for an old world feel, albeit with modern materials. Crouch down and look under the chassis and you’re met with more fine details and custom tailoring that owner Martin Madrigal and his sons, Martin Jr. and Angel, added to the mix for a truly one-of-a-kind bomb build.

Love at first sight is all too real for Jose Ceballos, owner of this classy ’41 Special Deluxe known as “Mi Bombita.” Walking home from school, he spotted a lowrider stopped and sprinted over to get a closer look. Asking the owner what it was, he was handed a copy of Lowrider Magazine and that was it – he was officially hooked on lowrider culture.

Years later, after completing a 1991 Blazer lowrider build, getting married, and thinking about what was next, he and his wife crossed paths with a Chevy bomb. His wife mentioned that she knew of a friend selling one and they went straight to that friend’s house to see it in person. Deal done, Jose drove it home and tore it down, putting his ’41 through a complete ground-up build with custom touches from top to bottom.

More of the Most Popular Feature Story Lists:

Henry Llamas’ love for lowriders started like so many others – at a very young age. So young, in fact, that he was just a kid and channeled his passion for customs through slick model builds. Eventually, he moved on to lowrider bike builds and even started a club, “Diego Style b.c.” to teach kids how to customize their bike’s and help keep them out of trouble.

When he was old enough, lowrider building began and after completing an Impala SS, he was ready for a new challenge and that’s when he found this Fleetmaster. He rebuilt the engine, painted the car 3 different times and the list of custom additions is a mile long, but Henry’s creation, dubbed “Diego Style,” is truly a result of his lifelong passion for lowriders.

Joe Demny, an accomplished pinstriper and welder, is the one you call on for that custom touch to your lowrider build. But what many forget is that the urge to create goes much further than just working on other builder’s creations. A dedicated car enthusiast himself, Joe was looking for a new project when he came across this German Helmet and made a deal, sight unseen, and brought it home.

At one point, as he worked on an electrical issue, Joe decided to just start from scratch, and he and his sons tore the car completely down. Notching the rear and building a custom hydraulics set up allowed the car to get down to a more suitable height and Joe did all of the bodywork himself before having some custom mural work added. In the end, after all of that hard work, “Capone” was born.

When you’re dead set on your dream car, there isn’t much on earth that will keep you away from finding it and making that purchase. For Ted Barela, he put in the work to earn the funds then put forth the effort to search high and low until he found this ’47 Fleetline. The fact that it was over 900 miles away wasn’t much of an obstacle at all since he had a feeling this was the one. He made the trip with a trailer following behind, took one look at the car and knew he’d made the right choice to make that journey.

A full restoration later, the Espresso Brown and Dune colored masterpiece known as “Chimayo ’47” was born and debuted. No corners cut, this Fleetline is picture-perfect and has provided endless memories for Ted and his family. Of the Bomb features we’ve showcased over the last decade, Chimayo ’47 holds the title for the most story views.