Newsletter
Sign Up today for our FREE Newsletter and get the latest articles and news delivered right to your inbox.
Home » Top 5 Greatest Chevy Impala Lowrider Builds of the Last Decade 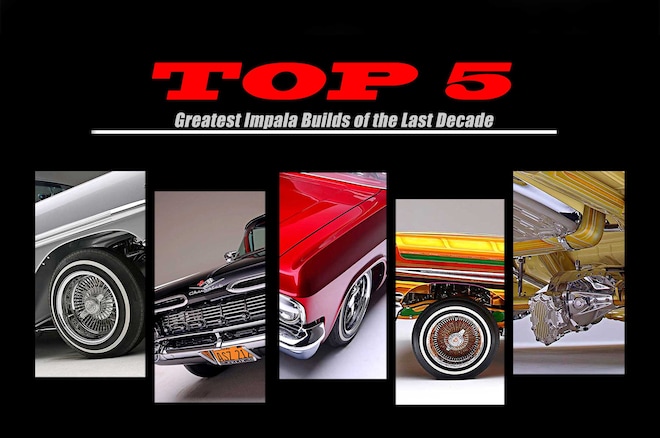 The five Chevy Impalas listed below are the result of a rather nerdy bunch that pick apart website and social media metrics, look over endless numbers and compare notes all in the name of making sure Lowrider.com and its associated social media outlets are completely maximized, with content reaching as many long-term and newly discovered fans as possible. Digging through the analytics and plenty of variables, one thing is for certain: you love Impalas.

Convertible, hardtop, late ’50s, mid-’60s, it doesn’t matter, the Impala features that have long graced the covers and countless pages of Lowrider print, which now live entirely on the digital platform, reign supreme. Being that we’re well into 2020, we figured it would be the ideal time to gather a list of Impala features over the last ten years that you, the fan, decided to click and read most frequently.

With that said, here are the top 5 Chevy Impala features most commonly viewed over the last decade.

When a cover car owner carries a resume of past and current vehicles that include Phantoms, Bentleys, Lamborghinis, Porsche and 4 classic Caddys, you can be rest assured they know cars inside and out. For Chris Mills, his ’59 Impala ‘vert is much more than just another set of keys on his wall. He states, “there’s no feeling like being in a lowrider. The way it tips, the attention it gets is unreal. Honestly, the exotic car scene is cool and all, but lowriding has a camaraderie that’s unreal. You’ll hear people say it’s not a hobby, it’s a lifestyle, and it’s true.”

After a short stint on air suspension, he gave in to the temptation of having his special ride cut out, and so he handed his ’59 over to Mac Guyver at Stealth Motor works to work his magic. Along the way, a Stroker 383 made its way under the hood and the Axalta single-stage black “Mothership” was ready to hit the streets once again. See the complete photo gallery of this sinister black on red convertible right here.

Having owned his first lowrider at the age of 18 and after building over a dozen more, Ryan Gamboa was banking on a 6-month turn-around for this San Diego-based ’58 that he found. He soon realized that greatness comes at the expense of time and in this case, the cost was 4-years.

Over that period, Hoppo’s would step in to build a one-off, belt-driven hydraulic system and Top Notch customs took care of the Iconic ’58’s exterior appearance.

An uncommon color for a ’58, the silver, complete with a single-color trunk mural by Fonzy and endless engraving, offers the perfect amount of visual contrast. You can see the entire photo set from our studio shoot right here.

Armando Flores went from building model cars to building this spotless ’65 fastback. So precise, so incredibly detailed were his scale model creations that Flores earned worldwide recognition and in 1997, earned Car Model of the Year. That passion would lead to Flores founding the Masterpieces Association to bring builders from around the world together to share their work.

Wanting to apply his attention to detail to something he could drive, he sourced out this ’65 SS and over an 11-year stint, pieced together “City of Angels.” If you can get beyond the picture-perfect HOK Candy Ruby Red exterior, there’s a Blue Print Lowrider Series 350 crate engine that awaits from the engine bay, and while inside the retro style interior was created by California Upholstery.

The trunk features a Homies Hydraulics set up that allows the body to lay down on the ground with Premium Sportway tires and 100-spoke Dayton’s that tuck under the fender wells. View the entire photoshoot gallery right here.

Winning 10 sweepstakes titles in 3 different categories and bringing home multiple 2nd and 3rd place finishes with various builds isn’t a common occurrence, but that’s exactly what Engineer Chris Roark managed to accomplish with his long list of heavy-hitting builds. Dig a little deeper and you’ll find that his ’57 Bel Air earned him Original of the Year, his ’58 Impala hardtop has three-time Traditional of the Year awards under its belt and his ’58 Impala Hardtop boasts 3 consecutive Lowrider of the Year awards.

This particular ’58 Impala might not have even been in the running for its 2018 Lowrider of the Year title, or even a full blown build at all had it not been for an accident that completely totaled his ’58 hardtop on its way home from winning its third title. The incident was devastating, but like any dedicated builder, the only course of action was a build to not only replace what was lost, but to top it entirely.

Being that Roark purchased this Impala a few decades prior and left it completely untouched, it was the perfect canvas to create with. The four-year build-up included the talents of Steve Santos at Tekni Kolor Kustoms who laid down Sunshine gold and pagan gold candies, followed by the multi-color patterns that span the body, firewall and interior. Sammy De Leon blessed the project with murals under the hood and trunk lid, but he also touched the door jambs, wheel wells and the backside of the driver and passenger seats. The custom four pump set up is incredibly detailed and comprised of over 90 individual pieces, and you’ll find a massive photo gallery with over 100 images showing every detail right here.

Before Eric Wisterman pieced together this highly detailed yellow & bad masterpiece – which earned him The Excellence Award and caused a firestorm on the internet due to it not earning Lowrider of the Year – he built a ’63 that landed him Original of the Year for the third time back in 2010. Rather than retire on that note, he decided to start from scratch on his famed deuce.

Eric and his friend Atanacio tore the car down so that Pablo of Kandy-N-Krome would be free to apply his patterns before the body was removed and the frame could be molded. Alberto Herrera was then tasked to create murals inspired by the smash-hit series Breaking Bad. The process was so involved and time consuming that Eric actually had the painters stay at his home to maintain progress. Under the hood, along with the detailed murals you’ll find a 383-stroker that pumps power up to 500hp.

Inside, ’93 Lexus seats, along with the rest of the interior were completely reworked by 5 Star Upholstery to complete the yellow-on-yellow theme. Along with the Excellence Award at the Las Vegas Super Show, Best Custom and Master Builder awards at Houston Autorama, this sea of mellow yellow from end to end might sound too simple, but Eric’s build will completely change your mind on that, guaranteed. See the full gallery right here.