Newsletter
Sign Up today for our FREE Newsletter and get the latest articles and news delivered right to your inbox.
Home » Texas Barber Shop with True Lowrider Influence 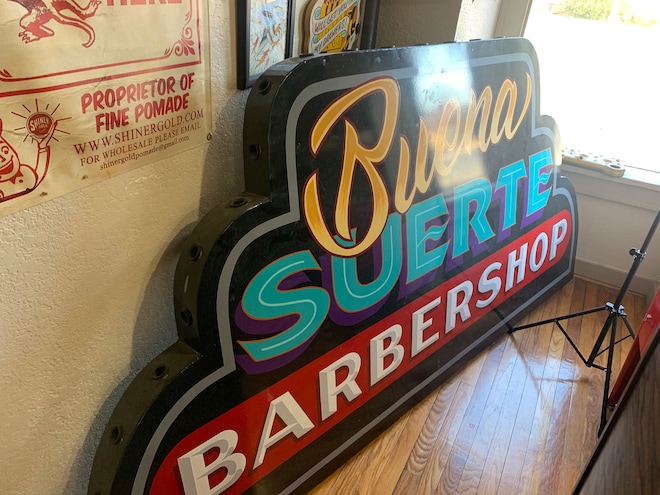 While we were at the 49th Annual Lowrider Tejano Super Show about a month ago, we visited with a local 50s-era style, lowrider-themed barber shop. Buena Suerte is located in Midland, Texas, and owned by Esau Ramirez for the past few years. Twenty five-year old Ramon Carrera, proud son of “Big Rick” and Juliet Carrera, is also one of the barbers who cuts and styles hair with a flair at the shop.

Ramon, who is currently working on a 1984 Caddy that belonged to his uncle Ray, an original member of the Taste of Latin car club, was born into low riding through his family’s upbringing. He grew up as a kid running around the halls of the Tejano Super Shows, admiring show cars like Las Vegas and Gypsy Rose, and some of the other classic lowriders from Taste of Latin, Lifestyle, Imperials, Techniques, Klique and of course his dads club, Old Memories.

When he was around 15 years old, his passion for lowriding started to kick in. He fell deeply in love with the music, the cars and the brotherhood, so he got into building model cars. Every weekend he would ask his folks to take him down to the Hobby Lobby so he could grab a few plastic kits. It kept a young Ramon out of trouble and it also helped him embrace who he was and where he came from.

His whole life he’s always been different amongst his peers, everybody around him was into video games, sports, and whatever else teenagers were involved in while he was into playing mariachi music, pin striping, and learning how to shoot candy paint. He admired painters and pin stripers like the Leal Brothers, Mario Candy Factory, Bugs Ochoa, Walt prey, and Nick Hernandez, hoping that one day he could paint like them. Growing up, he always wanted to be in the military to serve and protect. As life would have it, serving in the military didn’t work out as God had a different plan for him.  Barbering was introduced to him when he was around 16 when he met a gentleman named Esau Ramirez, his own barber. Ramon says, “he was this cool dude with a rowdy pompadour that was into led sleds and Hot Rods.”

This was a new world for Ramon and he instantly fell in love with his new surroundings.  Right out of high school he tried enlisting and that didn’t work out, so he was working in a warehouse at the time and hated it because for the first time in his life, he felt ordinary. Fast forward when he turned and went in for his usual haircut. He had no idea where his life was going at the time and Esau then told him the first barber school in their city was opening up and asked him if he was interested. Naturally he looked into it, and Esau went from being his barber, to being his mentor. For two years he worked a full-time job and went to barber school as well. Early on in his barber career, Esau told him that true barbering isn’t what you see on Instagram, it’s not fancy clothes or fancy clippers and that it wasn’t a trend – it was a trade.

Ramon now feels that being a barber is something sacred and as a barber in his community, he constantly sees different people from many walks of life. He cuts everybodies hair from small children to elderly men. “I cut from cops to outlaws, and everybody in between,” Ramon says. He’s his own community servant and the keeper of that community’s secrets. “When you step into my room, I want you to forget you’re in the middle of Texas.”

Even though you may not know about the famous Whittier Blvd cruising spot, for the time being, when you’re with Ramon you feel like you’re there. He wants you to feel the sights and sonds that are the spirit of lowriding and he wants everyone to understand that we’re people, and tthat we’re more than how movies and rap videos depict us. “There are so many nasty stereotypes about barbers and low riders with people often thinking of us as thugs or scam artists, people of lower class and gang bangers. I’m living proof that barbers and lowriders are not. I come from a great home and I was raised by parents who live and love the lowrider culture. Barbers and lowriders are artists who protect culture and tradition.”  You can find Ramon on Instagram at @el_peluquero_ramon.