Newsletter
Sign Up today for our FREE Newsletter and get the latest articles and news delivered right to your inbox.
Home » Speedy’s Metal Finishing 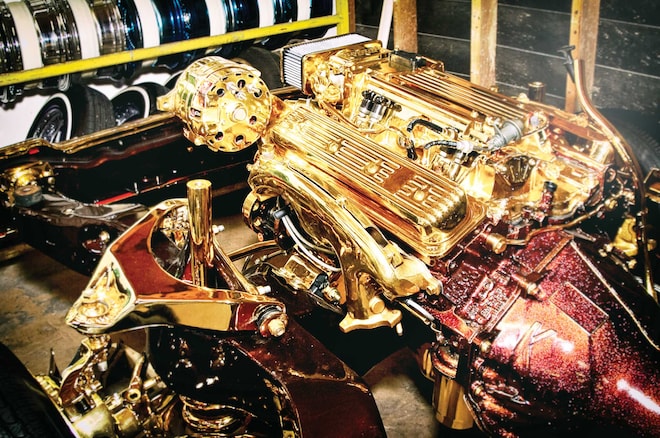 One part Sulfuric Acid and 100 parts Chromic Acid is in essence what most of us refer to as chrome plating, and since 1924 the recipe for commercial chrome has gone virtually unchanged. While the use of chrome plating has humble beginnings, coating items such as door knobs, jewelry, and small car parts, its presence within the lowrider community was not readily felt until the late ’80s when our competitive culture led each new car that came to a car show to be adorned with more and more chrome and gold finishing. While hot rod builders were painting over chrome bumpers and trim, lowriders were plating every bolt and possible metal piece found on their cars, accenting the colorful vibrant paintjobs of the day.

It was this environment that Luis “Speedy” Rodriguez would walk into when moving from Mexico in 1989. Speedy would soon find himself working at a local metal plating shop, which would eventually go out of business. Knowing he did not want to work for anyone else, and with a set of skills recently acquired, Speedy, one polisher, and one polishing machine became what is known as Speedy’s Metal Finishing. “I always heard customers complain about missing parts or parts not being done in time,” Speedy says. “I did not have a secretary or filing system at the time, so I had to get creative and find a system that worked for me.” Speedy says he knew this would be key to his success.

His son, Jonathan, would eventually join the team, who at 12 years old came on board when Speedy’s business was really starting to blossom. Within a few years they found themselves chrome plating some of the scene’s heavy hitters, like Los Angeles Car Club, Stylistics Car Club, Game Killa, Lifestyle Car Club, Krazy Kreation, and more notably plating the frame of LOWRIDER of the Year, an ’87 Cutlass Supreme RM Series, “The Big Payback.”

Along with having some of the industry’s top chrome plating, Speedy has steadily taken over the custom engraving market since the late ’90s when engraving became a quintessential part of most every lowrider build.

From chrome, gold, engraving, and polishing, Speedy has become the go-to shop for all of the top lowrider builders. These days his work is displayed on many of his Highclass Car Club members’ vehicles, as well his personal cars, like “Expensive Taste,” a Cadillac covered from top to bottom with custom metal finishing, along with a ’64 Chevy Impala that would end up on the cover of LOWRIDER.

“I am always on the scene,” Speedy says. “You will never hear about people asking for their parts; my reputation is everything, my quality speaks for itself. I will not plate anything unless it has been copper dipped.” There is only one way to find out, so visit Speedy and crew today for all your metal finishing needs.