Newsletter
Sign Up today for our FREE Newsletter and get the latest articles and news delivered right to your inbox.
Home » Rolando “Sleepy” Valdovinos’ 1980 Chevrolet Caprice 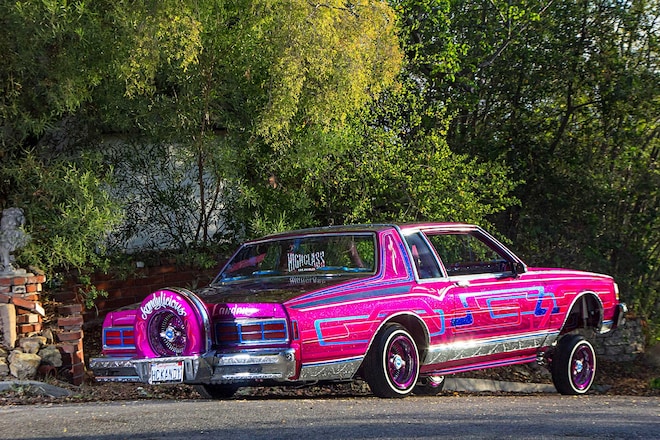 Before making its reappearance in 2006, the Chevrolet Caprice was one of the most popular fullsize sedans for over 30 years. From 1965-1996 several variations of this timeless classic were seen rolling down off the assembly lines. The ’70s and early ’80s would see a downsized version of its predecessor. It is this particular version that Rolando Valdovinos had dreamt about owning since his childhood. When the time finally came, he set out to find the right Caprice … one that would allow him to bring all those childhood dreams to reality.

The heart and soul of this project was placed in the hands of Clowns Customs. It was there that the 383 stroker would be completely transformed. No bolt was left untouched and everything was meticulously overhauled to sheer perfection. Once complete, Speedy’s Metal Finishing was left the job of chroming and engraving the vehicle’s metalwork, an Edelbrock intake, aluminum heads, and custom dual MagnaFlow exhaust were being bolted on.

Next stop was a visit to Tala Kandy where an old-school paint scheme would be laid down. The intricate patterns consisted of numerous overlapping designs of House of Kolor Candy Apple Red, Cobalt Blue, Oriental Blue, and several magentas. Manny’s Auto Art, along with Shinji Hara, would be brought in to tie it all together by adding miles of pinstripe lines and a mural of Rolando’s two daughters on the firewall.

With the custom 100-spoke wire wheels engraved, powdercoated and mounted onto 155/80-13 radial whitewall tires, it was time for Rolando, along with Clowns Customs, to install the one-of-a-kind hydraulic setup. His setup features a custom whammy tank, Adex dumps, and battery racks, all of which have been engraved and blown out. Once Tiny’s Kustom Sounds were done installing the Pioneer head unit and Infinity speakers, the last step in this vehicle transformation was left in the hands of Riding Dirty Upholstery. It was there that the team, along with G Rides, would shape and mold metal and fiberglass to create a custom center console, dash, and door panels. With that completed, it was time to wrap the entire interior in color tones and patterns, matching those found throughout the vehicle.

When asked why he went so wild on the build, his response was perfect as he grinned and replied, “I’m from Highclass Car Club, so you know this car could not be basic.” Then he followed up by saying, “Thanks to everyone who helped make my dreams come true.”