Newsletter
Sign Up today for our FREE Newsletter and get the latest articles and news delivered right to your inbox.
Home » Reborn in Thailand: 1957 Chevrolet Bel Air 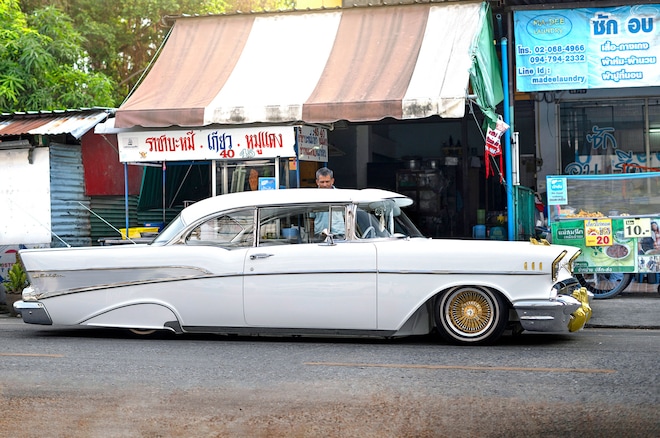 It’s no secret that lowrider culture, born in southern California decades ago, has worked its way beyond the U.S. and landed in various regions all over the world, but if there’s someone out there that isn’t convinced, then this 1957 Chevy Bel Air might be all that’s needed to change their mind. This restoration turned custom lowrider is the handiwork of Volcano Custom Thailand, a do-it-all automotive shop in the heart of Bangkok.

And when I say “do-it-all,” that’s not to be taken lightly, as it includes complete paint and body work, engine building, chassis modification, interior work, frame-off restos and just about anything else you can imagine. We found this shop thanks to Chad Burdette, a freelance photographer turned YouTube’r that moved to Thailand a few years ago and ever since, has been uncovering unique builds and shops throughout the entire country.

When Burdette visited the shop recently (You can view Chad’s video and cruise in the Bel Air right HERE.) one of the builds he found the group working was a bare chassis that would be mated to this 1950s body. Here’s the thing: the original body was destroyed and only the chassis could be salvaged, so Volcano Custom went ahead and created their own body…from scratch. No 3D molds or pre-made panels, it was hand-formed in metal, front to back, top to bottom, old school style, and in the end, it’ll be a complete build with no corners cut, all done in-house, of course.

But back to the Bel Air. What started as a restoration has turned into a custom lowrider that would fit right in at any Socal lowrider gathering and as you might expect, it didn’t come cheap. The shop’s owner, “Note,” explained that the car was extremely difficult to piece together with all of the parts being imported from the U.S. That meant not only sourcing them and waiting sometimes months for their arrival, but also dealing with heavy import duty taxes that only helped drive the cost of the build even higher. All of the pieces that arrived were thoroughly cleaned, straightened and chrome or gold plated.

As with any modern lowrider build, the decision between hydraulics and air ride has to be addressed at some point. In this instance, dealing with the rough roads of Thailand meant that an air suspension set up made the most sense and gives Note the control and ride comfort he needs to maintain the car’s street time. Fully aired out, the reconditioned body drops gently over Zenith wire wheels, imported from California and still kept in their original condition.

Inside, modern gauges fit within the factory dash that’s been restored and refinished, along with the seats, door panels and roof liner, and includes all of the period-correct touches that Note felt were necessary to complete his vision of the perfect lowrider build. That vision is worlds apart from what locals are used to seeing and, as you might imagine, cruising through his local streets turns every head on the block.

Truth be told, Thailand’s automotive enthusiast circle is often focused on Japanese vehicles, usually heavily modified for race duty, and the country is well-known for churning out some incredibly potent and often off-the-wall engine swaps. That fact alone makes Volcano Custom Thailand even more unique in that their shop cars and customer builds are based solely on American classics, like this Bel Air, and their efforts and love for lowriders are helping to spread the culture even further.