Newsletter
Sign Up today for our FREE Newsletter and get the latest articles and news delivered right to your inbox.
Home » LOWRIDER Roll Models Ep. 44: Rafael Perez – The Ultimate Sacrifice 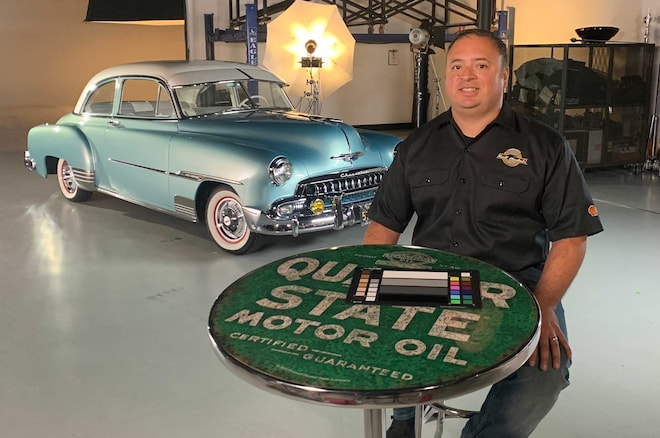 After his parents immigrated to the U.S. from Michoacán, Mexico, Rafael Perez found himself in a far but not too distant land. They were now in the land of opportunity, and this fresh start meant a new beginning and fresh experiences. While living with his grandparents, Rafael was exposed to the world of lowriding by his Uncle Lu and it didn’t take long for him to get hooked. Soon after Rafael found himself waiting for the delivery guy at the convenience store. He waited each month for them to drop off the latest issue of Lowrider magazine and would use them as inspiration to build a tiny collection of model cars. From there, he would go on to create a lowrider bike, and as he got older, he used his resources at the local college to build an ’85 Cutlass, which he wound up flipping in order to get his dream car: A 1950 Chevy Deluxe.

The Chevy Deluxe was always at the top of his list, and after plenty of sweat, tears, time and money, it was finally complete. As life would have it, he then wanted to pursue a college education, but with little to no money, his father suggested he sell his lowrider. It was a heartbreaking decision for Rafael, but as he shared his dilemma with fellow members at a Nite Life Car Club meeting, Rafael remembers the guys telling him, “Don’t be stupid. Go to college because lowriding will always be here for you when you graduate.”

Not too long after that, he sold the car, enrolled at San Diego State and became involved in leadership positions. Fast-forward to the present day, Rafael has used his collective life experiences to build a life worth noting. As an award-winning realtor (who landed local fame by being the first rapping realtor), he’s a marketing whiz who also happens to be a teacher, community leader and City Commissioner, but above it all, he’s a father and avid lowrider who carries on with his mission to promote economic empowerment in his community through education, homeownership, and entrepreneurship. Click on over to our latest episode of “Roll Models” and be sure to catch his full story because he has plenty to share.